To Save Merger, U.S. Airways, American May Seek Changes at Reagan National 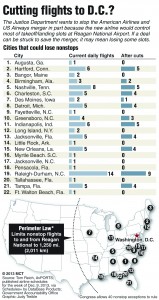 The fate of an $11 billion deal to create the world’s largest airline might hinge in large part on one airport, but not just any airport: It’s the one right across the Potomac River from the nation’s capital.

When the Justice Department sued in August to block the merger of American Airlines and US Airways, it cited the deal’s potential impact on Ronald Reagan Washington National Airport. The combined airline would control 69 percent of the takeoff and landing slots at the terminal, a deal-breaker for the department’s antitrust division.

“Blocking the merger will preserve current competition and service at Reagan National Airport, including flights that US Airways currently offers to large and small communities around the country,” Assistant Attorney General Bill Baer said when he announced the lawsuit in August.

While the two sides are preparing to go to trial late this month, they brought in a mediator last week to work out possible solutions. If the airlines and the government settle the case before going to court, aviation observers think that any deal would involve the merged airline giving up some of its dominance in Washington.

On Monday, Attorney General Eric Holder said at a news conference that “divestitures of facilities at key constrained airports” would be part of any resolution to the case.

But other carriers that might take over the slots might not be interested in flying to markets with lower traffic, perhaps one or two direct flights a day in smaller regional jets.

“The new American is the only airline that can feasibly serve those markets,” said Tom Reich, the director of air service development at AvPORTS, a consulting firm in Dulles, Va., that owns and manages air facilities.

Reagan National’s unusual location, noise restrictions and congressionally imposed rules limit the number of flights and the distances they can travel.

“You’ve got some markets that simply won’t be served,” said Bob Mann, an aviation analyst and consultant based in Port Washington, N.Y. “Some of those people are going to lose service.”

The Washington area is served by two other major airports, Dulles International and Baltimore-Washington International Thurgood Marshall, but they’re at least half an hour away. For most visitors and lawmakers, Reagan National is the most convenient gateway. It’s a short subway or taxi ride from monuments, museums and the U.S. Capitol.

Since the airlines announced their intent to merge in February, lawmakers with smaller airports in their districts that now are served directly from Washington have worried they might lose those connections. Anticipating that the Justice Department might force the merged company to divest some of its slots at Reagan National, more than 100 members of the House of Representatives asked Holder in May to consider the impact.

“Requiring a reduction of slots by the merged company could reduce the flights to our communities and the economic benefits these flights provide,” they wrote in a letter to Holder.

For example, US Airways has direct flights from Washington to several smaller airports in North Carolina and South Carolina. The merged company might decide it could serve communities such as Myrtle Beach, S.C., or Fayetteville, N.C., through its hub in Charlotte, N.C., instead. The new American would dominate Charlotte as well, but without Reagan National’s constraints and with connections to more destinations. Still, Mann said, it may be less than ideal.

“Charlotte is a vibrant connecting opportunity, but given the choice, everyone wants to fly nonstop,” he said.

Reagan National is unique among the nation’s major airports because of long-standing restrictions on operations due to congestion and other concerns. For instance: To control noise, planes can’t take off between 10 p.m. and 7 a.m., and they must navigate around Washington’s heavily guarded airspace.

To the merger’s opponents, however, simply handing over American’s slots to other carriers wouldn’t make much difference.

“Not every deal should be fixed or is fixable,” said Diana Moss, vice president and director of the American Antitrust Institute, who has testified against the merger in Congress.

This article appeared in print on page 5 of the November 6th, 2013 edition of Hamodia.