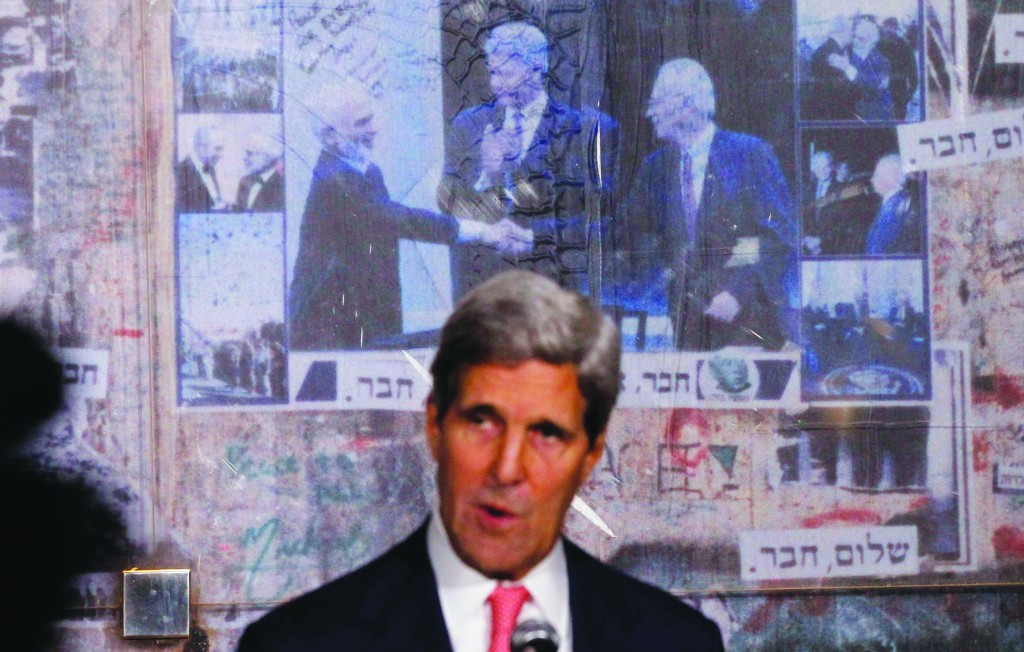 After three months of meetings and two rounds of prisoner releases, Israeli and Palestinian negotiators have reached agreement on one thing only — the talks are going nowhere.

Such was the grim reality awaiting Secretary of State John Kerry, who arrived in Yerushalayim on Tuesday evening.

As the Kerry-go-round appeared to grind to a halt this week and frustrations boiled to the surface, the curtain of secrecy which has kept details of the talks from the media began to fall away.

“The Palestinians are not conducting the talks in good faith,” interior Minister Gideon Saar told Army Radio. “(The Palestinians) are locked in their positions and are showing no flexibility on their starting positions.”

In a speech broadcast on Monday, Palestinian Authority President Mahmoud Abbas said: “After all the rounds of negotiations there is nothing on the ground.”

The issue of “linkage” between the release of prisoners and building over the Green Line emerged in recent days as a new point of dispute.

Israeli Prime Minister Binyamin Netanyahu accused the Palestinians of reneging on what he said was an agreed linkage, acquiescing to new housing starts in return for the release of 104 terrorist prisoners, 52 of whom have already been returned.

“If they can’t even … stand beside and behind the agreements that we had, that we release prisoners but we continue building, then how can I see that they’ll actually stand by the larger issues?” Netanyahu said in an interview with Israeli media.

Abbas, speaking to his Fatah party on Sunday, rejected any such linkage, and warned that “this equation could blow up the talks” and “there could be tensions soon.”

Israel Radio reported on Tuesday that the final status of Yerushalayim has been a major stumbling block, not only with the Palestinians but among the Israelis themselves. Chief negotiator Tzipi Livni and Prime Minister Binyamin Netanyahu’s personal representative, Yitzchak Molcho, have come to loggerheads regarding the size of the area designated for the free movement of Israelis and Palestinians in the capital.

According to the report, Molcho asked to restrict the boundaries as much as possible, bordering on east Yerushalayim, while Livni showed more flexibility. Other border questions, such as an Israeli security presence in the Jordan Valley, and the disposition of Jewish communities in Yehudah and Shomron, including some outside the major blocs, such as Psagot and Beit-El, remain unresolved.

Meanwhile, Finance Minister Yair Lapid declared to Israel Radio on Tuesday that Yerushalayim is not on the agenda because it will never be divided.

“If the Palestinians want a state, then they must know that this has a price and they will not get everything they want,” Lapid said.

Israeli media on Monday reported that Kerry, who has given the sides nine months to reach a deal, plans in January to introduce a peace proposal if no significant progress is made.

At a news conference in Riyadh on Monday, Kerry denied the report, insisting there was no such plan “at this point in time.” He has, however, spoken publicly of possible U.S. bridging proposals if no major progress is made.

In a related development, the Almagor Terror Victims Organization decided to hold a protest outside Kerry’s hotel on Tuesday, after he refused to meet with them, The Jerusalem Post reported.

“We understand that your duty is to further the interests of the United States in the Middle East, but we object to this being done through the release of terrorists who murdered our loved ones and who are liable to murder other Jews in the future,” reads a letter from the organization to Kerry sent on Monday.

A State Department representative said that while Kerry is sympathetic to their cause, he does not have time to meet with them. However, he plans to attend a ceremony honoring the memory of victims of terror.

“Kerry is putting on a show. On the one hand, he’s going to cry at a memorial ceremony; on the other, he releases prisoners,” Almagor head Meir Indor said. “We don’t need ceremonies, we need action.”

“It’s inappropriate for him to pressure Israel to do what the Americans won’t do in their own country,” Indor said of the prisoner releases.