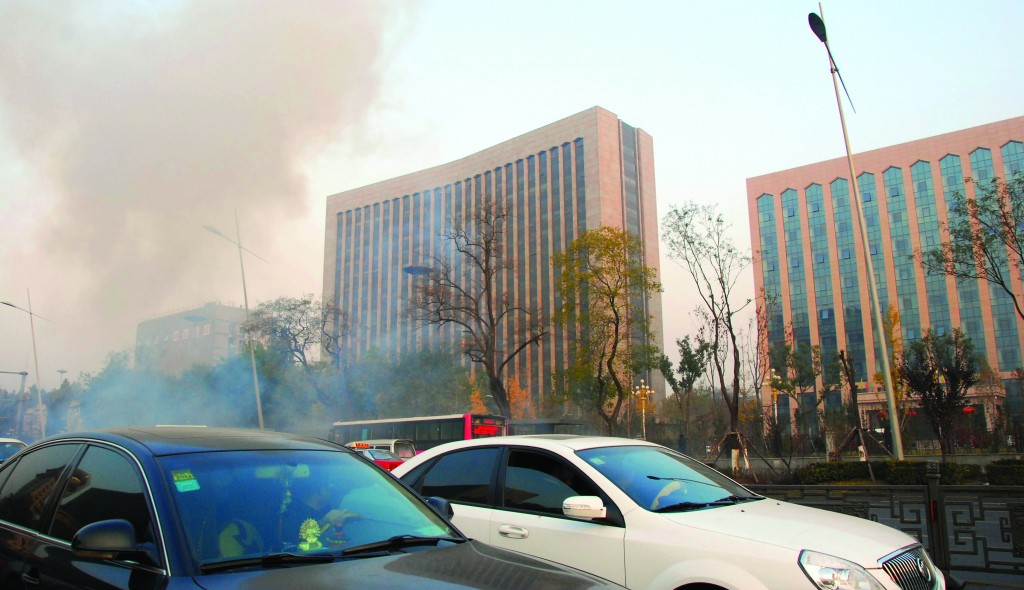 In one of the most sophisticated bombing attacks in China in recent years, seven improvised explosive devices detonated almost simultaneously during the Wednesday morning rush hour at the Communist Party headquarters in the provincial city of Taiyuan.

One person was killed and at least eight injured, one critically.

The bombs went off at 7:40 a.m., as government employees were streaming in to work, and scattered metal pellets and ball bearings through the crowds. Video footage taken at the scene showed brown smoke billowing from the compound and buses outside with shattered windows.

The bombing comes on the heels of last week’s attack at Beijing’s Tiananmen Square in which a sports utility vehicle plowed through a crowded sidewalk and then was set on fire by its occupants, three ethnic Uighurs from western China. That attack left five dead, 40 injured and stoked fears that China was being targeted in a new wave of Islamic terrorism.

The Taiyuan bombing appeared to involve more technical know-how and inside access. Video footage suggests some of the bombs were placed inside the gated compound, hidden in hedges and flower beds. Circuit boards were found on the scene, and the state press said the bombs were triggered by timers.

Explosions at government buildings in China are relatively rare, but not unprecedented.

In July, a man in a wheelchair set off a homemade explosive at Beijing’s airport to bring attention to a beating by security guards that had left him disabled. In 2011, an unemployed 52-year-old farmer, Qing Mingqi, killed himself and etwo others with consecutive explosions near government buildings in Fuzhou to protest the confiscation of his land.

In both cases, the bombers were Han Chinese, the majority.

Qing became a popular hero among many disgruntled Chinese. Already on Wednesday, some Chinese were expressing admiration for the still-unknown bomber in Taiyuan.

“It was a targeted attack on the Communist mafia. This should not be considered terrorism. The guy should be considered a national hero,” wrote an activist, calling himself Jian Alan Huang.

Taiyuan lies 250 miles southwest of Beijing and is the capital of a province known for its coal mining. There have been frequent protests in the city by laid-off employees of state-owned enterprises.