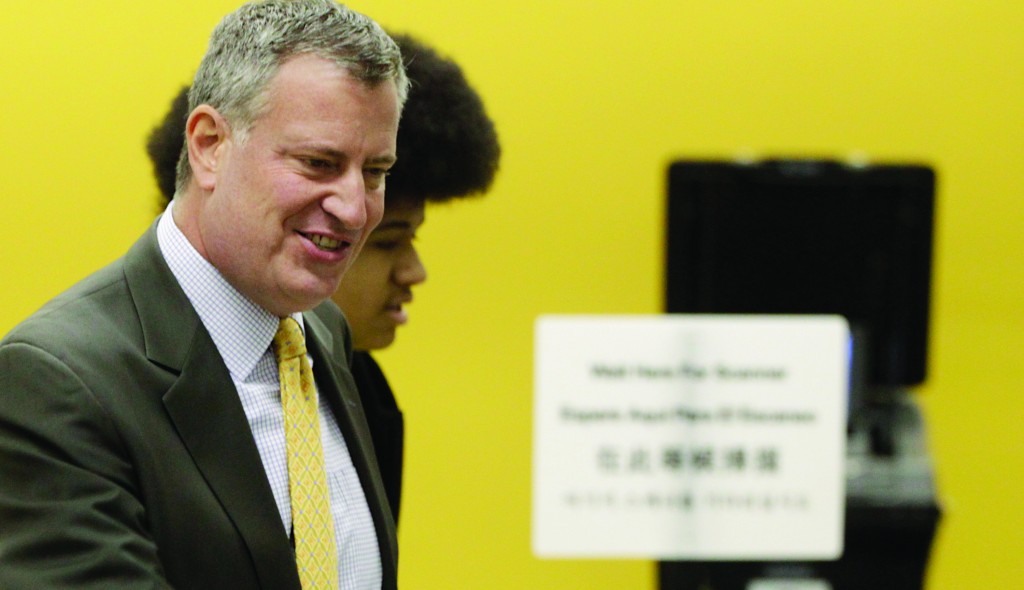 Both of the candidates were Democrats, but Hynes ran on the Republican and Conservative party lines after losing the Democratic primary in September.

Hynes took a gamble that voters in Brooklyn, in which Democrats outnumber Republicans by more than 7-in-1, will ignore party labels and re-elect the 24-year incumbent, but that did not happen.

New York voters bet big Tuesday on casino gambling as an economic energy shot, agreeing to let seven casinos be built around the state, including eventually in New York City.

In a measure that became a referendum on the job-creating potential and social price of gambling, a constitutional amendment allowing the casinos was approved 57 percent to 43 percent, with 60 percent of the vote counted.

The vote was a major win for Gov. Andrew Cuomo, who proposed casinos as a way to aid the long-distressed upstate economy. The first four casinos would be built upstate, at sites to be chosen by developers. A New York City casino would be built in seven years and possibly more could be built in the suburbs, although some casino operators say the law could allow that sooner.

Orthodox groups had lobbied against the referendum, citing the social costs of gambling. But the Cuomo administration secured broad support among organizations that would get a piece of the gambling revenue, including businesses hoping for spinoff effects and unions that would benefit from construction and more school aid. Cuomo framed the referendum not as a question on gambling, but as a way to capture what he said is $1.2 billion a year in current gambling revenue that New Yorkers now spend at casinos elsewhere.

In another referendum, voters rejected raising the age of judges from 70 to 80, forcing a mandatory retirement over the next four years for four conservative judges appointed by former Republican Gov. George Pataki.

His victory, coming weeks before he ascends the powerful chairmanship of the Republican Governors Association, gives him the one-two punch to deliver favors to governors in strategic primary states. His ability to draw support from Democrats, independents and minorities, much as George W. Bush did in his re-election race as governor in Texas in 1998, may give him fodder to argue that that he is the most electable in what might well be a crowded presidential primary field.

Christie was opposed for re-election by state Sen. Barbara Buono, who drew little if any support from her national, or even state, party. She called Christie early Tuesday night to concede, but was bitter at the Democrats for their lack of backing.

“The Democratic political bosses, some elected some not, made a deal with this governor despite him representing almost everything they’re against,” she said in her concession speech. “They didn’t do it for the state. They did it to help themselves politically and financially. But we did it our way and I’m proud of that.”

Preliminary results of an exit poll in New Jersey suggest that about half of New Jersey voters  think Christie would make a good president, yet he would lag behind Hillary Clinton in a hypothetical 2016 matchup.

Despite a concerted bloc of Orthodox voters in Monsey, Ed Day was declared victor in the trace to replace outgoing Rockland County Executive Scott Vanderhoef, who decided not to seek re-election after almost two decades in office.

Day defeated Democrat David Fried, who was supported by a solid bloc of 12,000 Orthodox votes over Day’s controversial positions, which some deemed to be anti-Semitic. Day’s nomination was fueled by Preserve Ramapo groups, who want to take away funding from yeshivos and private schools to restore it solely for the village’s dwindling public school system.

As we went to print, Democrat Chaim Deutsch was leading 49 to 44 percent over former state Sen. David Storobin to become the city’s second frum lawmaker, with a difference of about 500 votes separating the two.

Republican Edward Mangano, the Nassau County executive whose 2009 victory was the first test of the fledgling tea party, kept his seat, winning over former executive Thomas Suozzi, a Democrat who brought in big guns such as Bill Clinton to campaign for him. With 89 percent of the vote counted, unofficial results showed Mangano leading Suozzi 59 percent to 41 percent.

In Westchester County, Rob Astorino, a rising Republican star in the state, fought off a challenge from Democrat Noam Bramson.