As partisanship renders Washington largely dysfunctional, voters in two states signaled this week that they want consensus-building even when there’s divided government.

Even so, heading into a 2014 midterm election year, Tuesday’s results in New Jersey and Virginia carry plenty of warning signs for both parties that despite the voter angst, hyper-partisanship still is likely to rule, especially on debates over the budget and health care.

In reliably Democratic New Jersey, Republican Gov. Chris Christie easily won a second term with support from voters who aligned with President Barack Obama last November. Those same voters kept Democrats in charge of the New Jersey Legislature, even as they gave the popular governor a boost as he considers running for the GOP presidential nomination in 2016.

In Virginia, one of the nation’s most competitive states, longtime Democratic Party power broker Terry McAuliffe defeated Republican Attorney General Bob Cuccinelli by a narrow margin for governor, but Republicans retained control of the House of Delegates. The state Senate remains up for grabs in a coming special election.

McAuliffe and Christie each embraced the notion of bipartisanship in their victory. But exit polls and immediate reactions from national party players — including tea party activists — suggest that Republicans and Democrats are likely to remain entrenched in their partisan positions.

During the campaign, McAuliffe hammered Cuccinelli as a tea party conservative, hardliner on social issues and cheerleader for the national Republicans whose opposition to the health care law helped trigger the partial government shutdown in October. Cuccinelli saddled McAuliffe with the clumsy implementation of Obama’s signature law. Both strategies resonated, but Democrats say McAuliffe’s victory proves which mattered more and portends a Democratic advantage in Senate and governors’ races next year.

“Ken Cuccinelli made this race a referendum on Obamacare,” said Mo Elleithee, a Democratic National Committee spokesman. Democrats “made it a referendum on the shutdown and extremism. We won.” 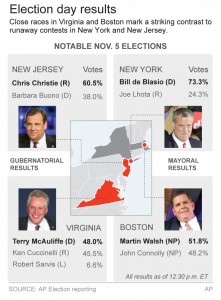 Virginia exit polls found that 42 percent of voters oppose the tea party movement, while just 28 percent said they support it. But on the question of blame for the shutdown, the difference was essentially the same as McAuliffe’s margin of victory: 48 percent blamed Republicans in Congress, with 88 percent of those people voting for McAuliffe; 45 percent blamed Obama, with 87 percent of them opting for Cuccinelli.

At the Democrats’ national Senate campaign office, spokesman Matt Canter noted that in competitive GOP Senate primaries around the country, all candidates have embraced the shutdown. Meanwhile, congressional Republicans running for the Senate without tough primary opposition — Tom Cotton in Arkansas and Shelley Moore Capito in West Virginia — voted for the temporary fix. “They know it’s awful politics for them,” Canter said.

But Democrats’ interpretation ignores voter dissatisfaction with the health-care law. Half of New Jersey voters and 53 percent of Virginia voters said they opposed it, and the two Democratic governor candidates got 11 percent and 14 percent of those voters.

That encourages Republicans, said Louisiana Gov. Bobby Jindal, chairman of the GOP’s national governor’s association, particularly given McAuliffe’s considerable financial advantage over Cuccinelli. “Voters are very frustrated with the dysfunction of Washington, very frustrated with the incompetent rollout of Obamacare,” Jindal said, “and they’re taking out that frustration on the party that occupies the White House.”

“Gov. Christie ran against Obamacare and on the economy and jobs, and when Ken Cuccinelli started talking about those things, he took off,” said Tea Party Express Chairwoman Amy Kremer, whose group helped elect conservatives like Sen. Ted Cruz of Texas.

Kremer said the push from Cruz and others to defund the healthcare law may not have been successful. “But without it,” she said, “Obamacare wouldn’t have the profile that it does right now.”

This article appeared in print on page 8 of the November 7th, 2013 edition of Hamodia.