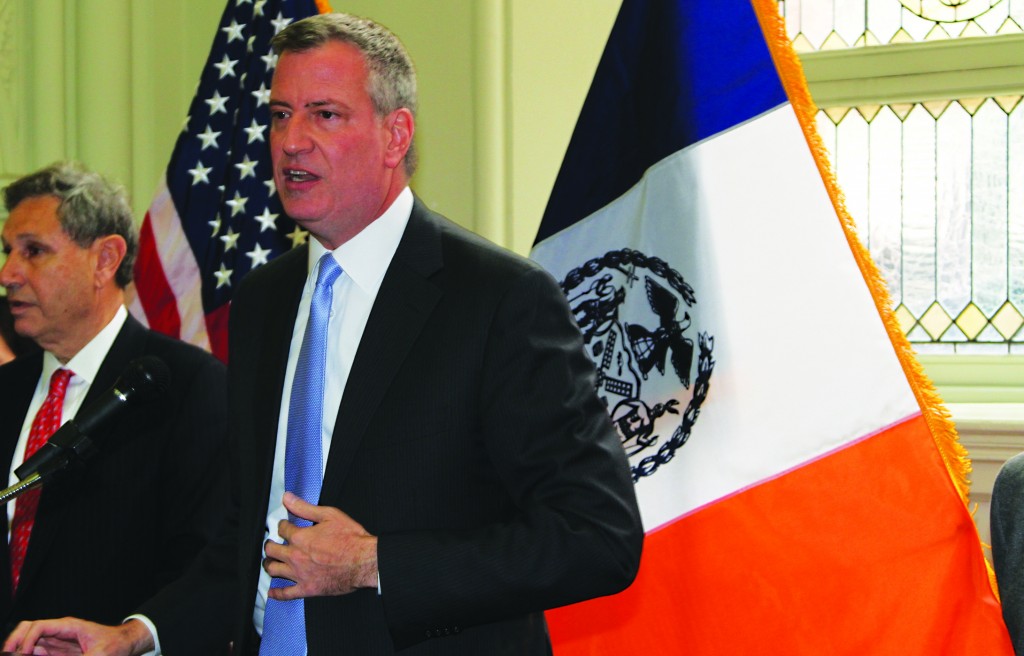 Hamodia was on hand Wednesday morning for  Bill de Blasio’s first press conference as Mayor-Elect, at which Mr. de Blasio made several statements regarding plans for his transition team.

Mr. de Blasio noted that there are only 55 days between now and inauguration, time in which he must get his team up and running. However, he fully anticipated meeting that goal.

De Blasio introduced the two co-chairs he has selected to lead his transition team: Ms. Jennifer Jones Austin and Mr. Carl Weisbrod, both of whom, he said, “reflect the diversity” of the city.

De Blasio noted that both of these appointees have proven track records of successfully helping the city to grow. Ms. Austin is CEO/Executive Director at The Federation of Protestant Welfare Agencies (FPWA) in New York City, which is involved in helping the needy.

Mr. Weisbrod brings to the position success in urban revitalization initiatives, among them helping to stabilize lower Manhattan after 9/11.

Both Ms. Austin and Mr. Weisbrod spoke briefly, and then the floor was opened for questions from the press.

The big question in the room was, “Who will the be the next Police Commissioner?” The Mayor-Elect responded that “it is a weighty decision and must be handled carefully,” and offered the names of some possible candidates.

Last, Mr. de Blasio met with Mayor Bloomberg, who greeted him cordially. The two reviewed some issues important to a smooth transition.

Mr. de Blasio said he fully expects his team to be up and running by November 12. He  also announced that he would welcome ideas, suggestions and resumes from anyone wishing to join his team.