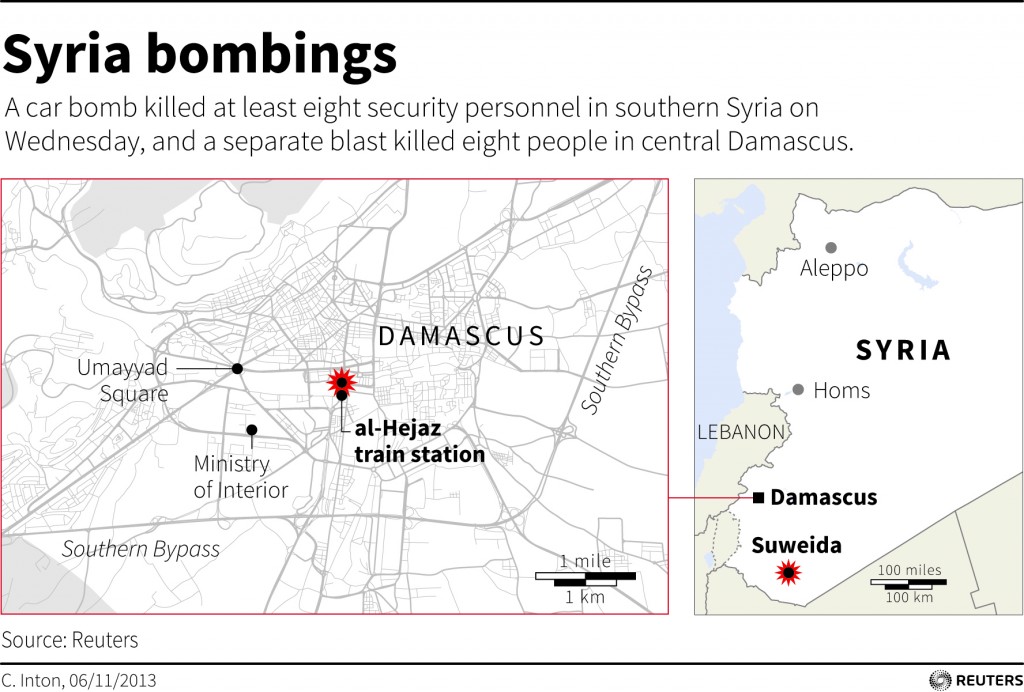 A car bomb killed at least eight security personnel in an attack on a military intelligence headquarters in the southern Syrian city of Suweida on Wednesday, and a separate blast killed eight people in Damascus.

The pro-opposition Syrian Observatory for Human Rights monitoring group said the car bomb in Suweida, which had largely been spared violence in Syria’s civil war, had also wounded dozens.

The Observatory’s head, Rami Abdelrahman, said a major — earlier identified as a colonel — was among security officers killed in the blast at the regional Air Force Intelligence headquarters. He was believed to be the head of the branch. Locals told the Observatory a second officer may also have died.

Local opposition activists said a suicide bomber had sped through a checkpoint outside the headquarters and blown up his car. Rebels then tried to storm the building and clashes erupted, they said, killing several opposition fighters. A photograph uploaded by activists showed a thick column of smoke rising above the Suweida skyline.

The state news agency SANA said the Suweida blast wounded 41 people but made no mention of the target, saying only that a “terrorist” car bomb had hit a square in the city.

State media often use the word “terrorist” to describe rebels fighting to topple President Bashar al-Assad in a struggle that has cost well over 100,000 lives since it began in March 2011.

The government-controlled Suweida region is home to many Druze, who have mostly stayed neutral in the conflict, although some have joined paramilitary forces supporting Assad.

Earlier in the day, SANA said an improvised bomb had exploded in Hejaz Square in the crowded heart of Damascus, killing eight people and wounding at least 50.

The British-based Observatory, which has a network of activists across Syria, put the toll there at seven dead and at least 20 wounded. It cited conflicting reports from activists as to whether the explosion was caused by a bomb or a mortar shell.

Rebels have seized a ring of suburbs outside the capital, but the army has blockaded these areas to try to keep central Damascus secure. Insurgents have resorted to improvised bombs to strike security and political targets in government-held areas.

Damascus residents reported seeing a mortar bomb land near the army’s General Staff headquarters in Umayyad Square, a big intersection, on Wednesday. They had no word on casualties.