BlackBerry to Focus on Software – Not Devices 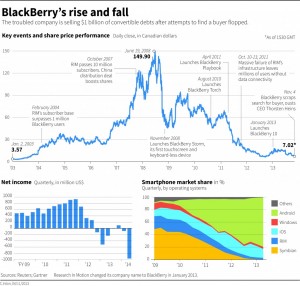 Those few BlackBerry lovers left could be in for some bad news.

Its new chairman and interim chief executive says he wants to emphasize software and services — not devices. That could mean the company might ultimately get out of the business of selling smartphones.

The possible change in strategy comes as Fairfax Financial, BlackBerry’s largest shareholder with a 10 percent stake, said Monday it won’t buy the struggling smartphone company and take it private. It said that instead, Fairfax and other investors will inject $1 billion as part of a revised investment proposal.

CEO Thorsten Heins is stepping down, and John Chen was appointed chairman of BlackBerry’s board of directors and interim CEO. Chen, the former CEO of software data company Sybase, told The Associated Press on Monday that BlackBerry employees need to start thinking differently about the company and accept that “we’re really not in phones, but we’re in phones for software, for services.”

Chen said he wants to find a CEO with a strong software and services background.

“I’d like to find somebody to help me monetize that,” Chen said.

“They are not just going to shut the lights off,” Gillis said.

The decline of the BlackBerry has come shockingly fast. In 1999, BlackBerry became a game-changing breakthrough in personal connectedness. It changed the culture by allowing on-the-go business people to access wireless email. President Barack Obama couldn’t bear to part with his BlackBerry. Oprah Winfrey declared it one of her “favorite things.”

Then came a new generation of competing smartphones, and suddenly, the BlackBerry looked ancient. Apple debuted the iPhone in 2007, and showed that phones can handle much more than email and phone calls. In the years since, BlackBerry Ltd. has been hammered by competition from the iPhone as well as Android-based rivals.

This year’s much-delayed launch of the BlackBerry 10 system and the fancier devices that use it was supposed to rejuvenate the brand and lure customers. It did not work. Waterloo, Ontario-based BlackBerry recently announced 4,500 layoffs, or 40 percent of its global workforce, and reported a quarterly loss of nearly $1 billion.

“Sadly, I think they are already out of the business after the BlackBerry 10 flop,” said Mike Walkley, an analyst with Canaccord Genuity.

Walkley said he believes BlackBerry will focus on its mobile device management business, which allows IT departments to manage different devices connected to their corporate networks.