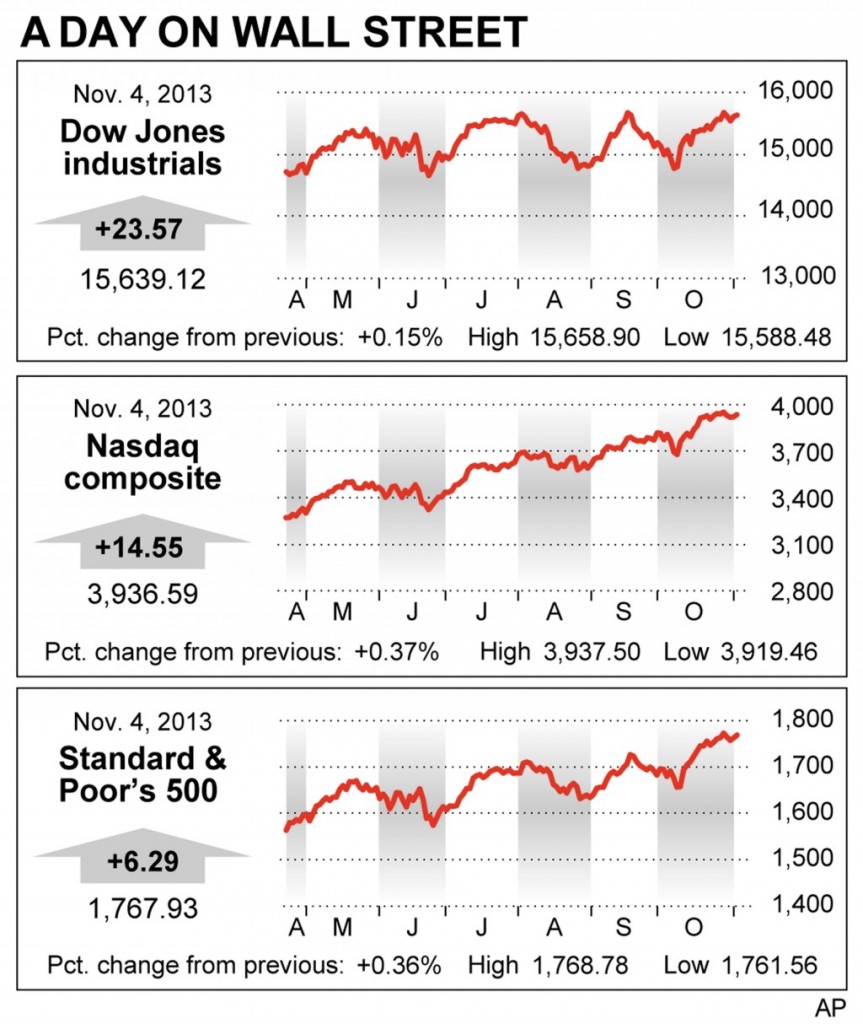 There was no dramatic rally and no records were set. But stocks finished with small gains sprinkled across industries from airlines to steelmakers as the big indexes continued to trade near record highs.

All 10 industries tracked in the Standard & Poor’s 500 index rose. Twice as many stocks rose as fell. The Russell 2000 index of smaller companies rose more than one percent, the biggest gain among U.S. market benchmarks.

And some industries rose sharply, including steelmakers, homebuilders, and airlines.

While Monday’s gains were modest, they continued a powerful rally in the market that has driven the S&P 500 index up nearly 24 percent this year. The S&P 500 closed at records seven times in October, most recently on Oct. 29, when it set its current all-time high of 1,771.95

Homebuilders gained after Tri Pointe Homes said it would combine with Weyerhaeuser’s home building business in a $2.7 billion deal. Last week homebuilders fell after the Federal Reserve said in a policy statement that the recovery in that sector has “slowed somewhat” in recent months.

So far during the third-quarter earnings season, 68 percent of companies that have reported have beaten analysts’ estimates, according to S&P Capital IQ. But 60 of the 78 companies that provided fourth-quarter forecasts came in lower than analysts were expecting.

“Generally earnings have been okay, but revenues have been a little bit light,” said Lawrence Creatura, portfolio manager for the Clover Small Value Fund at Federated Investors.

“Management teams seem to be getting it done through cost-cutting rather than vibrant organic growth. The economy is growing slowly, stubbornly slowly,” Creatura said.

With just 14 companies reporting earnings on Monday, some investors were on the sidelines. The pace picks up on Tuesday. Investors were also looking ahead to a highly anticipated public offering Thursday and the Labor Department’s employment survey on Friday.

Eleven other companies are also expected to bring IPOs this week. That means this week will be tied for the busiest of the year.

“[Social media] really reawakened the retail investor,” said Kim Forrest, an analyst at Fort Pitt Capital Group. “Maybe they’re responsible for the market drifting up the way it has today.”

Airline stocks rose after reports that US Airways Group Inc. and American Airlines, which are seeking a merger, are in talks with the Justice Department to resolve antitrust concerns before a trial later this month.

The news helped push Delta Air Lines to touch an all-time high of $27.78. It closed higher by 80 cents, or 3 percent, at $27.44. Delta and JetBlue Airways were the biggest gainers in the Dow Jones transportation index, which set its own an all-time high. JetBlue rose 28 cents, or 3.9 percent, to close at $7.55.

BlackBerry plunged $1.27, or more than 16 percent, to $6.50 after calling off its effort to find a buyer and replacing its CEO. The smartphone maker has been losing customers to Apple’s iPhones and phones that run Google’s Android software.