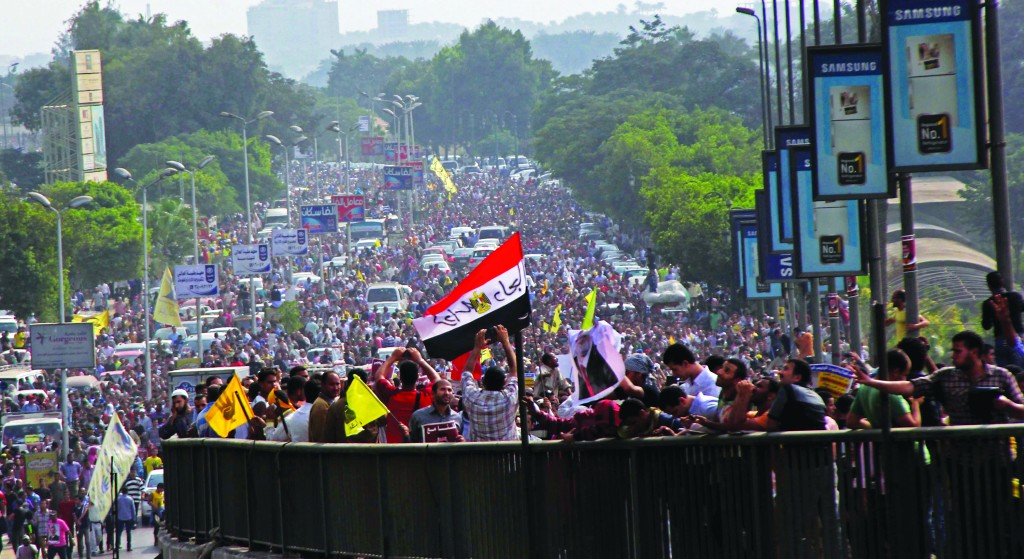 Ousted President Mohammed Morsi refused to wear a prison jumpsuit, entering the caged dock in a dark business suit as his co-defendants applauded. He defiantly questioned the legitimacy of the court and proclaimed himself still Egypt’s leader. His fellow Muslim Brotherhood members chanted, “Down with military rule!”

Morsi’s long-awaited trial got off to a chaotic start Monday, with outbursts and interruptions, and it was quickly adjourned until Jan. 8.

The dramatic first public appearance for Morsi since the July 3 military coup that removed him from power was meant to be a step toward due process. Instead, it highlighted the challenges facing Egypt’s interim authorities as they attempt to close a chapter of his presidency, while his Islamist supporters seek to disrupt the effort.

Morsi and 14 co-defendants —seven of whom are still at large — are charged with inciting the killing of protesters who massed outside the presidential palace in December 2012 and demanded that he call off a referendum on a new Islamist-drafted constitution. Brotherhood members attacked a sit-in by the protesters, sparking clashes that left 10 people dead.

Before Monday’s session began, silent video broadcast on state media showed Morsi arriving in a minibus outside the makeshift courtroom at a police academy in eastern Cairo. He wore a dark suit, light shirt and no tie, and was flanked by burly policemen.

A smiling Morsi later walked into the cage in the court — still in the same garb, unlike his co-defendants in white prison jumpsuits. They stood in two lines like a presidential honor guard, applauding and raising their hands in a four-fingered gesture — commemorating the hundreds of his supporters killed when security forces moved to clear protest encampments in August. Another defendant — an aide held with him in the secret military location — also was in a suit.

Healthy-looking after four months of secret detention, the 62-year-old Morsi immediately started talking even before Judge Ahmed Sabry Youssef gave him the floor.

“What is going on now is a cover for a military coup,” Morsi shouted in a voice that echoed through the courtroom. “I warn everybody…. I wish that the Egyptian judiciary would not become one day a cover for the military coup.”

The defense lawyers clapped. Chants from his fellow defendants followed: “Down, down with military rule!”

“This is enough. The court wants to carry on and provide you with the guarantees necessary” for a fair trial, he said.

But Morsi repeated at least four times, “I am the president of the republic.”

He rejected the proceedings and said he had been forced to attend. “I am here by force and against my will. The coup is a crime and treason,” he said

Morsi refused to enter a plea and demanded that he be given a microphone, although his voice was loud enough for everyone in the courtroom to hear.

“This is not my court,” Morsi went on. “This court, with all due respect, doesn’t have jurisdiction over the president. There is a military coup in this country. The leaders of this coup must be brought to trial according to the constitution.”

At one point, some journalists in court shouted: “Execution, you will get execution, Morsi!”

Morsi had set the unruly tone, interrupting the judge, speaking when he wanted to, and once even talking over a defense lawyer. “I want to comment here,” he said.

“You are not paying attention. You will get the chance to speak,” the judge told him.

Snapped el-Beltagy: “It is you who is not paying attention.”

After a rowdy 10 minutes, Youssef adjourned the session because of the interruptions. When it resumed more than 75 minutes later, the lawyers had had their first meeting with Morsi and the co-defendants.

Lawyer Mohammed El-Damaty said Morsi spent most of the time inquiring about conditions in Egypt, his supporters and what happened during his detention.

Reporters in the courtroom were not allowed to bring cameras, computers or cellphones as authorities sought to keep tight control on the proceedings.

If convicted, Morsi and the other defendants could face the death penalty.

After the adjournment, Morsi was taken to Bourg el-Arab, a prison in the desert near the Mediterranean city of Alexandra. His co-defendants are being held in a prison near Cairo.

The military says it removed Morsi only after millions of Egyptians marched in the streets demanding his ouster, accusing him and the Brotherhood of trying to subvert the law and impose their will on the country during his year in office.

Morsi’s supporters accuse the military of crushing Egypt’s nascent democracy by overturning the results of multiple elections won by the Islamists since the 2011 fall of Hosni Mubarak.