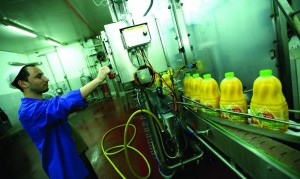 High hopes at the Health Ministry for a new era of nutrition-conscious consumption have run into robust opposition from Israeli food manufacturers, reports Haaretz.

They say that legislation requiring the printing of nutritional information on the front of packages would result in higher retail prices for their products.

The Knesset Labor, Welfare and Health Committee has approved the bill, which the ministry believes will lower obesity rates and promote healthy consumer choices. The Knesset is expected to pass it this winter.

The goal of its front-of-package labeling is to make shoppers more aware of the nutritional content of the food they buy, including the calorie count and sugar, sodium and saturated fat content.

But the food industry is not so optimistic.

“In the U.S., high hopes were pinned on product labeling as part of the struggle against the obesity problem, but the reality was disappointing,” said executive director of the Food Industries Association Ornit Raz. “In the professional literature, labeling was found to have a negligible effect on consumer behavior.”

Itzhak Tamir, the chairman of the Food Industries Association within the Manufacturers Association of Israel, characterized the government initiative as “questionable.”

Tamir, who is also CEO of the Central Bottling Company (Coca-Cola Israel), cited a British study that found none of 100 countries examined have adopted front-of-package labeling.

He also argued that it would be unfair to force companies to change their labels on such short notice.

The ministry further questioned the food industry’s sincerity in cooperating with the government in its effort to improve national health.

“It appears that their health slogans are just marketing and an effort to adapt to the trend and not real concern,” they said.

This article appeared in print on page 7 of the November 1st, 2013 edition of Hamodia.