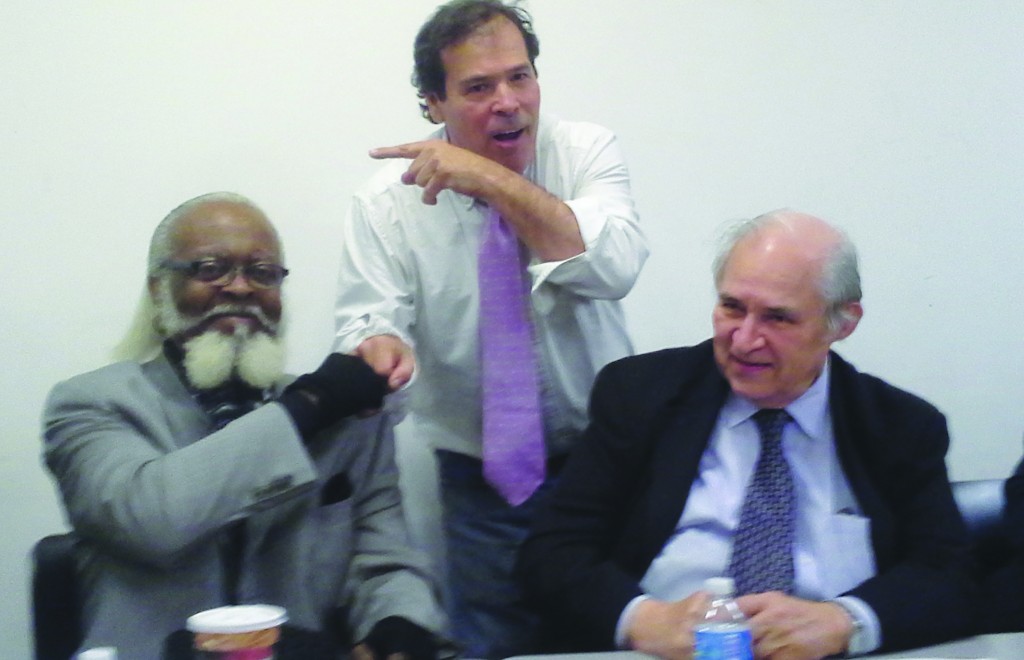 Brooklyn District Attorney Charles Hynes received a $1,000 campaign contribution from former Gov. Mario Cuomo, a Democrat who bucked his party’s demands that Hynes be shunned for running as a Republican after losing the Democratic primary.

Cuomo’s son, current Gov. Andrew Cuomo, said that “his father makes his own decisions.” The former three term governor, a longtime friend of Hynes’s, gave the money on Oct. 15, about a week after the longtime DA decided to run for reelection on the GOP and Conservative party lines after losing the primary to former prosecutor Kenneth Thompson.

A federal judge hearing arguments over controversial police tactics blasted Bill de Blasio Tuesday, saying the Democratic mayoral frontrunner wants nothing more than to have the police department run by the courts.

“The public advocate is dying to have the Police Department run by the U.S. District Court,” appellate Judge José Alberto Cabranes told lawyer John Siegal, who was representing de Blasio’s current office against the Bloomberg administration.

Siegel had argued that the court should not side with Mayor Michael Bloomberg to overturn the August court ruling that the stop-question-and-frisk tactic was discriminatory against blacks.

The city also wants the three-judge appellate panel to put a stay on Judge Shira Scheindlin’s ruling pending the appeals court decision. Scheindlin also appointed a monitor to oversee the NYPD amid allegations that they were discriminating against minorities, and called for cops to wear body cameras on patrol.

Wiley Norvell, a spokesman for de Blasio, said that “Judge Cabranes was injecting some humor and, as those in the room could tell, made a sarcastic joke. Regrettably, not everyone has a sense of humor.”

Siegal later said that de Blasio, if elected mayor, would leave the running of the NYPD to the police commissioner and that a court-appointed monitor tapped to oversee policy changes would only be on the job “temporarily” with a “limited role” related to changes to stop-and-frisk.”

With less than a week to election day, Democrat Bill de Blasio’s mammoth lead over Republican Joe Lhota holds, but fell below a 40-point margin for the first time, according to a poll released Wednesday.

De Blasio leads Lhota 65 to 26 percent in the poll. Also, a slim majority of 43 to 42 percent say he won’t be able to keep his many campaign promises if elected.

“They’ll vote — big — for Public Advocate Bill de Blasio, but they’re skeptical about those big campaign promises,” said Quinnipiac pollster Maurice Carroll. “It’s a wipe-out, more than 2-1 for the Democratic candidate. Voters have gotten to know Republican Joe Lhota better, but they don’t like him any better.”

Among African American voters, a whopping 90 percent support de Blasio, who has featured his biracial family prominently in his campaign. Only 1 percent of blacks say they will vote for Lhota. De Blasio also leads among whites by a strong 51 to 40 percent margin.

De Blasio’s five-point drop in the survey comes as the two prepare for their third and final debate Wednesday night, which likely represents Lhota’s last, best shot to break through his dismal polling numbers.

Lhota, a one-time deputy mayor to Rudolph Giuliani, delivered perhaps his finest moment of the campaign in their debate last week. He and de Blasio traded sometimes angry barbs, frequently raising their voices over charges of race-baiting and the legacies of their one-time mentors.

But while de Blasio, the city’s public advocate, at times appeared rattled during the debate, Lhota is running out of time. The debate is expected to feature several Sandy-related questions which could give Lhota, who won praise for his handling of the storm response as the city’s transit chief, a chance to bolster his executive background and suggest that de Blasio has little experience running large organizations.

‘Democrats for Lhota’ Ad Urges to Vote ‘Safe Not Sorry’

“Let’s be safe with Joe Lhota and not sorry with Bill de Blasio,” urges one of the Democrats featured in the ad.

The spot comes amid voter concerns that Lhota’s last major ad was too negative. The ad, which featured images of body bags and the Crown Heights riots, was decried by de Blasio as racist.

A collection featuring the cross section of third-party candidates on Tuesday night debated their visions for the city — even if they have little chance of reaching Gracie Mansion.

The seven hopefuls who attended the event each performed according to form.

Comedian Randy Credico crowed that de Blasio’s move to the left was because of him, Hispanic pastor Erick Salgado claimed to have given de Blasio the idea of creating a municipal identification card for illegal immigrants, and Jimmy McMillan shouted once again about the rent “just being too … high.”

“There are a lot of issues in the City of New York, but if you take the right man like a father of the house — that’s me, Jimmy McMillan. I’m daddy. The city’s gonna be just fine,” McMillan declared. “Before you vote November 5th, think about your grandchildren. Don’t walk in that polling booth like you been voting. Think about your grandkids. When you walk out that door, look back. If there’s none there, think about them being there.”

Then there was Carl Person, an attorney now running as a Reform Party candidate, who proposed that instead of debating how to end wars abroad or reining in Wall Street, politicians should recognize that they cannot actually solve any of the challenges facing the city.

But it was Credico who gave the line of the night.

Paper Has Novel Way of Getting de Blasio’s Ear

When The Wave of Long Island became concerned that their repeated requests for an interview with de Blasio were not getting answered, they put a milk carton with an image of the candidate on their front page, titled “MISSING: de Blasio Ignores West End.”

Their plea was answered on Sunday, when de Blasio, on a tour of the Sandy-hit Rockaways, invited The Wave to spend 10 minutes with him at a media event before allowing the other reporters in.

“You know what you do?” Wave editor Kevin Boyle joked to the other reporters. “You put his face on a milk carton on the front page of The Wave and then you get invited in, all right?”

“My staff says The Wave is a threat to national security,” de Blasio quipped.

Bill de Blasio’s signature proposal to tax wealthy New Yorkers to pay for free pre-K faces significant headwinds in Albany, including a skittish Legislature heading into an election year and a governor who is reluctant to raise taxes and says he has his own plan.

“The reality of it is going to require an investment of time and effort and convincing, clearly, the legislative leaders,” Assembly Speaker Sheldon Silver told The Wall Street Journal Wednesday. “It may require an election in between, where this becomes the issue in the election,” he added, referring to legislative elections next year.

While Orthodox families would not gain from the pre-K plan, which is limited to public schools, they stand to benefit from the $190 million allotted for after-school programs.

But de Blasio has yet to win over Gov. Andrew Cuomo and Senate Majority Leader Dean Skelos, a Long Island Republican.

Skelos said that rather than raising taxes, he would fund the extra slots by using about $300 million in anticipated licensing profits to the city from an NYPD program that provides surveillance around sensitive areas in the city.

“We support the concept of universal pre-K, which would help young people learn and grow,” said Scott Reif, a Skelos spokesman. “With anything, the question is ‘How do you pay for it?’”

A de Blasio spokesman said the move wouldn’t provide enough money, and there wasn’t a guarantee the profits would continue.

De Blasio has already begun working behind-the-scenes to develop support. He met last week to discuss the proposal with Bronx state Sen. Jeff Klein, the Democratic Senate co-leader, a Klein spokesman said, who added that the senator also wants to expand preschool in the next legislative session.

Silver, who spearheaded an initial push in 1997 to fund some pre-kindergarten, said he supported de Blasio’s plan, but the candidate would have to work hard to persuade businesses this was in their best interest.

“He can convince them that for a small surcharge, the benefits for businesses ultimately will be great,” he said.

Meanwhile, Cuomo said that he supports de Blasio’s idea but not his method of funding it.

“We’ve done it without tax increases,” Cuomo said. “It’s a question of funding. But I believe in universal pre-K, I believe Bill de Blasio is exactly right that that is the direction to go. That is the road we’re on and we’re going to continue.”