National Lawmakers: Spy Programs May Have Gone Too Far
National 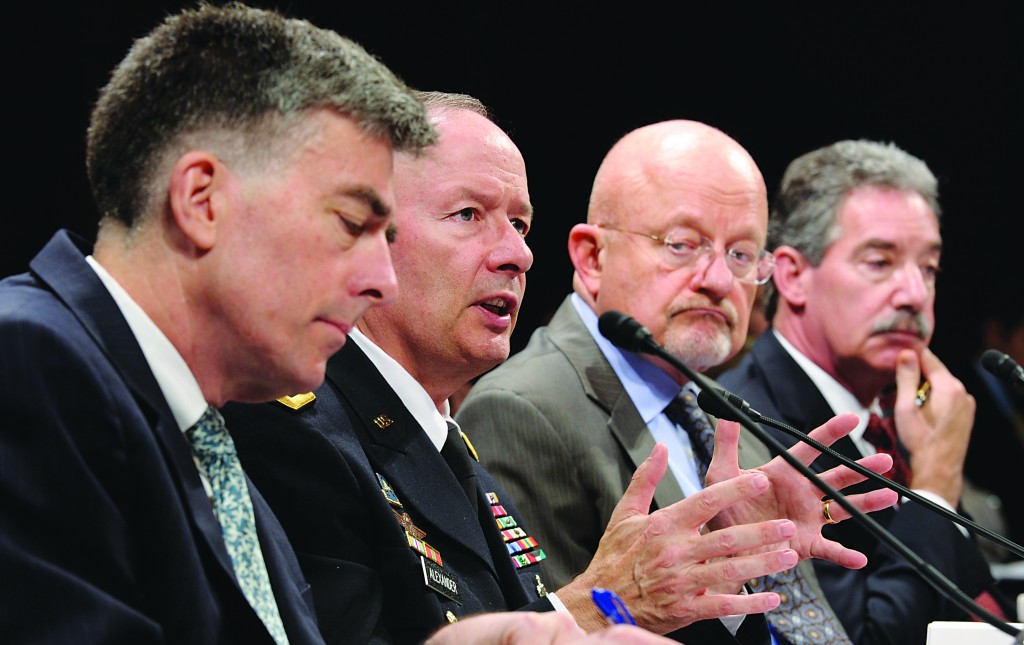 Faced with anger over revelations about U.S. spying at home and abroad, members of Congress suggested Tuesday that programs the Obama administration says are needed to combat terrorism may have gone too far.

The chairman of the House intelligence committee said it might help to disclose more about National Security Agency operations, but barring NSA from collecting millions of Americans’ phone records would scrap an important tool.

“We can’t ask the FBI to find terrorists plotting an attack and then not provide them with the information they need,” said Chairman Mike Rogers, R-Mich. He spoke at the start of a hearing where top intelligence officials were testifying, including National Security Agency Director Keith Alexander.

A bipartisan plan introduced Tuesday would end the NSA’s massive sweep of phone records, allowing the government to seek only records related to ongoing terror investigations. Critics both at home and abroad have derided the program as intrusive and a violation of privacy rights.

The proposal comes as President Barack Obama and key lawmakers are saying it’s time to look closely at surveillance programs that have angered many Americans and now are drawing complaints from world leaders because of reports that their cellphone conversations were monitored. 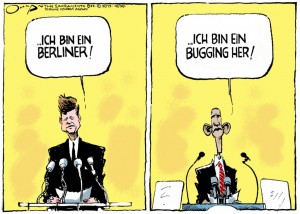 The administration tried to tamp down damage Tuesday from the months-long spying scandal — including the most recent disclosure that the National Security Agency had monitored the cellphone conversations of German Chancellor Angela Merkel. A final decision about listening in on allies has not been made, the senior official said.

The White House also faces complaints at home about the NSA collecting millions of Americans’ phone records and sweeping up Internet traffic and email. The Obama administration defends those programs as important in the fight against terrorism.

Asked about the reports of eavesdropping on world leaders, Obama said in a television interview that the U.S. government is conducting “a complete review of how our intelligence operates outside the country.” Obama declined to discuss specifics or say when he learned about the spying operations.

“What we’ve seen over the last several years is their capacities continue to develop and expand, and that’s why I’m initiating now a review to make sure that what they’re able to do doesn’t necessarily mean what they should be doing,” he said Monday.

A second U.S. official said Obama did not know the NSA was monitoring Merkel’s communications until after his visit to Germany in June. The official said information about the surveillance of foreign leaders emerged in the course of the White House’s broader review of spying programs, triggered by media reports based on documents leaked by former NSA contractor Edward Snowden. The official was not authorized to discuss the matter by name and insisted on anonymity.

The White House says the United States isn’t currently listening to Merkel’s conversations and won’t do so in the future.

On Tuesday, House Speaker John Boehner said there should be a thorough review of intelligence gathering, bearing in mind the responsibility to keep Americans safe from terrorism and the nation’s obligations to allies. 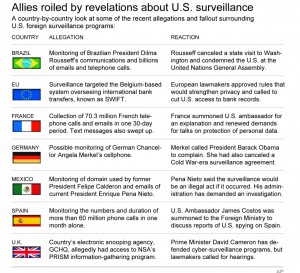 “We have to find the right balance here,” said Boehner, R-Ohio. “And clearly, we’re imbalanced.”

Sen. Dianne Feinstein, chairwoman of the Senate Intelligence Committee, called for a “total review of all intelligence programs” following the Merkel allegations. In a statement, the California Democrat said the White House had informed her that “collection on our allies will not continue.”

The senior administration official said that statement was not accurate, but added that some unspecified changes already had been made and more were being considered, including terminating the collection of communications from friendly heads of state. That official also was not authorized to divulge information about the program by name and insisted on anonymity.

Reports based on new leaks from Snowden indicate that the NSA listened in on Merkel and 34 other foreign leaders.

“With respect to NSA collection of intelligence on leaders of U.S. allies — including France, Spain, Mexico and Germany — let me state unequivocally: I am totally opposed,” Feinstein said.

In response to the revelations, German officials said Monday that the U.S. could lose access to an important law enforcement tool used to track terrorist money flows.

Other longtime allies have also expressed their displeasure about the U.S. spying on their leaders.

Spain’s prosecutor’s office said Tuesday it has opened a preliminary inquiry to determine whether a crime was committed by NSA surveillance. French President Francois Hollande said the United States should not be eavesdropping on its allies but that U.S. officials were cooperating with Europe on fixing the problem.

Belgian Prime Minister Elio Di Rupo’s office on Tuesday confirmed a report in De Standaard that at his most sensitive meetings, the premier is asking government ministers to leave their mobile phones outside the room.

As possible leverage, German authorities cited last week’s non-binding resolution by the European Parliament to suspend a post-9/11 agreement allowing the Americans access to bank transfer data to track the flow of terrorist money. A top German official said Monday she believed the Americans were using the information to gather economic intelligence apart from terrorism and said the agreement, known as SWIFT, should be suspended.

European Union officials who are in Washington to meet with lawmakers ahead of White House talks said U.S. surveillance of their people could affect negotiations over a U.S.-Europe trade agreement.