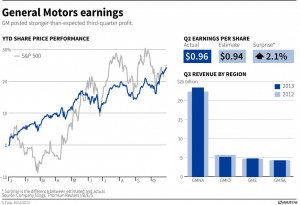 General Motors Co. said its profit fell in the third quarter, but the automaker’s results also demonstrated that its troubled European operations are improving.

GM’s profit fell 53 percent to $698 million in the quarter, compared with the same period a year earlier.

The decline came from weaker earnings in some overseas markets and special charges generated by the repurchase of preferred stock from a health care trust for UAW union retirees.

“We made gains in the third quarter as we improved our North American margins and increased our global share on the strength of our Chevrolet brand,” said Dan Akerson, GM’s chief executive.

Losses in Europe narrowed to $214 million from a deficit of $487 million. The automaker said it hopes to break even in the region by mid-decade.

Overall, GM results from regions besides North America were better than expected and dispelled “the potential for a step-back in turnaround efforts outside the U.S.,” said Brian Johnson, an analyst with Barclays Capital Inc.

While the results were good, Kelley Blue Book analysts said that Chrysler still needs to broaden its product range so that it is not so reliant on trucks.

They also noted that the company needs to replace aging models such as the Chrysler 200 and Dodge Avenger.