Running as a Challenger, Thompson Confident He’ll Be DA 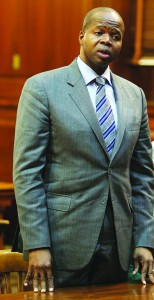 Sitting at a Flatbush fundraiser Monday morning, Kenneth Thompson looked out at the group of about 30 people he probably didn’t expect to see: Jewish donors ready to shell out political cash for his race against Brooklyn District Attorney Charles Hynes.

Thompson worked his way up in the city’s housing division to become a federal prosecutor, then a private practice lawyer, before standing on the cusp of the most powerful job in Brooklyn. He overcame the initial electoral challenge to winning the job by emerging victorious in the Sept. 10 Democratic primary against the incumbent, albeit in a race marked by low voter turnout.

While Hynes initially conceded the race, Thompson angered DA staffers when he reportedly began handing out jobs in the office before any transition work started. Hynes himself was shocked to hear that disgraced Clarence Norman Jr., a corrupt former Brooklyn Democratic party chairman he was instrumental in having jailed 10 years ago, reportedly ran Thompson’s primary day campaign.

Now that Hynes has reevaluated his chances, done the political math and rejoined the race, this time on the Republican and Conservative party lines, Thompson, who at 48 is a full generation younger than Hynes, is again fighting for a job he considers that he won already fair and square.

About 30 donors and activists munched on bagels and lox, pancakes and coffee at the fundraiser, to which Hamodia was invited.

Thompson addressed the audience briefly, throwing in his lowly upbringing in the projects, before his mother moved the family to Co-op City, which then was predominately Jewish. He recalled being the paper boy for the building, saying, “My Jewish neighbors loved me and I loved every one of them.”

Thompson’s mother was the first female NYPD cop on the beat, something which he says convinced him that he should reach higher than he thought he could. He was the attorney representing Abner Louima, who was beaten by police 20 years ago, his first big-name case, which earned him widespread recognition.

Following a stint in then-President Bill Clinton’s Justice Department, where Thompson participated in the prosecution against the Waco, Texas, cult members who killed four ATF agents, he set up a private practice together with Doug Wigdor, an Orthodox Jew.

But throughout, he says, he had this desire to become a public prosecutor.

“I had this in me to run for DA, but I wanted to make money,” he tells the crowd with a laugh. “But the voice inside me just got louder and louder.”

He finally followed the voice to the ballot box, which handed him an impressive win, with 55 percent of Democratic voters choosing him, to Hynes’s 44 percent in the primary.

“Let me just say this: it is a desperate act of Joe Hynes to falsely accuse me of these things,” Thompson told Hamodia in a brief interview after the Flatbush event. “As I said before, Clarence Norman did not run my campaign.”

Hynes recused himself from prosecuting Lopez, a longtime personal friend, and denies receiving any email from Wachtler referring to Thompson by a racial epithet. He, in turn, portrays Thompson as unprepared to take over the office, the largest in the nation.

Hynes released an internal poll last week, which shows him beating Thompson if respondents were not told of party affiliation. However, when informed that Hynes was running on the Republican line, more than half of the interviewees told the pollster that they would vote for Thompson.

Turning toward the politics of the campaign, Thompson denied some of Hynes’s strongest charges against him, and defended himself from Hynes’s accusation that he had never been promoted to a supervisory position.

“I’m eminently qualified to serve as Brooklyn DA,” he declared, his voice brooking no ambiguity. “I have vast experience in both the public sector and in the private practice. I’m someone who has created a law firm from scratch, someone who has handled some of the toughest cases, not only in the city but in the country, someone who worked in President Clinton’s justice department.”

Several minutes before, Thompson expressed a different message about his rival, praising some of his programs in front of a room of people who were staunch supporters of Hynes during the primary.

“Joe Hynes has done some good work in his 24 years, I’d be lying if I didn’t say so,” Thompson said. “But I want to build upon that good work.”

Thompson said that if he wins the Nov. 5 election, his priorities will be to tackle gun violence, keep reins on police and prevent wrongful convictions by putting an emphasis on getting all exculpatory evidence handed over to the defense before the trial.

But he admitted that he was still getting to know what issues Orthodox Jews care about, and wants to keep the conversation going in the future.

“When I say I want to represent the diversity of Brooklyn, I mean this community as well,” he says.

He suggested that as a community service, his DA office would host seminars on educating the Orthodox community on methods to avoid white-collar crime. But as far as crime goes, he said that the biggest need in Orthodox neighborhoods is to tackle car thefts and home break-ins.

“I think property crimes have to be addressed in a real aggressive way,” he says. “We can’t have folks in Brooklyn breaking into cars, breaking into houses, getting arrested and then just getting out on the street in a couple of days. We can’t have this revolving-door justice.”

While the stop-question-and-frisk tactic is inherently a police matter, Thompson vowed to crack down on what he termed “police abuse” of the tactic police say was successful at reducing crime to record low levels.

One question asked by an attendee was how can a DA prevent a wrongful arrest from disintegrating into the breakdown of the family. Thompson responded that his goal as prosecutor is “not to get a conviction but to make sure justice is done.”

“One case cannot represent a community,” he says, adding that in his private practice he sometimes has an opposing attorney who tries to backhandedly strike black jurors from the pool. “I think they figure that they’re black and I’m black and they’re going to listen to whatever I say.”

Thompson says that he will remain committed to the Orthodox community, even though voter rolls show they have overwhelmingly supported Hynes in the primary and are set to do so in the general election.

Asked if he was committed to having a special liaison to the Orthodox community, similar to Hynes’s Henna White, Thompson responded that he has not yet made the decision to have one, but “is committed to making sure that we have a strong relationship with the Orthodox Jewish community.”

This article appeared in print on page 19 of the October 30th, 2013 edition of Hamodia.