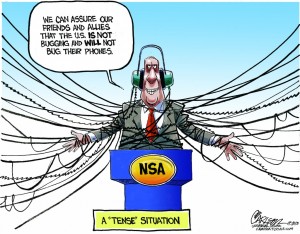 The steady leak of information about the NSA spying programs has been ongoing for about six months now. The most recent development was the disclosure of a memo revealing that the NSA encourages senior officials in the White House and departments such as State and Defense to share their “Rolodexes” so the agency can add the phone numbers of leading foreign politicians to the phone numbers currently being tracked. By one account, this included 35 foreign leaders, including German Chancellor Angela Merkel.

Merkel attacked the United States for this practice, and acted as if this is an unheard-of custom and she was offended by the very thought of it. “We need to have trust in our allies and partners, and this must now be established once again. I repeat that spying among friends is not at all acceptable against anyone and that goes for every citizen in Germany.”

But one thing must be clear. Although press secretary Jay Carney insists otherwise, the American government has spied on foreign countries and always will. There is no dispensation for allies; if it is in the national interest to spy on an ally, it will be done. Most countries have operated under this assumption for years; former Mossad head Danny Yatom told Maariv that the U.S. also listens in on Israel. For Merkel to act as if this is news to her is only a political ploy, one meant to embarrass the president and raise her own standing on the international stage.

And why shouldn’t the government do it? As Council on Foreign Relations Senior Fellow in National Security Studies Max Boot pointed out in Commentary, the only reason these countries take issue with the idea of spying on allies is because they “just don’t have the resources or capability to spy as effectively as the NSA does. But if [they] did, [they] would [do it too].” As the 19th-century British Prime Minister, Lord Palmerston, said, “We have no eternal allies and we have no perpetual enemies. Our interests are eternal and perpetual and those interests it is our duty to follow.”

As Boot correctly points out, there are reasons to spy on allies that are more vital than would be for non-allies. For example, although Germany is considered a close ally of the United States, there are many times when their interests are not necessarily aligned with ours. In those cases, they will almost surely do what is in their own best interest, as well they should.

A few notable examples of issues involving a divergence of interests would include the Iraq war (where Germany did not back the U.S.) and the war to overthrow Gadhafi in Libya (Germany did not partake in that, either). The very fact that the common interests of the United States and Germany don’t seem to align as perfectly as American interests do with other countries such as Great Britain or Australia might just make it easy to understand why those countries are conspicuously absent from the list of countries we spy on. Those countries, along with Canada and New Zealand, are true allies. The need to spy on each other is close to nonexistent, as they share the STONEGHOST network, essentially allowing each other to see all their secrets. If the Germans (or the French, for that matter) would really believe they were close enough allies to preclude spying on each other, they wouldn’t feel the need to keep secrets from the United States, either.

The international spying scandal, which spans both the worlds of intelligence and international politics, isn’t so much of an outrage in and of itself, as the spying itself is very understandable. What is an outrage, when you consider that the very same reports that exposed this also date the start of this practice to the first term of George W. Bush, is that President Obama has found himself to be in blatant violation of the so-called “Eleventh Commandment.” This rule, which is doubly applicable here — seeing as it’s been invoked both in the realm of politics and the world of intelligence — is “Never get caught.” That is the true scandal, the one that has led to the new reality, in which, as former Vice President Cheney said on Sunday, “…our friends no longer count on us, no longer trust us, and our adversaries don’t fear us.”

This article appeared in print on page 46 of the October 30th, 2013 edition of Hamodia.