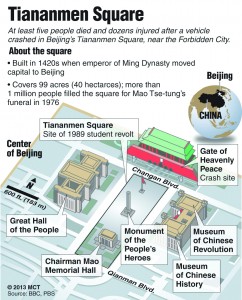 It could hardly have been a more audacious attack or one that was aimed more directly at the bull’s-eye that is the spiritual heart of China.

At 12:05 p.m. Monday, a white sport utility vehicle entered a sidewalk and drove nearly 500 yards, plowing through tourists and police, until it stopped near the iconic portrait of Mao Tse-tung that hangs over the main gate in front of Tiananmen Square.

The Chinese state news reported that five people were killed and 38 injured. The dead included the three occupants of the car and two tourists, one a Filipino woman and the other a Chinese man.

There were some suggestions that police were looking at suspects from the Uighur community, Muslims from the northwest of China.

A purported police notice put out Monday, apparently after the incident, advised Beijing hotel owners to look out for a 25-year-old and a 42-year-old man from the towns of Pichan and Lukchun, who have been involved in deadly tit-for-tat violence since the summer.

Few other details were forthcoming from the official Chinese news organs and photographs were scrubbed clean from the internet.

The Xinhua news service said only that the causes of the incident were “under investigation.” The circumstances, however, suggested that it was a deliberate attack at one of the most closely guarded locations in China.

At all times, Tiananmen Square is blanketed with paramilitary and police, uniformed and plain-clothed, mingling in the crowds. Cameras record every motion. Separating the street from the sidewalk are 5-foot-high white steel barricades — designed to prevent the type of attack that took place Monday.

However, the white sport utility vehicle appears to have entered at one of the few openings in the barricades, some 500 yards to the east of the square at the intersection of Nanchizi, a street running perpendicular to the main Chang’an Street.

This article appeared in print on page 2 of the October 29th, 2013 edition of Hamodia.