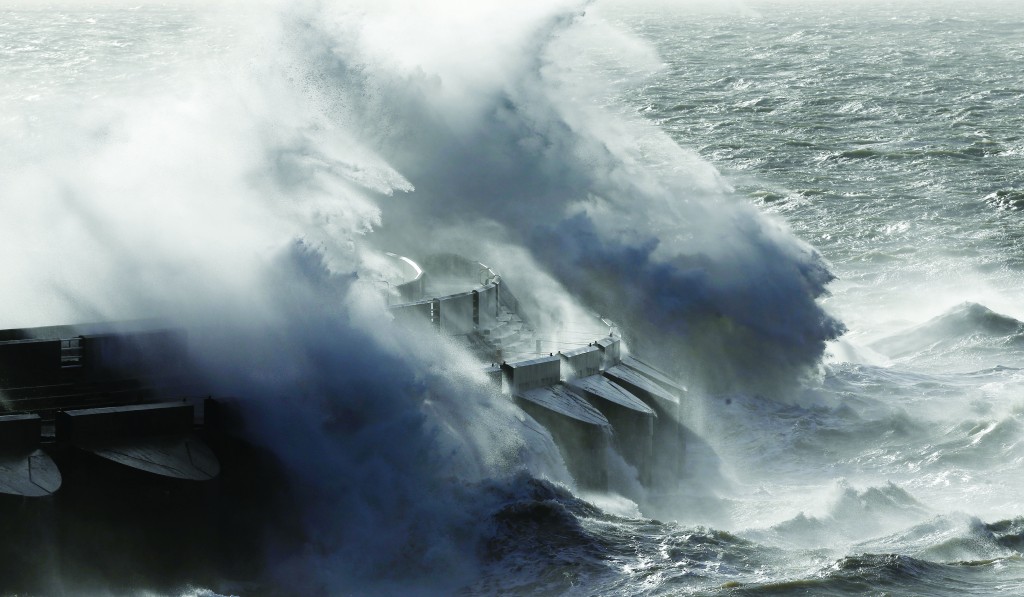 A savage coastal storm powered by hurricane-force gusts slashed its way through Britain and western Europe on Monday, felling trees, flooding lowlands and snarling traffic in the air, at sea and on land. At least 13 people were reported killed.

It was one of the worst storms to hit the region in years.

Gusts of 99 miles per hour were reported on the Isle of Wight in southern England, while gusts up to 80 mph hit the British mainland. Later in the day, the Danish capital of Copenhagen saw record gusts up of to 120 mph and an autobahn in central Germany was shut down by gusts up to 62 mph.

All across the region, people were warned to stay indoors. Hundreds of trees were uprooted or split, blocking roads and crushing cars. The Dutch were told to leave their beloved bicycles at home for safety’s sake.

At least thirteen storm-related deaths were reported, most victims crushed by falling trees. Germany had six deaths, Britain had five and the Netherlands and Denmark had one each. One woman was also missing after being swept into the surf in France.

Two people were killed in London by a gas explosion and a British teen who played in the storm-driven surf was swept out to sea. A man in Denmark was killed when a brick flew off and hit him in the head.

Despite the strength of its gusts, the storm was not considered a hurricane because it didn’t form over warm expanses of open ocean like the hurricanes that batter the Caribbean and the United States. Britain’s national weather service, the Met Office, said Britain does not get hurricanes because those are “warm latitude” storms that draw their energy from seas far warmer than the North Atlantic. Monday’s storm also did not have an “eye” at its center like most hurricanes.

Nearly 1,100 passengers had to ride out the storm on a heaving ferry from Newcastle in Britain to the Dutch port of Ijmuiden after strong winds and heavy seas blocked it from docking in the morning. The ship returned to the North Sea to wait for the wind to die down rather than risk being smashed against the harbor’s walls, Teun-Wim Leene of DFDS Seaways told national broadcaster NOS.

In central London, a huge building crane near the prime minister’s office crumpled in the gusts. The city’s overburdened transit system faced major delays and cancellations and did not recover even after the weather swept to the east.

A nuclear power station in Kent, southern England, automatically shut its two reactors after storm debris reduced its incoming power supply. Officials at the Dungeness B plant said the reactors had shut down safely and would be brought back once power was restored.

The storm left Britain in the early afternoon and roared across the English Channel, leaving up to 270,000 UK homes without power.

Trains were canceled in southern Sweden and Denmark. Winds blew off roofs, with debris reportedly breaking the legs of one man. Near the Danish capital of Copenhagen, the storm ripped down the scaffolding from a five-story apartment building.

In Germany, the death toll reached six, with four people killed in three separate accidents Monday involving trees falling on cars, the DPA news agency reported. A sailor near Cologne was killed Sunday when his boat capsized, and a fisherman drowned northeast of the city.

In addition to widespread rail disruptions, both Duesseldorf and Hamburg airports saw many flights canceled, stranding more than 1,000 passengers.

Thousands of homes in northwestern France also lost electricity, while in the Netherlands several rail lines shut down and airports faced delays. Amsterdam’s central railway station was closed due to storm damage.

Amsterdam was one of the hardest-hit cities as the storm surged up the Dutch coast. Powerful wind gusts toppled trees into canals in the capital’s historic center and sent branches tumbling onto rail and tram lines, halting almost all public transport. Commuters faced long struggles to get home.

London Mayor Boris Johnson praised emergency workers for doing an “amazing job” trying to keep London moving. He said his thoughts, along with those of all Londoners, were with the victims and their loved ones.