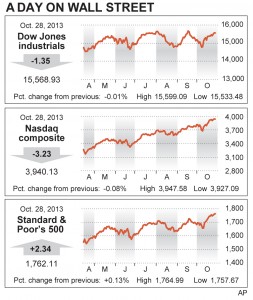 It was another record day for stocks, but barely.

J.C. Penney rose the most in the index after the retailer’s CEO said sales were improving. That helped stocks overcome poor earnings and a weak forecast from drugmaker Merck. Roper Industries, a medical and industrial equipment manufacturer, also lowered its earnings estimate for the year.

The S&P 500 has performed well in October, closing at an all-time high six times. A deal in Washington that ended a partial government shutdown and kept the U.S. government from defaulting on its debt has helped drive up the index. Companies also have managed to increase earnings, even with mediocre growth in the economy, helping lift the S&P 500.

Earnings in the third quarter are expected to rise by about 4.5 percent from a year ago at S&P 500 companies, according to data from S&P Capital IQ. While that is the slowest growth in a year, companies are still beating the estimates of Wall Street analysts. About two-thirds of the companies that have published earnings so far have exceeded expectations.

J.C. Penney, which is trying to recover from a botched corporate makeover led by its former CEO, rose 60 cents, or 8.8 percent, to $7.39. The stock is still down 63 percent this year.

Stocks have been supported this year by economic stimulus from the Federal Reserve. This week investors will get more insight into the Fed’s thinking.

Analysts don’t expect to see any big changes come out of a meeting of Fed policymakers this week. The central bank will release a statement on Wednesday afternoon after its meeting finishes.

The Fed is currently buying $85 billion in bonds every month to help keep long-term interest rates low and to encourage borrowing, spending and hiring.

“The Fed is not likely to surprise the markets at this week’s meeting, by any means,” said Michael Sheldon, the Chief Market Strategist at RDM Financial. “For now, it’s steady as she goes.”

The 16-day partial government shutdown that ended earlier this month likely curtailed economic growth in the fourth quarter. Also, many government agencies stopped publishing economic reports during the shutdown, making it harder for policymakers to get a clear picture of the economy.

— Bristol-Myers Squibb rose $3.25, or 6.7 percent, to $52.02 after the company reported positive results from an early-stage study of its cancer drug nivolumab.

— CF Industries gained $8.74, or 4.2 percent, to $218.36 after the company agreed to sell its phosphate business to the fertilizer producer Mosaic.

This article appeared in print on page 8 of the October 29th, 2013 edition of Hamodia.