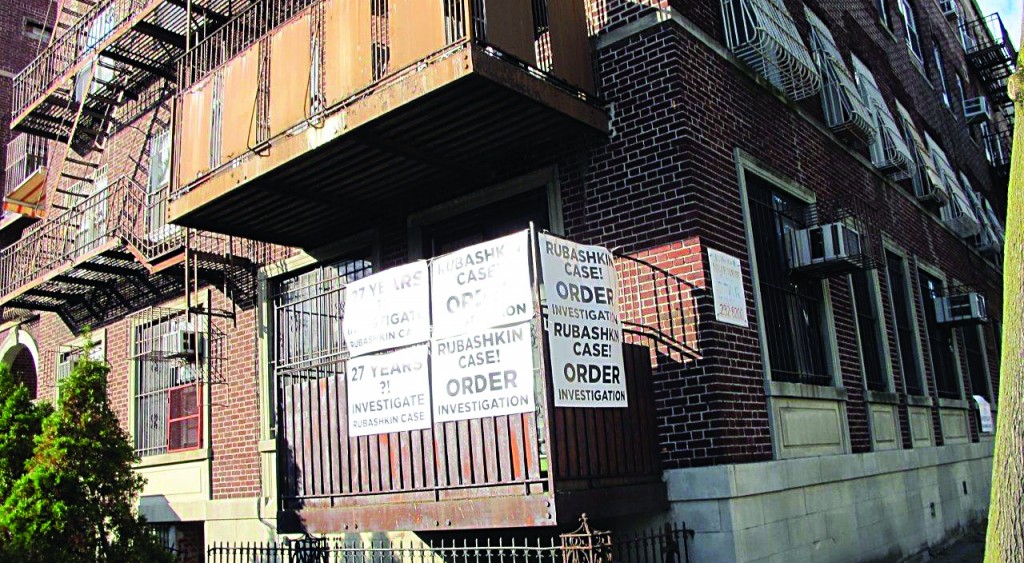 Harried Residents Use Opportunity to Plead for Rubashkin

With lights flashing and sirens blaring, the motorcade carrying President Barack Obama passed through through the heart of the Jewish neighborhood in Crown Heights on Friday, impacting Shabbos preparations along the usually bustling Kingston Avenue and giving residents the opportunity to bring attention to the plight of Sholom Rubashkin.

Obama was on his way to deliver a speech on education at nearby Pathways in Technology Early College High School (P-TECH).

After the White House announcement of Obama’s Crown Heights speech on Monday, Oct. 21, the NYPD warned Crown Heights community members that traffic would be heavy on Friday. Starting at 11 p.m. on Thursday night, parking was blocked and barricades were set up all along the president’s route, which took him from nearby Prospect Park down Flatbush Avenue, along Empire Boulevard, and up Kingston Avenue, causing a severe parking shortage.

On Friday morning Crown Heights stores had signs up advising residents to do their Shabbos shopping as early as possible to avoid problems.

“I think they did a good job with the logistics,” said Shmulik Raices, 26, as he stood on Kingston Avenue, Crown Heights’ main shopping thoroughfare, waiting to catch a glimpse of the motorcade. “It would have been optimal if they would have taken Friday and what a mess this would cause for us into account more, but still, they did a good job.”

Raices had never seen a presidential motorcade before and said he was looking forward. “Although I disagree with the president’s policies, I’m still excited to see him, or at least see his motorcade.”

Leaning against a barrier on Kingston Avenue just across from the Jewish Children’s Museum, Lt. James Woods of the NYPD’s Brooklyn South said that there was nothing out of the ordinary in the day’s preparations, and that along with choosing the most secure route for the president, the NYPD was trying to ensure minimal disruption.

“We wanted to bring the president along the route that we felt was best,” said Woods. “But we advised people to start early for Shabbos.”

Very noticeable along Kingston Avenue on Friday morning were large placards with black-on-white lettering calling attention to what residents say is the unjust and
biased prosecution of Sholom Rubashkin, who was sentenced to an unprecedented 27 years in federal prison, a sentence that was questioned by six former attorneys general, among others.

Marine One, carrying President Obama, touched down on a baseball field in Prospect Park at 2:57 p.m., where the president was met by U.S. Senator Charles Schumer. The two entered Obama’s limousine —  part of a massive motorcade that included NYPD motorcycles, counterterror officials, Secret Servicemen, communications equipment, and an ambulance — before proceeding at just past 3 p.m. toward P-TECH, located at Albany Avenue and Dean Street.

Traveling in the presidential motorcade, Time Magazine’s Zeke Miller wrote in the White House press pool report: “Large throngs of camera-phone-toting folks lined the streets, with cheers audible through the van windows. Through one neighborhood of Crown Heights, there was a large group of Hasidic Jews chanting and holding signs calling on the president to review the Sholom Rubashkin case.”

One sign-holder, Rabbi Eliezer Shemtov, said he felt it was important to stand in support of Rubashkin even if there was only a slim chance the signs would have any effect.

Cameras flashed as the motorcade quickly passed up the street, and parents hoisted their children higher in the air to give them a chance to witness the impressive sight. For Shemtov, however, the purpose of standing at the barricade was not just to observe but to respectfully deliver a point directly to the president.

“There is a piece of Sholom [Rubashkin] in each of us,” said Rabbi Shemtov. “The president should care about our message.”