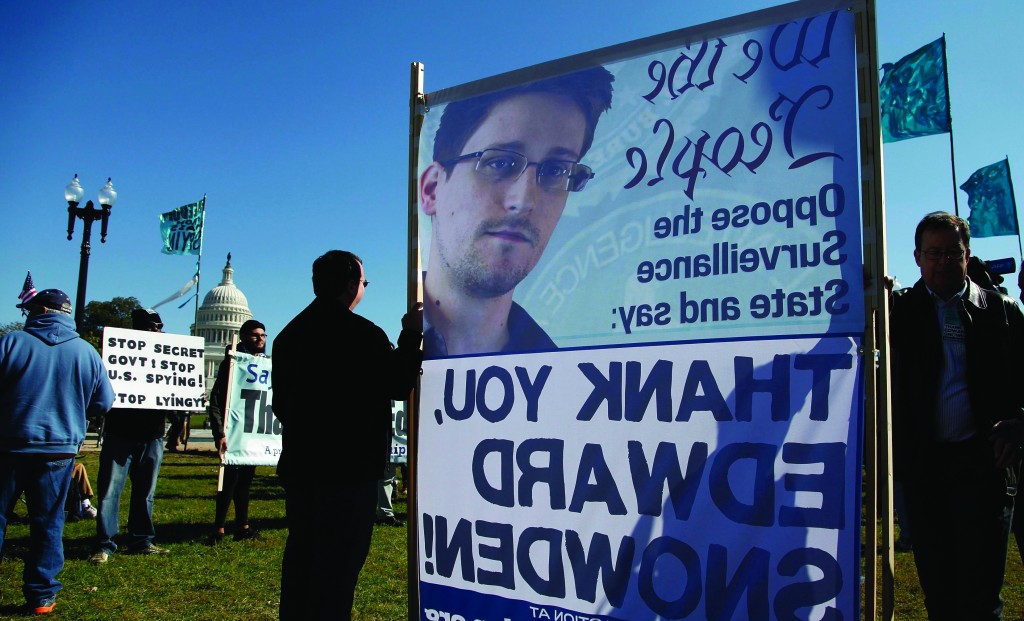 Secretary of State John Kerry went to Europe to talk about Mideast peace, Syria and Iran. What he got was an earful of outrage over U.S. snooping abroad.

President Barack Obama has defended America’s surveillance dragnet to leaders of Russia, Mexico, Brazil, France and Germany, but international anger over the disclosures shows no signs of abating in the short run.

Longer term, the revelations by former National Security Agency contractor Edward Snowden about NSA tactics that allegedly include tapping the cellphones of as many as 35 world leaders threaten to undermine U.S. foreign policy in a range of areas.

In Washington, demonstrators held up signs reading, “Thank you, Edward Snowden!” as they marched and rallied near the U.S. Capitol to demand that Congress investigate the NSA’s mass surveillance programs.

This vacuum-cleaner approach to data collection has rattled allies.

“The magnitude of the eavesdropping is what shocked us,” former French foreign minister Bernard Kouchner said in a radio interview. “Let’s be honest — we eavesdrop too. Everyone is listening to everyone else. But we don’t have the same means as the United States, which makes us jealous.”

So where in the world isn’t the NSA? That’s one big question raised by the disclosures. Whether the tapping of allies is a step too far might be moot.

The British ambassador to Lebanon, Tom Fletcher, posted online this past week, “I work on assumption that 6+ countries tap my phone. Increasingly rare that diplomats say anything sensitive on calls.”

Diplomatic relations are built on trust. If America’s credibility is in question, the U.S. will find it harder to maintain alliances, influence world opinion and maybe even close trade deals.

Spying among allies is not new.

Madeleine Albright, secretary of state during the Clinton administration, recalled being at the United Nations and having the French ambassador ask her why she said something in a private conversation apparently intercepted by the French.

The French government protested revelations this past week that the NSA had collected 70.3 million French-based telephone and electronic message records in a 30-day period.

“A lot of the things that have come out I think are specifically damaging because they are negotiating positions and a variety of ways that we have to go about business,” Albright said at a conference hosted by the Center for American Progress in Washington.

“I think it has made life very difficult for Secretary Kerry. … There has to be a set of private talks that, in fact, precede negotiations and I think it makes it very, very hard.”

The spy flap could give the Europeans leverage in talks with the U.S. on a free-trade agreement, which would merge nearly half of the global economy.

“If we go to the negotiations and we have the feeling those people with whom we negotiate know everything that we want to deal with in advance, how can we trust each other?” asked Martin Schulz, president of the European Parliament.

The revelations could undercut Washington’s effort to fight terrorism, says Kiron Skinner, director of the Center for International Relations and Politics at Carnegie Mellon University. The broad nature of NSA surveillance goes against the Obama administration’s claim that much of U.S. espionage is carried out to combat terrorism, she said.

The administration asserts that the U.S. is amassing intelligence of the type gathered by all nations and that it’s necessary to protect the U.S. and its allies against security threats.

Kerry discussed the NSA affair in Europe with French and Italian officials this past week.

Most governments have not retaliated, but some countries are pushing back. Germany and France are demanding that the administration agree by year’s end to new rules that could mean an end to reported American eavesdropping on foreign leaders, companies and innocent citizens.

Brazilian President Dilma Rousseff canceled her official state visit to the White House. She ordered measures aimed at greater Brazilian online independence and security after learning that the NSA intercepted her communications, hacked into the state-owned Petrobras oil company’s network and spied on Brazilians.

Brazil says it is working with other countries to draft a U.N. General Assembly resolution that would guarantee people’s privacy in electronic communications.

A European Parliament committee approved rules that would strengthen online privacy and outlaw the kind of data transfers the U.S. is using for its spying program.

“We need trust among allies and partners,” said German Chancellor Angela Merkel, whose cellphone was allegedly tapped by the NSA. “Such trust now has to be built anew.”