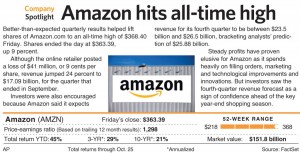 Amazon.com’s revenue rose more than Wall Street expected in its fiscal third quarter, but the online retailer posted another loss due to ongoing investments in its business.

Steady profits have proven elusive for the world’s largest online retailer as it spends heavily on filling orders, marketing and technological improvements and innovations. But investors were cheered by its revenue forecast for the fourth quarter, a sign of confidence and optimism as it enters the key year-end shopping season. Shares rose 8 percent in after-hours trading.

Amazon has been busy launching new products, expanding the number of fulfillment centers and adding robots to its line to help get packages out the door. Operating expenses rose 24 percent during the quarter.