Higher Profits From Ford, Others Drive Stocks Up 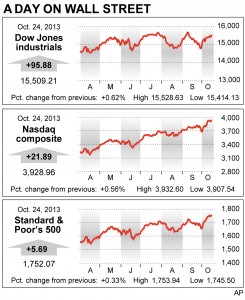 Another dose of strong corporate earnings, this time from Ford, Southwest Airlines and others, helped push the stock market higher on Thursday.

It’s one of the busiest weeks on Wall Street for corporate earnings. Roughly a third of the S&P 500 will report results, including some of the world’s best-known companies.

For investors, this week has also been a welcome return to business as usual. Wall Street has been focused for weeks on Washington, with the government shutdown, the near-breach of the nation’s borrowing limit and questions about what’s next for the Federal Reserve’s massive bond-buying program.

So far, corporate earnings have come in pretty much as most money managers expected. Companies are reporting bigger profits, but most of the growth has come from cost-cutting, a trend that hasn’t changed very much since the financial crisis.

“We’re in a slow-growth economy and companies need to do everything to boost earnings,” said Brian Reynolds, chief market strategist at Rosenblatt Securities. 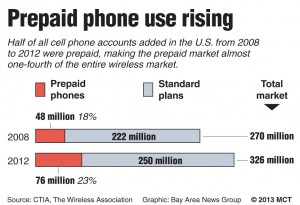 Among companies reporting earnings, Ford earned an adjusted profit of 45 cents per share — a record for the third quarter — as sales rose 12 percent to $36 billion. The Dearborn, Mich.-based automaker sold 1.5 million cars and trucks in the period, up 16 percent. Wall Street analysts had expected Ford to earn 37 cents per share, according to FactSet. Ford rose 24 cents, or 1.5 percent, to $17.76.

Southwest Airlines, the nation’s largest domestic air carrier, reported sharply higher earnings. Southwest said it had an adjusted profit of 34 cents per share, up from 13 cents a year ago. Southwest rose 61 cents, or 4 percent, to $17.02.

AT&T fell 65 cents, or 1.8 percent, to $34.63. The telecommunications company said late Wednesday it had an adjusted profit of 66 cents in the third quarter, a penny above analysts’ forecasts; however, revenue fell slightly short of what analysts expected.

Wall Street also had some positive news out of China. A Chinese manufacturing index rose to a seven-month high in October, suggesting continued momentum for the rebound in the world’s second-biggest economy.

With the S&P 500 trading near a record high and corporations finding it difficult to increase their sales, several market watchers have said they aren’t sure how much further stocks can go from here.

There are signs that stocks are getting expensive. Investors are currently paying more than $16 for every $1 of earnings in the S&P 500, up from $14 at the beginning of the year.

“We’re at this stage where we need to start to see the fundamentals improve,” said Quincy Krosby, a market strategist with Prudential Financial.

In other corporate news:

This article appeared in print on page 8 of the October 25th, 2013 edition of Hamodia.