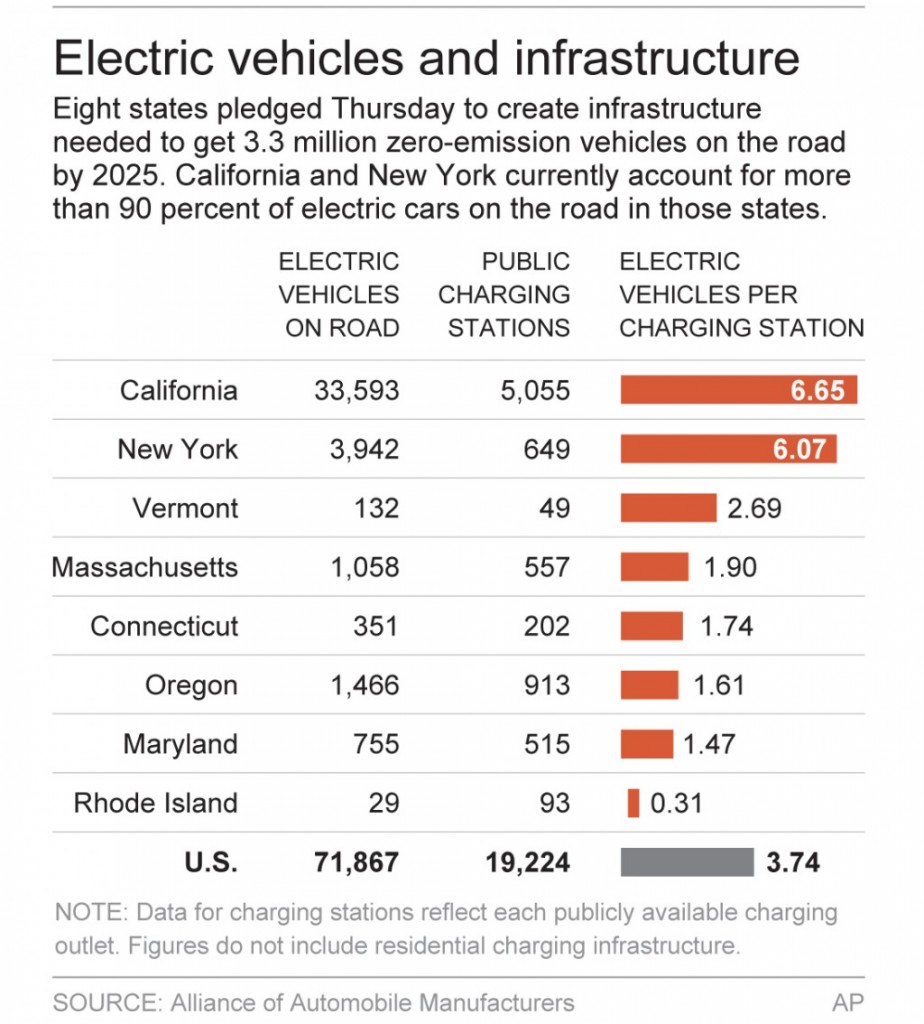 Eight states, including California and New York, pledged Thursday to work together to dramatically multiply the number of zero-emission cars on the nation's roads by speeding the construction of charging stations and other infrastructure.

The goal is to put 3.3 million battery-powered cars, plug-in hybrids and other clean-burning vehicles on the roads in those states by 2025. That's more than 15 times as many zero-emission vehicles projected to be in use in the entire U.S. by 2015.

Auto dealers say networks of charging stations and other conveniences are crucial to winning over drivers who are accustomed to pulling up to the gas pump and fear getting stranded by a dead battery.

The other states in the pact are Massachusetts, Maryland, Oregon, Connecticut, Rhode Island and Vermont. The eight states together represent about 23 percent of the U.S. auto market.

The Associated Press breaks down why there are not more zero-emission cars already, the keys to accomplishing the goal and the formidable challenges:

How does this agreement differ from plans already in place in the states?

Each state has already separately adopted rules to require a percentage of new vehicles sold to be zero-emission by 2025.

For example, California's mandate of 15.4 percent calls for a total of 1.5 million zero-emission vehicles to be on the state's roads by that time. Currently, plug-in hybrids and electric vehicles make up less than 2 percent of the state's market.

The agreement signed Thursday is aimed at coordinating efforts among the eight states so that incentives, zoning laws and other ideas for promoting zero-emission vehicles can be more quickly implemented.

“The idea is to make it easier for customers to operate and use zero-emission vehicles. This, in turn, will help pave the way for success of the auto industry,” said Mary Nichols, chairman of the California Air Resources Board.

Are the states contributing money to make this happen?

The agreement signed Thursday requires no specific financial commitment from each state. But each has already launched incentive programs and other policies meant to increase sales of zero-emission vehicles.

For example, California offers up to $2,500 in buyer rebates. The state leads the nation in zero-emission-vehicle sales, with more than 33,000 sold through June 30, and has set aside an additional $59.55 million for some 29,000 rebates through mid-2014. The state has also dedicated $20 million annually through 2024 or until 100 hydrogen stations are built, whichever comes first.

Massachusetts pays incentives of up to $7,500 per vehicle to cities that buy electric models, and up to $15,000 for each charging station built. New York has set its own goal of adding a network of up to 3,000 charging stations over the next five years.

How many zero-emission vehicles are on the road now, and how many models are available?

Industry data projects more than 200,000 zero-emission vehicles on the nation's roads by 2015. That's out of more than 250 million registered vehicles in the U.S.

There are 16 zero-emission models from eight manufacturers on the market — nine that run on batteries alone, two hydrogen fuel cell cars and five plug-in hybrid models, which can run on battery alone or gasoline.

The Alliance of Automobile Manufacturers in Washington says there will be 26 battery electric vehicles and plug-in hybrids for sale in 2014.

Officials say every automaker will have a zero-emission model by 2015.

What are the key things needed to reach this goal?

Auto manufacturers and dealers say consumers do not yet fully trust electric vehicles because of the lack of charging stations. Also, the clean-burning vehicles tend to be more expensive than gasoline-powered cars.

Automakers applauded Thursday's agreement as an important step forward, but cautioned that significant infrastructure investment will be needed to reach the goal.

Putting 3.3 million vehicles on the road “is not an achievable goal given what we're doing today from an infrastructure-investment standpoint. It's just not,” said Dan Gage, a spokesman for the Alliance of Automobile Manufacturers in Washington, which represents Toyota, General Motors and 10 others.

“Up to this point, there's been a lack of consumer interest, and a lot of that has to do with investment in infrastructure.”

There are more than 6,700 charging stations open to the public in the eight states in this agreement, which seeks to multiply that number exponentially over the next dozen years.

“We think that is going to be necessary for some of the (driving) range anxiety and other acceptance barriers that need to be broken down,” said Brian Maas, president of the California New Car Dealers Association.

“The cars are coming — they're here already — but if you don't have a place to charge them, there's not going to be the level of consumer acceptance.”