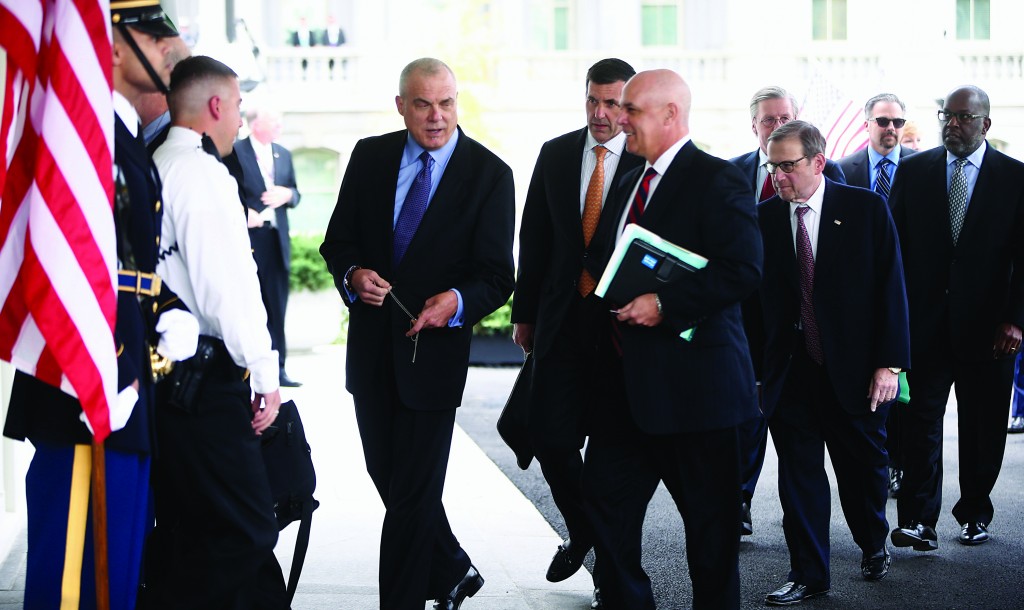 The White House sought to limit the political damage from the troubled rollout of the government’s healthcare website on Wednesday as Republicans increased the pressure to delay parts of President Barack Obama’s signature domestic policy.

Obama administration officials held a closed-door briefing for Democrats in the House of Representatives and a private session with insurance company executives to discuss efforts to fix the Healthcare.gov website.

Republican critics in Congress demanded a delay in a requirement of the healthcare law that uninsured Americans must purchase insurance or face a tax penalty and said they would intensify their investigations into the launch of the 2010 Affordable Care Act, known as “Obamacare.” “It is our job to hold them accountable, and when it comes to Obamacare clearly there is a lot to hold accountable,” House of Representatives Speaker John Boehner told reporters on Wednesday.

The administration is trying to preserve Democratic Party unity on the issue, which showed signs of fraying. The head of the Democratic National Committee, Representative Debbie Wasserman Schultz of Florida, told MSNBC the administration should be willing to extend the open-enrollment period for people to sign up for insurance. It ends on March 31.

Representative James Clyburn of South Carolina, the third-ranking House Democrat, criticized the website for forcing consumers to provide private information before deciding what kind of health insurance plan they want to buy.

“I’ve talked to too many people who tell me before they ever get around to figuring out what it is they want to buy, they’re having to answer questions that they don’t feel they should be answering,” Clyburn said.

Max Baucus, the Democratic chairman of the Senate Finance Committee, said in a statement that he hopes to meet with other committee members in the coming weeks, but said he would wait until after the website is repaired.

Republicans are not waiting. The House Energy and Commerce Committee on Thursday will hear from the top contractors responsible for the program, including website developer CGI Federal.

‘Working Hard to Fix the Problems’

Online exchanges, or marketplaces, were designed to be the main way for millions of uninsured Americans to research and buy health insurance plans under the law, but the October 1 debut has been marred by technical glitches that have kept many from signing on and making purchases. Those unable to sign up online can call a toll-free telephone number as an alternative.

The administration has so far declined to disclose the number of enrollments, either online or by telephone.

A prolonged delay in getting Healthcare.gov to work could jeopardize White House efforts to sign up as many as 7 million people in 2014, the first full year the law takes effect. The administration this week began what it called a “tech surge,” bringing in experts led by the administration’s top economic aide Jeffrey Zients to analyze and fix the problems.

“I think what we learned is they’re working hard to fix the problems,” Representative Sander Levin of Michigan, senior Democrat on the House Ways and Means Committee, said after Wednesday’s briefing.

The Health and Human Services Department will begin regular news briefings on Thursday to provide updates on “the progress that’s being made and on the efforts that are being undertaken, both to address the technical problems and to make the whole experience for American consumers better,” White House spokesman Jay Carney said.

House Democrats said there was no discussion in the briefing about whether the problems should lead to a delay of the individual requirement that every American have insurance or pay a tax penalty. The Congressional Budget Office has estimated a delay would reduce enrollment significantly.

Republicans, who have fought the healthcare law as an unwarranted extension of the federal government, said the requirement should be delayed until the problems with the rollout are resolved.

“With so many unanswered questions and the problems arising around this rollout, it doesn’t make any sense to impose this one percent mandate tax on the American people,” House Republican Leader Eric Cantor told reporters on Wednesday.

Republicans have repeatedly tried to derail or delay the healthcare law since taking control of the House in the 2010 elections. They demanded more answers on Wednesday about the scope of the problems.

Three committees in the Republican-controlled House have announced investigations of the law’s rollout, which Cantor described as “nothing short of a debacle.”

HHS Secretary Kathleen Sebelius has been the focal point of criticism and Republicans have demanded she step down, but so far the White House has rallied around her.

Denis McDonough, the White House chief of staff, told The New York Times on Tuesday that Sebelius “has the president’s confidence. And she knows that.”

In the same article, an unidentified White House aide also appeared to try to distance Sebelius from the website troubles, and was quoted as saying, “Kathleen has the title, but she doesn’t have the responsibility or in many respects the kind of wide authority and access to the president that she really needs to make a difference.”

Sebelius, who will testify to Congress next week, and McDonough attended the session with insurance company executives. They included the chief executives of WellPoint Inc, Humana Inc. and Aetna Inc., among others.

WellPoint raised its 2013 membership and profit forecasts in part to reflect coming market changes under the law, its chief executive, Joseph Swedish, said in a statement on Wednesday.