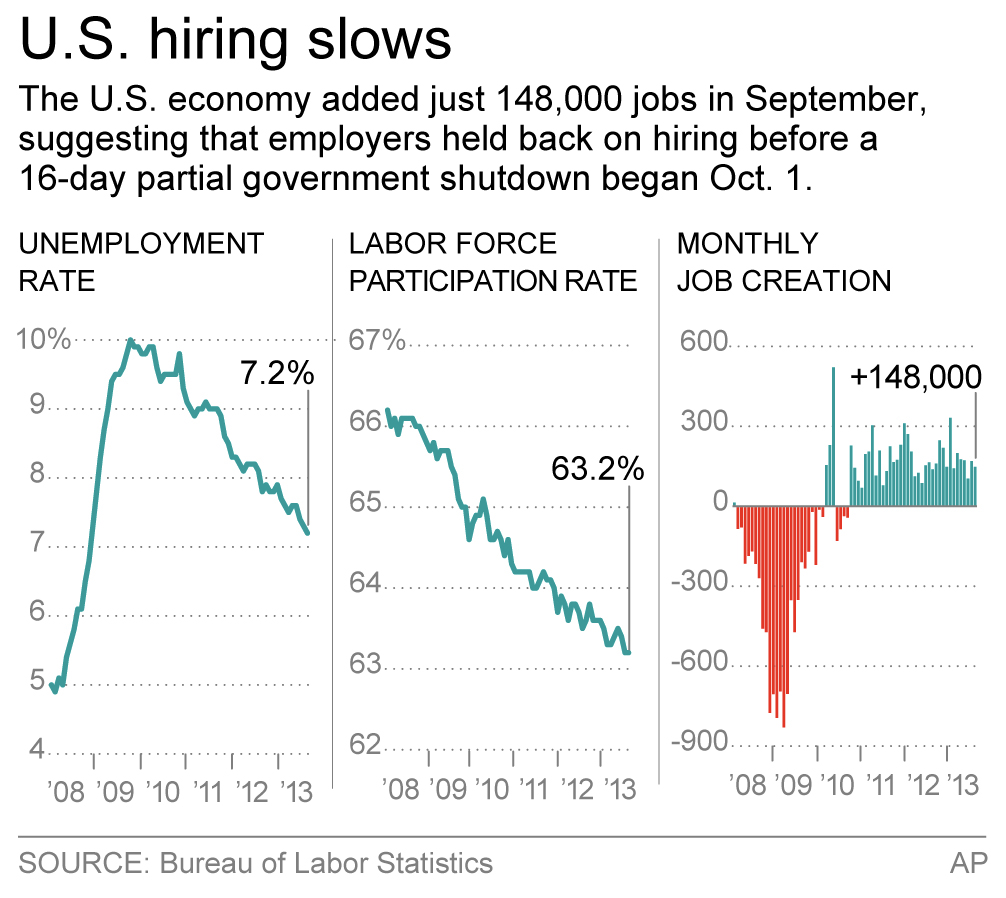 A dim view of the U.S. job market emerged Tuesday with a report that employers cut back on hiring in September just before a partial government shutdown began.

Just 148,000 jobs were added last month, a steep drop from August’s gain, though they were enough to lower unemployment to 7.2 percent from 7.3 percent in August. The report bolsters expectations that the Federal Reserve will maintain its pace of bond purchases for the rest of 2013 to try to keep long-term loan rates low.

The government’s release of the September jobs report had been delayed 2½ weeks by the shutdown. Temporary layoffs during the 16-day shutdown will probably depress October’s job gain. That means a clear picture of the job market won’t emerge before November jobs figures are issued in December.

“The economy is too fragile for the Federal Reserve to touch,” Sung Won Sohn, an economist at California State University, said. “The shenanigans in Congress have hurt confidence and increased uncertainties, most likely hurting both consumer and business spending as well as hiring.”

Average U.S. job growth has fallen sharply in the past three months after a promising start this year. The economy added an average of 143,000 jobs a month from July through September. That was down from the 182,000 average gain from April through June, and well below the 207,000-a-month pace from January through March.

The report “reinforces the impression that the labor market was losing a little momentum heading into the shutdown,” said Josh Feinman, global chief economist at Deutsche Asset and Wealth Management. “The labor market is continuing to create jobs. …It’s just frustratingly slow.”

Stocks rose after the report was released, in part because slower job gains means the Fed will continue its stimulus efforts. The Dow Jones Industrial Average was up about 50 points in midday trading.

Economists at Barclays now predict the Fed won’t trim its bond purchases until March, much later than its previous forecast of December.

The government doesn’t count people as unemployed unless they are actively looking for work. Most of the drop in the unemployment rate this year has occurred because many people have either given up looking or have postponed their job searches by remaining in school.

The September jobs report showed that some higher-paying industries added jobs at a healthy pace. Construction companies, for example, added 20,000.

The budget impasse didn’t stop Accumold, which makes components for medical devices, smartphones and other electronic goods, from boosting its workforce. CEO Roger Hargens said the Ankeny, Iowa-based company filled jobs in September and plans to add up to 65 to its 185-worker staff in the next few months.

Hargens said he is seeing more orders from customers who are shifting from Chinese manufacturers to U.S. suppliers.

“There’s a big trend to move manufacturing back to the United States,” he said. “It’s really speeding up now for us.”

The government revised its estimates of job growth in July and August to show a slight net gain of 9,000. It said employers added 193,000 jobs in August, more than the 169,000 previously estimated. But it said just 89,000 were added in July, the fewest in more than a year and below the earlier estimated 104,000.

The deceleration in job growth was a key reason the Fed decided in September to hold off on slowing its $85-billion-a-month in bond purchases. Many economists think the lack of clean data will lead the Fed to put off any decision on the bond purchases until 2014.

Robert Mellman, senior U.S. economist at JPMorgan Chase, forecasts that October’s job gains will be lower by about 35,000 because of cutbacks at government contractors and other companies affected by the shutdown. Many of those jobs will be regained in November.

Growth is expected to rise slightly in the first three months of next year, as consumers and businesses make purchases and investments that were delayed during the shutdown.