For Jobless Over 50, a Challenging Search for Work 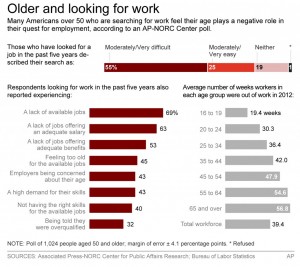 When Charlie Worboys lost his job, he feared searching for a new one at his age might be tough. Six years later, at 65, he’s still looking.

Luanne Lynch, 57, was laid off three times in the past decade, and previous layoffs brought jobs with a lower salary; this time she can’t even get that.

They’re not alone. A new Associated Press-NORC Center for Public Affairs Research poll finds many people over 50 reporting great difficulty finding work and feeling that their age is a factor.

After Worboys was laid off, and his hunt for another teaching job proved fruitless, he sought counseling positions. When those leads dried up, he applied for jobs in juvenile detention centers, in sales and elsewhere. He finally settled for part-time work, while still scouring online listings and sending out applications each week.

“They’re looking for the younger person,” he said. “They look at the number 65 and they don’t bother to look behind it.”

The AP-NORC Center poll found 55 percent of those 50 and older who have sought a job in the past five years characterized their search as difficult, and 43 percent thought employers were concerned about their age. Further, most in the poll reported finding few available jobs (69 percent), few that paid well (63 percent) or that offered adequate benefits (53 percent). About a third were told they were overqualified.

People of all ages have been frustrated by the job market, and the unemployment rate for those 55 and older was 5.3 percent in September, lower than the 7.2 percent rate among all ages. By comparison, unemployment among those 20-24 was 12.9 percent, and among those 25-54, 6.2 percent.

But long-term unemployment has been rampant among the oldest job seekers. Unemployed people aged 45 to 54 were out of work 45 weeks on average; those 55 to 64 were jobless for 57 weeks, and those 65 and older averaged 51 weeks.

Younger workers were unemployed for shorter periods of time.

Sixty-three percent of those who searched for a job cited financial need and 19 percent said it was because they were laid off. Far smaller numbers searched because they wanted to change careers, find a better salary or benefits, escape unhappiness at a prior job or simply get out of the house.

Lynch, of San Gabriel, Calif., hated taking a step down after the earlier layoffs, but this time only one interview has come from 70-some applications.

Bob Gershberg, a corporate recruiter in St. Petersburg, Fla., said unemployed people, regardless of age, have had trouble getting rehired. But he said older workers have faced an added layer of skepticism from employers.

“They’ll say, ‘Give me the young guy. Give me the up-and-comer. Someone with fire in the belly,” he said. “But there’s always been a bias against the unemployed. They say, ‘If she was so good, why’d she get cut?'”

Sharon Hulce, who runs a recruitment firm in Appleton, Wis., said she’s found some employers are concerned that applicants in their late 50s or 60s may not stick around for the long haul.

And Kerry Hannon, who authored “Great Jobs for Everyone 50-plus,” said managers may be leery of a lengthy resume from someone they can’t afford, salary-wise.

“They’ll look at your background and just figure you’ll be insulted, when they can get a younger worker to step in,” she said.

About four in ten who have been on the job market said they felt they lacked the right skills, or felt too old for the available jobs. Many reported trying to improve their skillset (20 percent) or present themselves with a fresher resume or interview approach (15 percent) to make themselves more marketable.

Bret Lane, 53, of San Diego, was out of work for 22 months until finding a job over the summer through Platform to Employment, a training program. He lost count of how many jobs he had applied for — the number was easily in the hundreds. Once, after seeing applications would be taken for a janitorial job paying $14 hourly, he got up at three a.m. to get an early start. There were already 400 others in line.

One in five respondents in the AP-NORC Center poll said they personally experienced prejudice or discrimination in the job market or at work, because of their age. That doubles to 40 percent among those who have sought a job in the last five years.

Faye Smith, 69, of Dallas, Ga., said she needed to find work after losing much of her savings in the downturn, but felt the hesitation of employers when they saw the dates on her resume.

“You could tell when they found out the age,” she said. “There’s a change in the face and the demeanor of the person.”

The AP-NORC Center survey was conducted Aug. 8 through Sept. 10 by NORC at the University of Chicago, with funding from the Alfred P. Sloan Foundation. It involved landline and cellphone interviews in English and Spanish with 1,024 people aged 50 and older, nationwide. Results from the full survey have a margin of sampling error of plus or minus 4.1 percentage points.