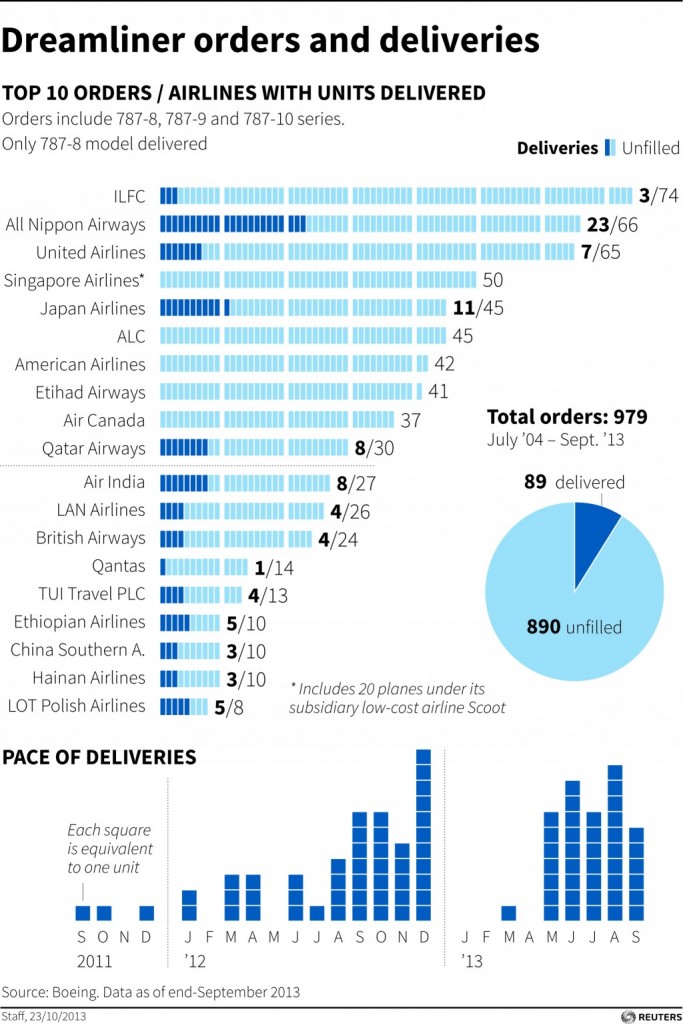 Boeing is riding a wave of demand for new fuel-efficient planes from airlines around the globe. Now the trick is to build them fast enough.

With a backlog of orders worth $344 billion, Boeing has been speeding up production of its big commercial planes. It now says it will boost output of the new 787 by 40 percent by the end of the decade.

On Wednesday, Boeing reported a better-than-expected third-quarter profit and raised its full-year outlook. Its shares hit an all-time high.

Along with automakers, aerospace companies like Boeing have been a source of manufacturing strength, offsetting the recent struggles of other big manufacturers like Caterpillar. On Wednesday, Caterpillar said a steep drop-off in its mining business reduced revenue by $11 billion, compared to last year. The maker of mining and construction equipment reduced its profit guidance for the second time in three months.

Automakers have been benefiting from low interest rates and pent-up demand from car buyers, who held on to cars for longer than usual during the Great Recession.

Boeing and European rival Airbus are benefiting from a big expansion of low-cost airlines in Asia and Latin America, and faster replacements of current planes, because new planes are fuel- efficient enough to justify their cost. Also, buying an airplane almost always involves a loan, so, like carmakers, aerospace companies have also been benefiting from lower interest rates.

Boeing is now making its long-haul 777, at a rate of more than eight per month, up from five in 2010. Airbus has boosted output of its competing A330 to 10 per month.

The long-range, fuel-efficient 787 has turned out to be very popular with airlines, and is benefiting from today’s economics. Jet fuel prices now are six times higher than in 1995, the last time Boeing delivered an all-new airplane model.

The speeding up of 787 production is especially noteworthy, because at one point it wasn’t clear whether Boeing would even meet its goal of delivering 60 of the planes in 2013. Battery had to cease deliveries when the planes were grounded for battery problems. Deliveries resumed in May and Boeing expects to meet its goal. Overall, Boeing expects to deliver 635 to 645 passenger airplanes this year.

Boeing has sold 131 787’s this year, and has a backlog of 890 of the planes, that have been ordered but not delivered.

Boeing is still working to fix the reliability of the 787. CEO Jim McNerney said on a conference call that its “dispatch reliability” — meaning the plane’s readiness for a flight — is at 97 percent, but needs to be better. “We’re not pleased yet,” he said.

He said software issues, including “false messaging,” represent one-third of the issue with the 787’s reliability. On Oct. 10, a 787 headed to Tokyo returned to San Diego, because of a possible problem with its deicing system. Japan Airlines officials said the pilot had received an error message about the system.

As for its financial results, faster airplane production is going straight to Boeing’s bottom line.

Not counting fluctuations in pension expenses, Boeing would have earned $1.80 per share. Analysts surveyed by FactSet had been expecting $1.55 per share.

Profits from commercial planes rose 40 percent, offsetting a 19 percent profit drop in Boeing’s defense division, where deliveries of military planes declined. Most defense contractors have been shrinking because of the decline or slower growth of military spending in the U.S. and Europe.