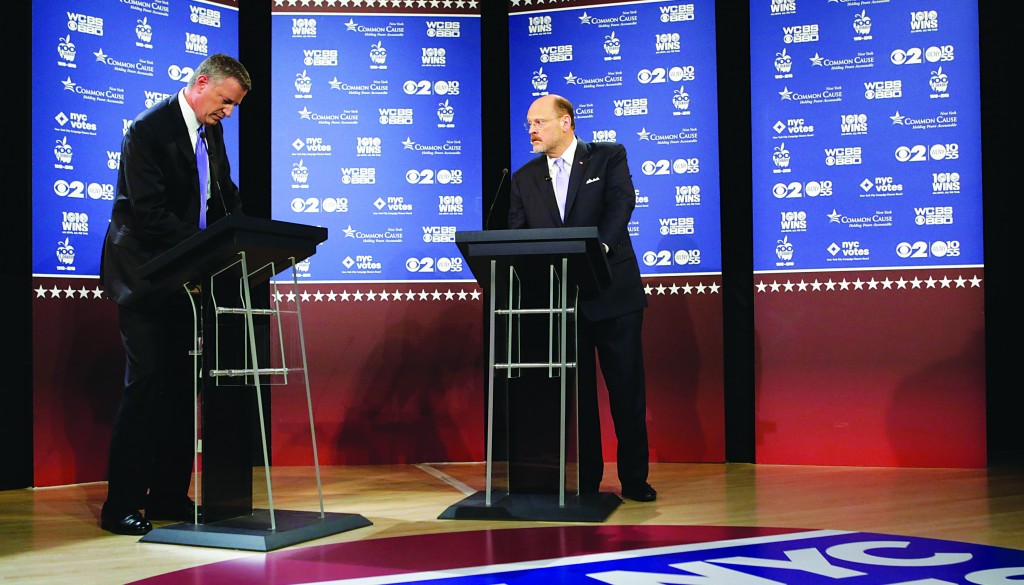 Hillary Clinton made her first post-secretary-of-state debut in the state that elected her to the Senate twice on Monday night, appearing at a frundraiser on behalf of Democrat Bill de Blasio’s front-running mayoral campaign.

Clinton more than paid back the favor to the man who ran her Senate campaign back in 2000, raising more than $1 million hours before the final deadline to participate in city matching grants expired.

“Hiring Bill de Blasio was one of the smartest decisions that I made,” Clinton said, according to a Daily News source. “I hope New Yorkers do the same.”

The party’s brightest star, whose own presidential ambitions are accompanied by runaway favorable ratings, came to the Roosevelt Hotel ballroom for de Blasio, who just earlier that afternoon was greeted with yet another poll showing he would beat Republican rival Joe Lhota by a nearly 45 percentage vote margin.

“It was an extraordinary experience, the crowd loved it. I may say it editorially; great energy in the room,” de Blasio told reporters standing outside the closed-media event.

“I was very, very gratified by her endorsement, I was very gratified by what she said about the time that we worked together. And I think particularly meaningful to me was she really rallied the crowd and really made clear to people how much we need to finish this campaign strong and how much it mattered,” de Blasio said.

Lhota held his own fundraiser Monday night. It was not in a ballroom, or even a hotel. It was in a Queens pizzeria. The minimum contribution was $25.

Lhota’s event, sponsored by Councilman Eric Ulrich, a Queens Republican, also featured an appearance by former Rep. Bob Turner, a Republican who scored his own upset victory two years ago.

Lhota said his “big event was last week, Thursday night, at the birthday party I had. We had like 300, 400 people. Everybody paid but my mother and father. That’s not true — they paid, too.”

None of the speakers worried about Lhota’s dim polling.

Turner compared the campaign to his own 2011 come-from-behind effort to win Anthony Weiner’s congressional seat against Democrat David Weprin.

“They were slow to start waking up to this,” he said. “You know, it’s been almost a full generation since New York City had bad governance. And people forget.”

Upset at Democrat  de Blasio’s rejection of the stop-question-and-frisk police tactic, and nervous at Republican Joe Lhota’s refusal to promise retroactive pay for union members, the largest umbrella group of police unions formed specifically to speak with one voice on the mayoral race said they are staying out.

“My understanding is we are not going to endorse in the mayoral race,” Roy Richter, president of the Captains Endowment Association, told Capital New York.

The majority of police unions promised earlier this year to campaign against any candidate who supports ending the tactic allowing police to stop a suspicious person, and search him after questioning. De Blasio said he will oppose the tactic while Lhota would pursue lawsuits to allow the NYPD to keep it.

“I think it’s a very difficult decision,” Richter said. “Lhota’s con [is] there’s always the concern about collective bargaining, but at the same time Lhota has been supportive and appreciative of the sacrifice that our members have made.”

Richter also said Lhota’s bleak poll numbers — he trails de Blasio 68 to 24 percent in a Quinnipiac poll released on Monday — make him a less attractive pick. He added that despite several attempts to meet de Blasio, the candidate has not been forthcoming.

In the Democratic primary, the coalition endorsed Bill Thompson, the only African-American in the race who embraced a more moderate stance on stop-question-and-frisk.

Facing a massive deficit in the polls, Joe Lhota plans to be on the attack in the second New York City mayoral debate Tuesday night, which doubles as one of his last chances to start a comeback that could topple front-runner Bill de Blasio.

Trailing by 44 points in a Quinnipiac University poll released Monday, the day before the second of three general election debates, Lhota is rapidly running out of time before voters go to the polls Nov. 5.

He plans to aggressively paint de Blasio as inexperienced, particularly when enforcing public safety. That had been his plan last week during the first debate, but Lhota was caught off guard by de Blasio, who eschewed the passive, non-confrontational tone he’d adopted since becoming the Democratic nominee and immediately went on the attack.

Since then, however, Lhota has ratcheted up his rhetoric and released a strong ad that suggested that a de Blasio administration would take the city back to its crime-filled past. He followed that up by releasing a video Monday that uses clips of de Blasio’s primary opponents criticizing the public advocate.

Meanwhile, de Blasio has responded by releasing a pair of upbeat ads, one featuring his 19-year-old daughter, and another that was filled with shots of everyday New Yorkers and does not include an image of the candidate.

With the city’s attention consumed by the lopsided mayor’s race, Republican comptroller wannabe John Burnett is trying to make the case for his uphill candidacy to run the city’s pension funds and oversee the budget.

“If you were hiring somebody to monitor your own investment or if you were a CEO and had a fiduciary responsibility to make sure that you’re earning the right return for your shareholders, you want to hire the chief financial officer to help you grow the business with the right competence,” Burnett told Politicker. “It’s no different here.”

With two weeks left until Election Day, Burnett faces very long odds; he has only $6,574 left in his campaign account, and he gets virtually no media attention in the heavily Democratic city.