Of Fish Stores, Parks and Libraries 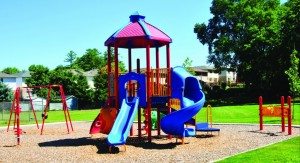 It is an old, oft-repeated tale, but still serves to prove an important point:

A fellow walked into his local fish store and asked the proprietor, a friend of his, about the sign hanging outside, which read “Fresh Fish Sold Here.”

“Fish isn’t the type of food that lasts very long,” the fellow stated. “Obviously you would be selling fresh fish!”

“You are right,” the store owner said, and proceeded to erase the word “fresh” from the sign.

“You know, the word ‘Sold’ really isn’t necessary, either,” the friend continued. “After all, no one would think that you are giving it away for free!”

A rather easy-going fellow, the shopkeeper amiably agreed and proceeded to erase the word “sold.”

The visitor surveyed the sign, which now read “Fish Here,” and continued his critique.

“Why would you need the word ‘here’?” he asked. “Why would anyone think you are selling fish across town?”

The owner was starting to get a bit frustrated, but unable to find a logical reason to dispute the assertion, he removed that word as well, and the sign — which by now looked quite pathetic — simply read “Fish.”

The visitor sniffed the air, inhaled and exhaled deeply and looked the owner straight in the eye.

“Anyone with a sense of smell realizes that you aren’t selling roses or perfume here! It is self-evident that you are selling fish!”

My friends and colleagues with libertarian-leaning positions have a valid point when they argue that the government is far too big and intrusive, but when it comes to specifics they go way too far. At the rate they are going, there will be no government left at all.

A classic example is funding for parks and libraries. My esteemed colleague on the other side of this debate will argue that the government shouldn’t get involved in such matters.

Indeed, why should it?

It should because “green spaces” such as parks keep people physically and emotionally healthier. They give adults and youngsters an opportunity to get fresh air and perform much-needed exercise as they walk, jog and play ball.

Have you ever noticed that people in more rural areas have much calmer and friendlier temperaments than city dwellers? Can you imagine how much more stressful city lives would be without even a little bit of grass to walk on?

In addition, relative to the overall budget, the amount the federal government spends on parks is so minuscule that even if the state and city governments would cut out all funding, it wouldn’t make a dent in the amount of taxes that would need to be collected.

A study commissioned by the Rauch Foundation and the Long Island Community Foundation, the Trust for Public Land, showed that parks and open spaces actually save local governments money by reducing the demand for expensive public services. It seems that residential development in Long Island (except in second-home communities) requires more in government services than it brings in in property taxes — on average, $33,000 per acre per year. Parks and open spaces cost on average just $3,750 per acre.

Parks also increase the value of nearby residential properties, because people like to live close to parks and protected open spaces and are willing to pay for the privilege.

The 2009 study showed that parks and protected open spaces raised the value of nearby residential properties on Long Island by an astonishing $5.18 billion and increased property tax revenue by $58.2 million a year.

While public libraries pose a very grave spiritual danger to Torah Jews, they actually have a positive influence on the mainstream public. They help to keep youngsters busy and off the streets, where they might be tempted to commit crimes.

While my colleague on the other side of this debate will presumably argue that both parks and libraries can be privatized, such an approach is highly impractical and unlikely to be profitable enough for entrepreneurs to want to run.

Were parks privatized, this would, of course, mean a mandatory entrance fee, which would make the parks off-limits to shomrei Shabbos Jews. On a broader note, privatizing parks would make them unaffordable for the poor, who often live in small apartments and need parks even more than do the rich, who usually have expansive backyards and sometimes even swimming pools.

Low-income families who can’t afford to buy books actually need libraries more than do the middle and upper class, yet they would struggle to pay the fees that would come with privatization.

This article appeared in print on page 34 of the October 23rd, 2013 edition of Hamodia.