Twice this year alone, Air Force officers entrusted with the launch keys to nuclear-tipped missiles have been caught leaving open a blast door that is intended to help prevent a terrorist or other intruder from entering their underground command post, Air Force officials have told The Associated Press.

The blast doors are never to be left open if one of the crew members inside is asleep — as was the case in both these instances — out of concern for the damage an intruder could cause, including the compromising of secret launch codes.

Transgressions such as this are rarely revealed publicly. But officials with direct knowledge of Air Force intercontinental ballistic missile operations told the AP that such violations have happened, undetected, many more times than in the cases of the two launch crew commanders and two deputy commanders who were given administrative punishments this year.

The blast door violations are another sign of serious trouble in the handling of the nation’s nuclear arsenal. The AP has discovered a series of problems within the ICBM force, including a failed safety inspection, the temporary sidelining of launch officers deemed unfit for duty and the abrupt firing last week of the two-star general in charge. The problems, including low morale, underscore the challenges of keeping safe such a deadly force that is constantly on alert but is unlikely ever to be used. 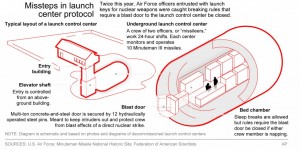 The crews who operate the missiles are trained to follow rules without fail, including the prohibition against having the blast door open when only one crew member is awake, because the costs of a mistake are so high.

The officers, known as missileers, are custodians of keys that could launch nuclear hell. The warheads on the business ends of their missiles are capable of a nuclear yield many times that of the atomic bombs dropped on Japan in 1945.

“The only way that you can have a crew member be in ‘rest status’ is if that blast door is shut and there is no possibility of anyone accessing the launch control center,” said Lt. Gen. James Kowalski, the commander of Air Force Global Strike Command. He is responsible for the entire force of 450 Minuteman 3 missiles, plus the Air Force’s nuclear-capable bombers.

The written Air Force instruction on ICBM weapon safety, last updated in June 1996, says, “One crewmember at a time may sleep on duty, but both must be awake and capable of detecting an unauthorized act if … the Launch Control Center blast door is open” or if someone other than the crew is present.

The blast door is not the first line of defense. An intruder intent on taking control of a missile command post would first face many layers of security before encountering the blast door, which — when closed — is secured by 12 hydraulically operated steel pins. The door is at the base of an elevator shaft. Entry to that elevator is controlled from an above-ground building. ICBM missile fields are monitored with security cameras and patrolled regularly by armed Air Force guards.

Each underground launch center, known as a capsule for its pill-like shape, monitors and operates 10 Minuteman 3 missiles.

The missiles stand in reinforced concrete silos and are linked to the control center by buried communications cables. The ICBMs are split evenly among “wings” based in North Dakota, Wyoming and Montana. Each wing is divided into three squadrons, each responsible for 50 missiles.

In neither of the two reported violations was security of the crews’ missiles compromised, the Air Force said in response to questions from the AP, “due to the multiple safeguards and other protections in place.” But these were clear-cut violations of what the Air Force calls “weapon system safety rules” meant to be strictly enforced in keeping with the potentially catastrophic, consequences of a breach of nuclear security.

In the two episodes confirmed by the Air Force, the multi-ton concrete-and-steel door that seals the entrance to the underground launch control center was deliberately left open while one of two crew members inside napped.

One officer lied about a violation but later admitted to it.

Sleep breaks are allowed during a 24-hour shift, known as an “alert.” But a written rule says the door — meant to keep others out and to protect the crew from the blast effects of a direct nuclear strike — must be closed if one is napping.

This article appeared in print on page 10 of the October 23rd, 2013 edition of Hamodia.