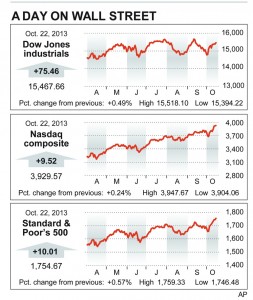 The prospect of more economic stimulus from the Federal Reserve pushed the Standard & Poor’s 500 index to a fourth consecutive record close Tuesday.

Investors also were encouraged by strong earnings from major U.S. companies such as Whirlpool, Delta Air Lines and Kimberly-Clark.

The U.S. economy added 148,000 jobs in September, the Labor Department reported Tuesday, lower than the 180,000 jobs forecast. The report was delayed for 2 1/2 weeks because of a 16-day partial government shutdown.

Analysts are also expecting the upcoming jobs report for October to be weak because the shutdown may have dampened hiring.

In the absence of stronger jobs growth, the economy will struggle to grow quickly, and that means the Fed is unlikely to stop its stimulus effort anytime soon.

“We’ve probably got another relatively soft report ahead of us,” said Jeff Kleintop, Chief Market Strategist for LPL Financial. “That’s likely to keep the Fed on hold for some time and the market seems to like that.”

The Fed has been buying $85 billion of bonds a month to keep long-term interest rates low and spur economic growth. The stimulus has been a key driver of a 4  1/2 year rally in stocks that has pushed the S&P 500 index and Dow Jones industrial average to record levels this year.

S&P 500 companies are forecast to report average earnings growth of 3.5 percent for the third quarter, according to the latest estimate from S&P Capital IQ. That would be the slowest rate of growth since the 3Q 2012.

While growth has slowed, about 2/3 of companies are reporting earnings that beat forecasts from Wall Street analysts.

In government bond trading, the yield on the 10-year Treasury note fell to 2.52 percent, its lowest level since late July, from 2.60 percent late Monday.

The yields on long-term Treasury notes are used to set the rates on consumer loans such as mortgages. Falling rates should help the housing sector by keeping the cost of home financing low.

The drop in yields “is very much supportive for the mortgage markets,” said Anastasia Amoroso, Global Market Strategist at J.P. Morgan Funds. “That is definitely a tailwind for the housing market and the consumer.”

Stocks of homebuilders also got a boost from a report that showed spending on U.S. construction projects rose at a solid pace in August, helped by further gains in residential building.

• Delta Air Lines rose 80 cents, or 3.2 percent, to $25.49. The airline made more than a billion dollars in the third quarter as more passengers paid a little bit extra to fly. Delta also said it was seeing strong winter bookings.

• Kimberly-Clark rose $4.14, or 4.2 percent, to $102.97 after the maker of Kleenex tissues and Huggies diapers said its third-quarter net income rose 6 percent.

• Coach fell $4.08, or 7.5 percent, to $50.10 after the maker of luxury handbags and accessories said its quarterly net income fell. The company is struggling with weaker sales in North America.

This article appeared in print on page 28 of the October 23rd, 2013 edition of Hamodia.