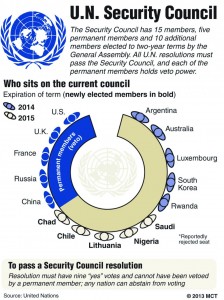 Secretary of State John Kerry sought on Monday to calm rising tensions with Saudi Arabia, which has spurned a U.N. Security Council seat in fury at inaction over the crisis in Syria.

Saudi Arabia rejected a coveted two-year term on the council on Friday in a rare display of anger over what it called “double standards” at the United Nations. Its stance won praise from its Gulf Arab allies and Egypt.

Saudi Foreign Minister Prince Saud al-Faisal hosted a lunch for Kerry at his private residence in Paris on Monday. U.S. officials said Washington and Riyadh shared the goals of a nuclear-free Iran, an end to Syria’s civil war and a stable Egypt.

A senior State Department official told reporters after the lunch that Kerry cited the advantages of being on the 15-member body, which can authorize military action, impose sanctions and set up peacekeeping operations.

“Secretary Kerry conveyed that while it is Saudi Arabia’s decision to make, the U.S. values Saudi Arabia’s leadership in the region and the international community,” the U.S. official said.

“A seat on the UNSC affords member states the opportunity to engage directly,” the official added.

The council has been paralyzed over the 31-month-old Syria conflict, with permanent members Russia and China repeatedly blocking measures to condemn Syrian President Bashar al-Assad, a longtime ally of Riyadh’s regional arch-rival Iran.

Riyadh’s frustration with Russia and China now extends to the United States, not only over Syria, but also over Washington’s acquiescence in the fall of Egypt’s Hosni Mubarak in 2011 and its new quest for a nuclear deal with Iran.

No country has previously been elected to the council and then walked away. As an incoming member, Saudi Arabia would have taken up its seat on January 1 for a two-year term. Riyadh demanded unspecified reforms in the world’s top security institution.

This article appeared in print on page 2 of the October 22nd, 2013 edition of Hamodia.