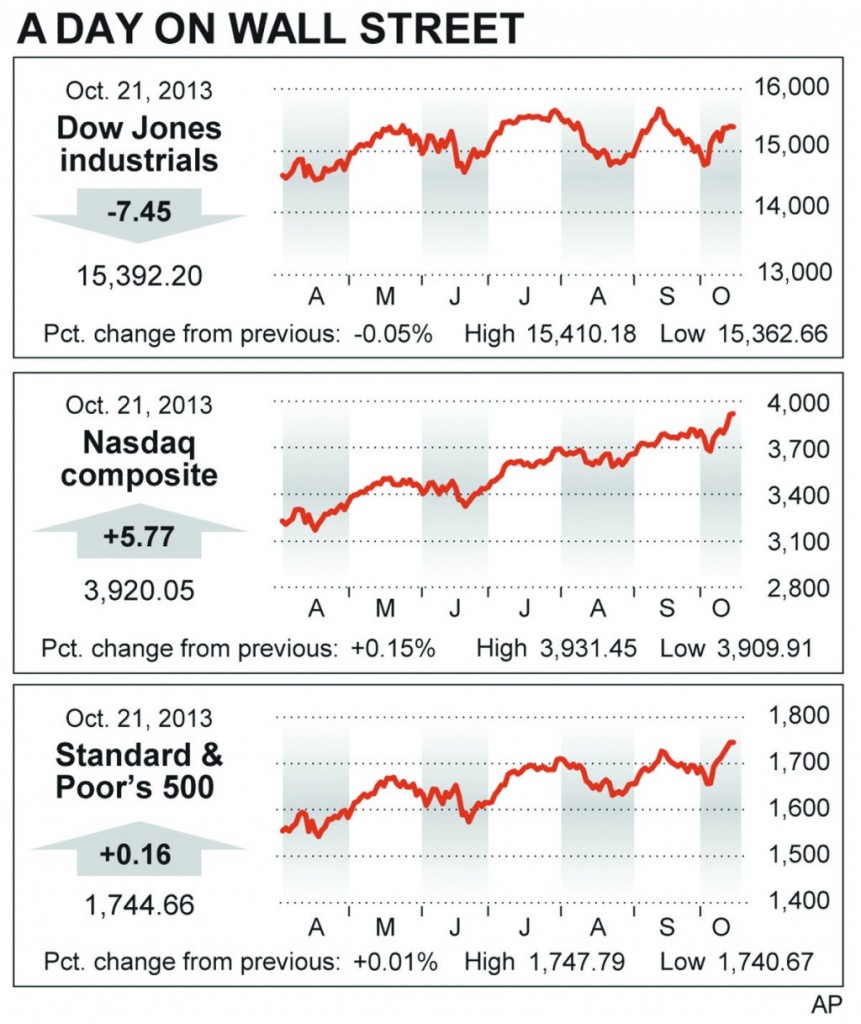 The Standard & Poor’s 500 index eked out the smallest of gains to set a record high Monday as investors assessed third-quarter earnings news.

Earnings will hold investors’ attention this week as major U.S. companies including McDonald’s, Boeing and Procter & Gamble report their results. Rising profits have been one of the key supports for this year’s rally in stocks.

Toymaker Hasbro and the V.F. Corporation, which owns clothing brands including Wrangler and The North Face, were among the biggest gainers in the S&P 500 after reporting earnings that beat analysts’ expectations. McDonald’s dipped after reporting disappointing revenue.

The S&P 500 closed up a fraction of a point at 1,744.66, an all-time high, its third consecutive record close. Stocks climbed last week after Washington reached a deal to end a 16-day government shutdown and avert a default on the nation’s debt.

The index is up 22 percent so far this year, putting it on track for its best year since 2009.

Hasbro surged after reporting that its net income rose 17 percent as sales increased. Its adjusted results and revenue topped analysts’ estimates. The stock climbed $2.48, or 5.2 percent, to $49.72. V.F. Corporation rose $6.93, or 3.4 percent, to $211.23 after its earnings beat analysts’ expectations.

Netflix jumped in after-hours trading after the company said its net income quadrupled to $32 million, or 52 cents a share. That beat analyst expectations for 48 cents a share.

Companies in the S&P 500 are expected to report earnings growth of 3.2 percent for the July – to – September period, according to the latest data from S&P Capital IQ. About 60 percent of companies that have reported earnings have beaten analysts’ expectations.

“Earnings so far have been excellent,” said Jerry Braakman, chief investment officer of First American Trust. “Earnings are coming in and beating (expectations) by a penny here and there, and we’re very comfortable with that.”

Company earnings will likely continue to grow as the outlook for the global economy brightens, as Europe continues to recover from its recession and growth in China picks up, Braakman said.

The government’s monthly jobs report for September will be released Tuesday, giving investors more information about the strength of the U.S. economy. The report, which is typically released on the first Friday of every month, was delayed because of the government shutdown.

Economists predict that the U.S. economy added 180,000 jobs in September, according to data provider FactSet. Investors may discount the report though, as it is being published more than two weeks late.

“It’s old information, it’s not as current as it normally is,” said Kate Warne, a market strategist at investment adviser, Edward Jones.

Homebuilders slumped after Americans bought fewer previously occupied homes in September than the previous month, held back by higher mortgage rates and rising prices. The National Association of Realtors said Monday that sales of re-sold homes fell 1.9 percent to a seasonally adjusted annual rate of 5.29 million.

In government bond trading, the yield on the 10-year note edged up to 2.61 percent from 2.58 percent Friday.