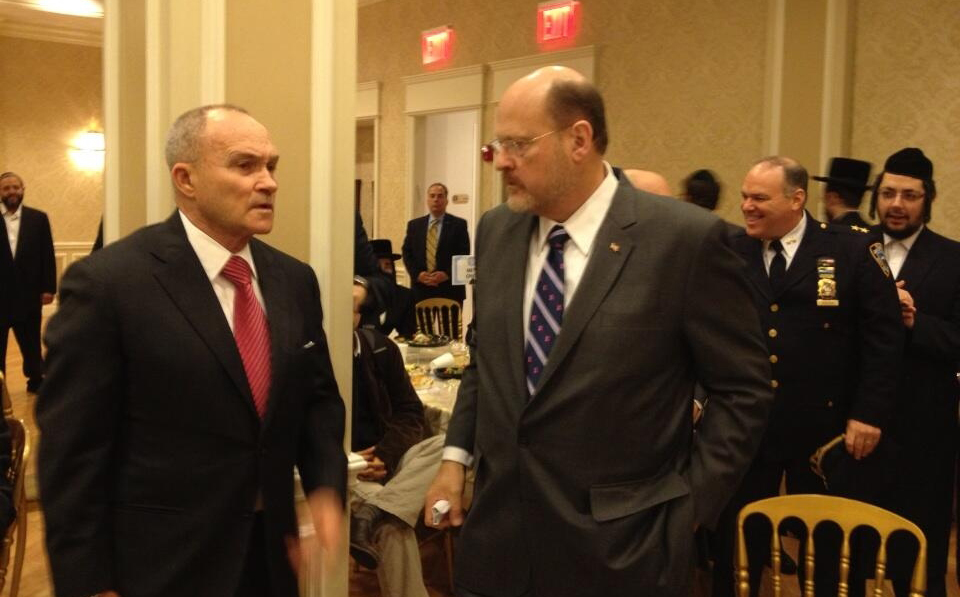 Gregory Davidzon, a self-described kingmaker in Brighton Beach politics from his perch as a Russian-language media owner, announced Thursday night a surprise last-minute write-in candidacy for the 48th council district, competing against Democrat Chaim Deutsch and Republican David Storobin in the Nov. 5 election.

Along with the candidacy rollout to replace the term-limited Mike Nelson, Davidzon said he was endorsed by Democratic Assemblyman Alec Brook-Krasny of Coney Island and Ari Kagan, who lost a bitterly fought primary battle to Deutsch, the founder of the Flatbush Shomrim.

“I’m running because I can win,” Davidzon said. “I will spend as much money as I need to. Most importantly, before I made this decision, we made our internal poll, and the numbers showed … I have a chance to win.”

Davidzon, who hosts a weekly political talk radio program in Russian, said he supports aid for private schools. Both Deutsch, an Orthodox Jew, and Storobin, a former state senator, have promised to fight to secure more help for yeshivos.

Frank Seddio, Brooklyn’s Democratic party chairman, who just days ago pronounced himself incensed that Brooklyn District Attorney Charles Hynes was running as a Republican after losing the Democratic primary, said he was “fascinated” by Davidzon, who is taking on the Democratic candidate.

“Frankly, I am surprised that they endorsed him,” Seddio said, referring to Brook-Krasny and Kagan’s endorsement. “I do know they have a long-term friendship with him. It makes the race that much more interesting.

“This all may very well be helpful to Chaim, as a sole Democrat and Orthodox Jew in a district that has a great mix of Orthodox, Asians and Russians. It gives him the edge,” Seddio continued.

Storobin and Davidzon were on opposite ends of an electoral battle last year, when the former won the Senate seat over Councilman Lew Fidler, who was heavily promoted by Davidzon.

“This proves there’s still major bad blood between Storobin and Gregory,” a Brooklyn Democratic source told Politicker. “It’s nothing more than Gregory doing what he can to prevent Storobin from winning.”

Storobin said Friday that he was willing to wager that Davidzon would not get more than a few votes.

As a write-in candidate, Davidzon has less than three weeks to promote himself, as well as to make sure that voters remember how to spell his name correctly. Even a single letter off could invalidate the ballot.

During the four days of rioting in Crown Heights in 1991, Democrat Bill de Blasio was a top aide to the official who was blamed for not making sure enough police were on hand, an explosive Daily News report charges.

De Blasio was a top aide to Dinkins’ point man in responding to the mayhem, Deputy Mayor Bill Lynch. Lynch, who died two months ago, was later blamed in a state report for serious communications and management lapses that likely delayed the Police Department’s effort to stop the violence.

In a brief interview with the News, de Blasio downplayed his involvement. He said he remained at City Hall taking calls from anxious Jewish leaders demanding more cops as the violence raged.

“I remember vividly being on the receiving end of a deep, deep concern, particularly from members of the Jewish community,” he said.

De Blasio’s campaign refused to make him available for a more in-depth interview or to answer written questions about his role.

During the violence, Yankel Rosenbaum, Hy”d, a 29-year-old Australian scholar, was stabbed to death. It took four days for police to move aggressively to restore order.

Michael Schlein, a former Dinkins aide, said that de Blasio, who was 30 at the time, was responsible for “politics and outreach.” Herbert Block, Dinkins’ liaison to the Jewish community, recalled de Blasio’s role during the crisis as “making sure Lynch was up to date.”

The state report said that Lynch knew about the inadequate police presence by the second day of the unrest but that Dinkins was not made aware until the following day, when he ordered a more robust response.

De Blasio now calls the Crown Heights conflict a “horrible perfect storm” that included a changing of the leadership within the NYPD and tensions between blacks and Jews in the neighborhood.

Asked if he would have sent more cops into Crown Heights sooner, he said, “From day one. No question.”

De Blasio Vows to Double Down On Large Soda Ban

One of the few policies on which Bill de Blasio agrees with Mayor Michael Bloomberg is his health crusade — specifically his battle to ban large sodas at restaurants, the Democrat said on Thursday.

“I think the mayor is right, and I would continue the legal process,” de Blasio said, a day after Bloomberg filed an appeal of the judge’s ruling voiding his ban. “We have to, of course, look at the specifics with our own lawyers … but there’s no question I want to see this rule go through.”

De Blasio said that he agreed with the mayor that the ban would help combat childhood obesity.

“Right now it’s hard to be a parent in New York City. I have two teenagers, I’m surviving the experience, and Chirlane and I spent a lot of time working to make sure Chiara and Dante are healthy,” de Blasio said. “Unfortunately, as parents, it feels like every day we’re fighting an enemy, and that is the growing availability of bigger and bigger sugary drinks.”

Joe Lhota’s campaign scrambled Thursday to cut deals with photographers whose pictures of New York’s crime-ridden past were used without their permission in a media ad accusing de Blasio of seeking to return the city to the 1970s.

The 30-second spot features nine images, including graffiti-painted subway trains, rioters in Crown Heights, corpses and an overturned police car. A narrator says de Blasio’s “recklessly dangerous agenda on crime will take us back to” a violent time in the city.

Lhota spokeswoman Jessica Proud said the images came from a photo-sharing website, and the campaign believed they were tagged as royalty-free. “We did our best to find everyone we could,” Proud said Wednesday.

But Thursday night, Proud said the campaign reached a deal with two of the photographers — Richard Sandler, who snapped an elderly woman clutching a pole inside a graffiti-covered subway train in 1985, and Matt Weber, who captured a fight outside a Times Square theater in 1989.

However, Q. Sakamaki, who photographed rioters at Tompkins Square Park in 1991 and a corpse on a Lower East Side sidewalk in 1990, and Eli Reed, who captured the NYPD rescuing a couple under attack by Crown Heights rioters, said they were not contacted by Lhota’s campaign.

Sakamaki said he was “very upset that somebody would use it for a political campaign.” And Reed, now a photography professor at the University of Texas at Austin, said he wouldn’t allow his work to be featured in such a political ad.

The first endorsement of the general election was announced Friday, and it went to Republican Joe Lhota, who trails de Blasio by about 45 points in the polls.

Crain’s New York noted that a step beyond the rhetoric shows that both candidates have similar goals — “to stop punishing small businesses, to increase the city’s supply of affordable housing and to expand early-childhood education.” So New Yorkers should vote for the person most capable of fulfilling these ambitions.

The editors said that while Lhota is not inspirational or exciting, “his strengths more than compensate.”

“The first function of the city’s CEO is to run its sprawling bureaucracy, and Mr. Lhota has the ability and experience to do that exceptionally well,” they wrote. “He would break down the silos in which some city agencies reside, ensuring that they work together and within a clear chain of command. At the same time, he would not run roughshod over commissioners who understand their fields far better than he does. Mr. Lhota possesses a refreshing combination of competence and humility.”

Hispanic NYPD Groups Push Their Own for Commissioner

Three Hispanic groups in the New York Police Department are urging the next mayor to appoint the city’s first Hispanic police commissioner.

Members of the Hispanic Society, the National Latino Officers Association and the New York Dominican Officers Organization held a news conference in front of police headquarters Sunday to propose First Deputy Commissioner Rafael Pineiro to replace Raymond Kelly in January, when a new mayor is sworn in.

Neither major-party candidate has mentioned any Hispanic names as possible candidates.

Detective Dennis Gonzales, president of the Hispanic Society, says a member of a minority community might have a better understanding of controversial issues such as the NYPD’s street stop policy.

“Race to City Hall 2013” is a daily Hamodia column focusing on the New York City mayoral race, ahead of the general election on Nov. 5. It is culled from reports by The Associated Press, Politicker, The New York Post, The New York Times, the Daily News, City & State, Capital New York and others.