Business Initial Jobless Claims Drop to 358,000 But Are Skewed by Shutdown
Business 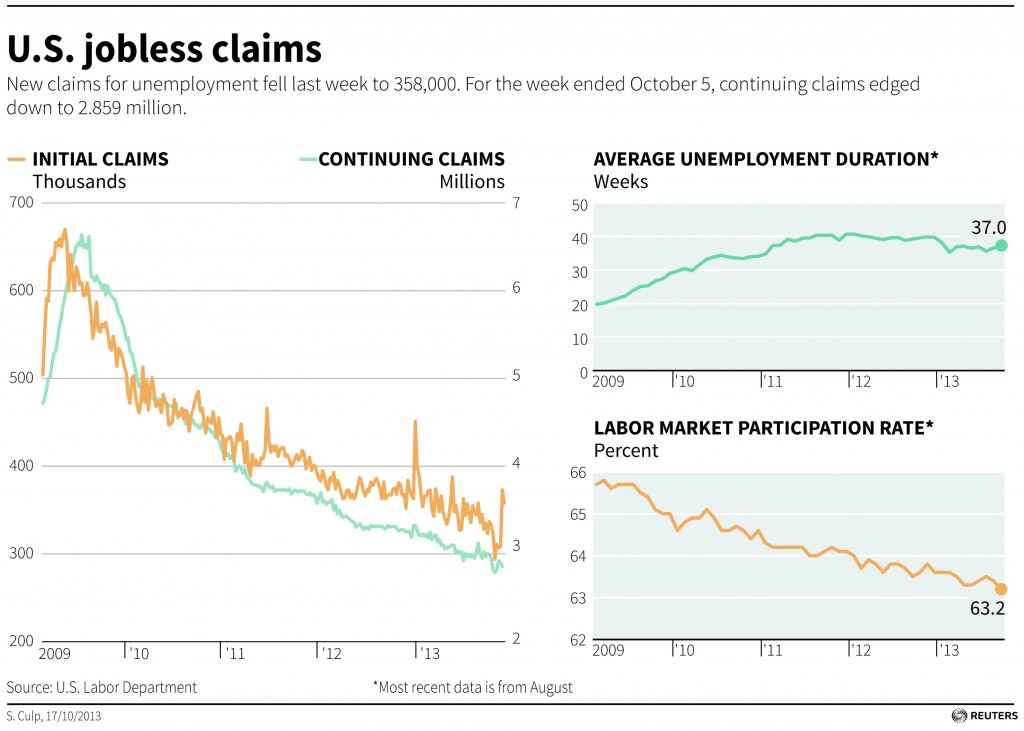 The number of people filing for first-time unemployment benefits dropped from the previous week’s revised figure of 373,000, which had surged because of the furlough of about 800,000 federal workers starting Oct. 1, the Labor Department said Thursday.

Analysts had expected the jobless claims to drop last week to about 330,000.

In the week ending Oct. 5, the number of federal employees filing initial jobless claims jumped to 70,068 from 1,391 the previous week, the Labor Department said. Those are the most up-to-date statistics.

But the data have been highly volatile for several weeks, first because of computer problems in California and Nevada and then because of the shutdown.

The weekly jobless claims report was the only government economic data released during the shutdown. The information is collected by the states and the Labor Department’s Employment and Training Administration continued providing services because the shutdown did not cause a lapse in payments for unemployment benefits.

Federal workers returned to their jobs Thursday after President Barack Obama signed legislation funding the government until Jan. 15 and suspending the debt limit until Feb. 7.

But Labor and Commerce departments spokespeople said Thursday they did not know when the flow of government economic data would resume. Numerous reports, including the monthly jobs report, were postponed.

Computer problems in California and Nevada led those states to underreport their claims and pushed the national figure to 292,000 in the week ending Sept. 7. That was the lowest level since 2006.

California was still working through its backlog in the week ending Oct. 5. The state reported an increase of 33,654 claims because they had been delayed by computer troubles at the Employment Development Department.

The partial government shutdown caused claims to jump this month as furloughed workers applied for benefits. The 373,000 claims in the week ending Oct. 5 were the most since Superstorm Sandy hit the East Coast in November.

The states with the biggest increases in claims by federal employees for the week ending Oct. 5 were Maryland with 17,368, Texas with 7,191, Pennsylvania with 4,416, Utah with 3,978 and Washington state with 3,380, the Labor Department said.