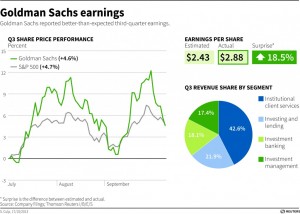 Goldman Sachs says its third-quarter profit was flat while revenue fell sharply as trading in bonds and other securities slowed.

THE RESULTS: The bank earned $1.43 billion after paying dividends on preferred shares, down slightly from $1.46 billion in the July-September period a year earlier. That worked out to $2.88 per share, up from $2.85 per share last year and beating the $2.44 per share expected by financial analysts.

Revenue dropped 20 percent to $6.72 billion from $8.35 billion, coming in below the $7.41 billion that analysts forecast as trading in bonds, mortgage securities and currencies fell.

HOW IT HAPPENED: Goldman blamed the drop in trading revenue on jittery markets. Investors were uncertain about whether and when the Federal Reserve would begin to reduce its bond purchases of $85 billion a month, which are intended to keep longer-term interest rates low and buttress the economic recovery.

The bank was able to keep net income steady despite the slump in revenues by cutting expenses. Expenses fell 25 percent from a year earlier, to $4.56 billion.

WHAT’S NEXT? Goldman expects investors’ confidence to improve in the coming months.

DIVIDEND, STOCK ACTION: The bank increased its dividend to 55 cents per share from 50 cents. Goldman’s stock, which was recently added to the Dow Jones industrial average, fell $3.93, or 2.42 percent, to close at $158.32.