Back to Work Following 16-Day Shutdown

From the Liberty Bell to Alcatraz, federal landmarks and offices reopened Thursday. Furloughed employees were relieved to get back to work even if they were faced with email backlogs, but many worried about another such disruption in a matter of months.

“We’d hate to have to live through this all over again,” Richard Marcus, a 29-year employee of the National Archives in Washington, said after the government shutdown finally ended.

Nationwide, from big-city office buildings to wilderness outposts, innumerable federal services and operations shifted back into gear after 16 days.

The U.S. Forest Service started lifting a logging ban on national forests. U.S. Citizenship and Immigration Services restarted the computerized system used to verify the legal status of workers. Boat trips resumed to Alcatraz, the former federal prison in San Francisco Bay, with 1,600 tickets snapped up by tourists in the first hour of business.

More than 20,000 National Park Service employees had been among the 800,000 federal workers sent home at the peak of the shutdown.

At Yellowstone and Grand Teton national parks, employees were busy with reopening chores. They returned just in time to begin closing the parks up again for the winter in a couple of weeks. 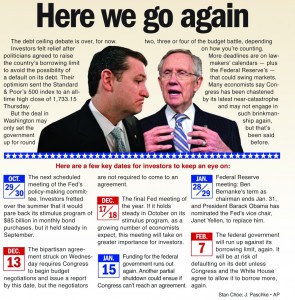 Among the many sites reopening in Washington were the Smithsonian Institution’s museums and the World War II memorial on the National Mall, which had been the scene of protests over the shutdown.

The National Zoo was set to reopen Friday, though its popular panda cam went live Thursday morning, giving fans a view of a cub wriggling about as its mother, Mei Xiang, tucked her paws under her chin and watched.

Federal workers who were furloughed or worked without pay during the shutdown will get back pay in their next paychecks, which for most employees come Oct. 29.

“Unfortunately, as President Obama correctly noted, you are occasionally called on to perform your remarkably important work in a climate that too often treats federal employees and contractors as a punching bag,” Perez said.

The Defense Department called back about 7,000 furloughed civilians. In an open letter to the workforce, Defense Secretary Chuck Hagel said the department still faces budget uncertainty as Congress struggles to pass a 2014 spending bill and deal with automatic budget cuts. Pentagon Comptroller Robert Hale said the department lost at least $600 million worth of productivity during the four days that civilians were furloughed.

The National Institutes of Health warned university scientists not to expect a quick resumption of research dollars.

At the National Institute of Standards and Technology in Gaithersburg, Md., email servers were slowly grinding back into gear.

Fire protection engineer Dan Madrzykowski had been in the office for about half an hour and about 800 emails had popped into his inbox. And that represented less than a week of the shutdown. Still, Madrzykowski said he was pleased to be back.

“I don’t have a really good outlook on the government,” he said.

This article appeared in print on page 1 of the October 18th, 2013 edition of Hamodia.