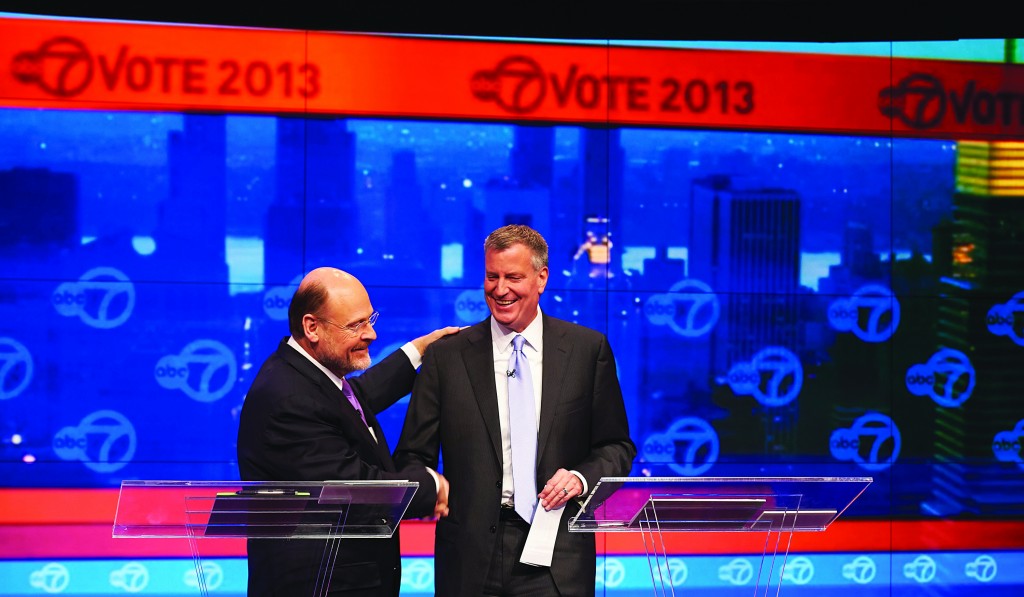 “I have known Bill de Blasio for over a decade,” said Greenfield, a Democrat representing Boro Park and Flatbush. “He is the right leader to achieve these goals and I will do all that I can to help him get these things done as mayor.”

Prior to becoming the city’s public advocate in 2009, de Blasio was a city councilman representing parts of Boro Park adjacent to Greenfield’s district.

Republican Joe Lhota on Wednesday released a dramatic ad, using footage of a recent biker gang attack and crime-heavy imagery from the 1980s to suggest that the city would return to its violent past if Democrat Bill de Blasio is elected.

Lhota, a former deputy mayor to Rudolph Giuliani who is trailing  in the polls, centers the ad around the dramatic video of the biker attack that left several people, including a young father, injured. It then segues into harrowing black-and-white images from the 1970s and ‘80s, including footage of an overturned police car, a man holding a gun and corpses sprawled on the ground.

The 30-second spot, which will air on the city’s broadcast networks, warns that de Blasio has a “recklessly dangerous agenda on crime” because he suggested he would meet with biker groups.

The ad takes off from Lhota’s frequent criticism of de Blasio for wanting to reform the police department’s stop-and-frisk policy, which allows officers to stop anyone deemed acting suspiciously.

Speaking to reporters at a rally in Manhattan, de Blasio compared the ad to the infamous “Willie Horton” commercial run by George H.W. Bush’s 1988 presidential campaign against Michael Dukakis. The ad featured Horton, an African-American who committed violence while out on furlough, to paint Dukakis as soft on crime.

“This is just like the Willie Horton ad,” de Blasio said. “It is divisive and negative.”

A Lhota spokeswoman said the campaign stands by the ad.

Bill de Blasio may be up by 45 points over Joe Lhota, but that didn’t stop him from coming out aggressively in their first debate Tuesday night. The public advocate repeatedly attacked Lhota by linking him to the national Republican party, which is largely unpopular in a city where Democrats outnumber the GOP by a 6-to-1 margin.

“My opponent told the Staten Island Tea Party that their values are so close to his,” said de Blasio, trying to group Lhota, a former head of the city’s transit agency, with the right-wing Republican faction that polling suggests is largely being blamed for the federal government shutdown.

The jabs frequently put Lhota on the defensive on a night when he desperately needed to land blows on the front-runner. Lhota called de Blasio’s line of attack “unbecoming” and accused him of “lying” repeatedly about his record.

“You keep talking about me like I’m some sort of national Republican,” said Lhota, who is more moderate than the tea party on most issues. “Don’t lump me in with people I’m often in disagreement with.”

The two men disagreed on a host of issues ranging from tax increases to public safety to their baseball allegiances, each presenting themselves as the most qualified choice to lead a city preparing to take its first steps beyond the 12-year reign of Mayor Michael Bloomberg.

The debate, the first of three in as many weeks, at times resembled a wonky policy seminar, as the men delved into the minutia of building codes and tax abatements. But it was also punctuated by a series of sharp exchanges, including when Lhota suggested that the city’s record low crime rate, largely achieved under GOP administrations, may be in jeopardy if de Blasio were elected.

Lhota called de Blasio “untested” and reiterated his executive experience as former deputy mayor under Rudolph Giuliani and his stint as head of the city’s transit agency.

“I can be mayor one day without any training, without any learning curve whatsoever,” Lhota said.

De Blasio said he would repair strained relationships between the police and minority communities and defended the suggestion that his signature campaign proposal, a tax increase on the wealthy to fund universal pre-kindergarten, would be defeated by state lawmakers.

“We’ll get it passed in Albany because we’ll get tremendous public support for it,” said de Blasio, who has frequently pointed to his high poll numbers — several surveys have him up by nearly 50 points over Lhota — as a mandate for the plan.

On Wednesday, however, Gov. Andrew Cuomo told the Daily News that a tax hike could force wealthy residents to leave the state, depriving New York of a tax base. He said he wanted to cut taxes next year — he established two committees to look into various ideas — adding that it was important that the “arrow is pointed down.”

“What they fear is that they’re in a place where the taxes will continually go up and there will be a ceiling and they’ll say, ‘I’m going to Florida,’” he said of the wealthy. “I believe that.”

Cuomo, said the Daily News editorial board, “virtually shot down the possibility next year that the state would take up a de Blasio plan to hike the city tax rate,” especially as Cuomo faces voters in 2014 after three years of cutting taxes.

“If [de Blasio is] elected and if he comes to Albany, he can make his case and we will hear him out and let’s have a fulsome discussion, but this is a conversation we just had,” he said.

It was unclear if Lhota landed the blows he needed with time running out on his fledgling campaign. With only three weeks to Election Day, his campaign hopes his showing will inspire reluctant donors to give money that will help fund a last-minute ad blitz.

Many of the industries that normally back Republicans, like the real estate and financial sectors, have been wary of alienating de Blasio and have yet to give much in the way of financial support to Lhota.

Critics Call on CNYC to Print Candidates in Larger Fonts

A group of elected officials and government watchdog groups criticized the city’s Board of Elections on Tuesday after it decided to print the ballots for the November elections with candidates’ names in a miniature, six-point font. (This newspaper font, comparatively, is 9.5 font.)

“Voters have a right to clear, readable ballots,” said Brian Kavanagh, a state assemblyman from Manhattan.

As to a suggestion to print separate bilingual ballots, Ryan said that was under consideration for the future but was not possible this year. He said poll sites would have magnifying glasses available, as well as ballot-marking devices to allow voters to see their ballots enlarged up to 22-point font.

The typeface this year will not be the smallest ever used; in 2010, the board used a five-point font.

Reacting to a rush of new charter schools being approved, Bill de Blasio said that if elected, he would “immediately” review all decisions Mayor Michael Bloomberg makes in his last months in office, with an eye on cancelling those he disapproves of.

With de Blasio saying he was against charter schools, which are taxpayer funded but privately run and have nonunionized teachers, the Department of Education has been rushing to extend permits to an additional 23 charters and provide them with free space in city buildings.

De Blasio has vowed to end permission for any of the city’s 183 charter schools to meet in public school facilities.

The frontrunner said that he wants to reevaluate other Bloomberg moves as well, such as the New York City Housing Authority plan to lease some of its land to private developers.

However, City Hall veterans say that it is very difficult to stop projects that are already in the pipeline.

“If you cancel a bunch of charter-school leases, you have a bunch of kids who are going to be flooding your [regular] schools,” one former Bloomberg aide said. “That’s going to be a problem not just for charter parents but for parents in the [public] schools.”

Calling it a matter of “respect” for the growing number of Muslims in the city, Bill de Blasio on Wednesday said he supports closing public schools for their holidays.

“A child who has an exam on a day that right now is one of the Eid holidays, they’re either respecting their religious obligation or they’re doing what their education requires of them. And they can’t do both under our current system,” de Blasio said at a Muslims for de Blasio rally in Brooklyn.

Muslim advocates have been pushing for the city to give kids the days off for years, but Bloomberg has refused. The school calendar currently has 13 days off for religion, including Jewish and Catholic holidays.

Officials estimate about 12 percent of the city’s public school population are Muslim, and the number is growing.

De Blasio Would Be Tallest NYC Mayor on Record

At 6 feet, 5 inches, a mayor Bill de Blasio would require new beds at Gracie Mansion and New Yorkers would get a whole new perspective at how they look up to their mayor. That is because he would be the tallest chief executive in living memory, and likely of all time.

“I certainly can’t think of anybody who was taller,” chuckled historian Chris McNickle to the Wall Street Journal.

From campaign stops to mayoral forums, de Blasio’s lofty presence has been an inescapable feature of the race. The campaign once posted a photo of a back-to-back height contest with a voter on a sidewalk.

Among the most common campaign-trail images of de Blasio are of him hunching downward to speak to voters.

“I want to be close to people, I want to hear what they’re saying,” he said. “I don’t want there to be a sense of distance.”

Height can be an advantage in politics, said Andrew Moesel, a political consultant.

“He’s an imposing presence,” he said of de Blasio. “If everyone turns when you enter a room, that’s good for a politician.”

According to McNickle, de Blasio would, if elected, claim the title of tallest mayor from John Lindsay, who was 6 feet, 3 inches. Republican Joe Lhota, at 6 feet, 2 inches, would also be among the city’s tallest mayors, tying with Ed Koch.

“Race to City Hall 2013” is a daily Hamodia column focusing on the New York City mayoral race ahead of the general election on Nov. 5. It is culled from reports from The Associated Press, Politicker, the New York Post, New York Times, Daily News, City & State, Capital New York and others.