U.S. Senate leaders announced a deal on Wednesday to end a political crisis that partially shut down the federal government and brought the world’s biggest economy close to a debt default that economists said threatened financial calamity.

U.S. stocks surged, nearing an all-time high, on news of the deal, but trading volumes remained low, underscoring how the political brinkmanship in Washington has unnerved Wall Street.

A stand-off between Republicans and the White House over funding the government and raising its borrowing authority forced the temporary lay-off of hundreds of thousands of government workers and created concern that crisis-driven politics was the “new normal” in Washington.

Senator John McCain, whose fellow Republicans triggered the crisis with demands that President Barack Obama’s signature “Obamacare” healthcare law be defunded, said on Wednesday the deal marked the “end of an agonizing odyssey” for Americans.

“It is one of the most shameful chapters I have seen in the years I’ve spent in the Senate,” said McCain, who had repeatedly warned Republicans not to link their demands for Obamacare changes to the debt limit or government spending bill.

But even if the Senate and House manage to overcome procedural hurdles to seal the deal before Thursday — when the Treasury says it will exhaust its borrowing authority — it will only be a temporary solution that sets up the prospect of another showdown early next year.

The deal that emerged on Wednesday would extend U.S. borrowing authority until February 7, although the Treasury Department would have tools to temporarily extend its borrowing capacity beyond that date if Congress failed to act early next year. It would also fund government agencies until January 15.

The deal includes some income verification procedures for those seeking subsidies under the healthcare law, but Republicans surrendered on their attempts to include other changes, including the elimination of a medical device tax used to help pay for it.

Congressional aides said the House and Senate were expected to approve the fiscal deal on Wednesday, clearing the way for Obama to sign it into law before Thursday’s deadline.

While analysts and U.S. officials say the government will still have roughly $30 billion in cash to pay many obligations for at least a few days after October 17, the financial sector may begin to seize up if the deal is not finalized in both chambers.

The planned votes signal a temporary ceasefire between Republicans and the White House in their latest no-holds-barred struggle over spending and deficits that has at times paralyzed both decision-making and basic functions of government. 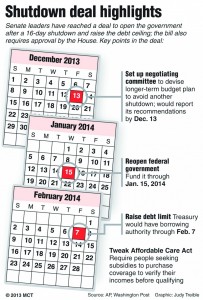 The political dysfunction has worried U.S. allies and creditors such as China, the biggest holder of U.S. debt, and raised questions about the impact on America’s prestige.

The U.S. Treasury has said the political impasse risks hurting the United States’ international reputation as a safe haven and stable financial center.

Senate Majority Leader Harry Reid and Republican leader Mitch McConnell announced the fiscal agreement on the Senate floor, where it was expected to win swift approval after a main Republican critic of the deal, Senator Ted Cruz of Texas, said he would not use procedural moves to delay a vote.

The deal is seen as a victory for Obama, who refused to negotiate on changes to Obamacare, and a loss for House of Representatives Speaker John Boehner, who again failed to marshal his Republican caucus, particularly lawmakers aligned to the conservative, small government Tea Party movement.

Fitch Ratings said on Tuesday it could cut the U.S. sovereign credit rating from AAA, citing the political brinkmanship over raising the debt ceiling.

The deal announced on Wednesday would basically give Obama what he has demanded for months: A straightforward debt limit hike and government funding bill.

Many political pundits and Democratic Party politicians have predicted for weeks that a faction of Republicans in the House would drag out the crisis before making a last-minute deal.

A Rasmussen poll on Wednesday showed that if congressional elections were held today, 78 percent of Americans would like to see the entire Congress thrown out and replaced.

This article appeared in print on page 1 of the October 17th, 2013 edition of Hamodia.