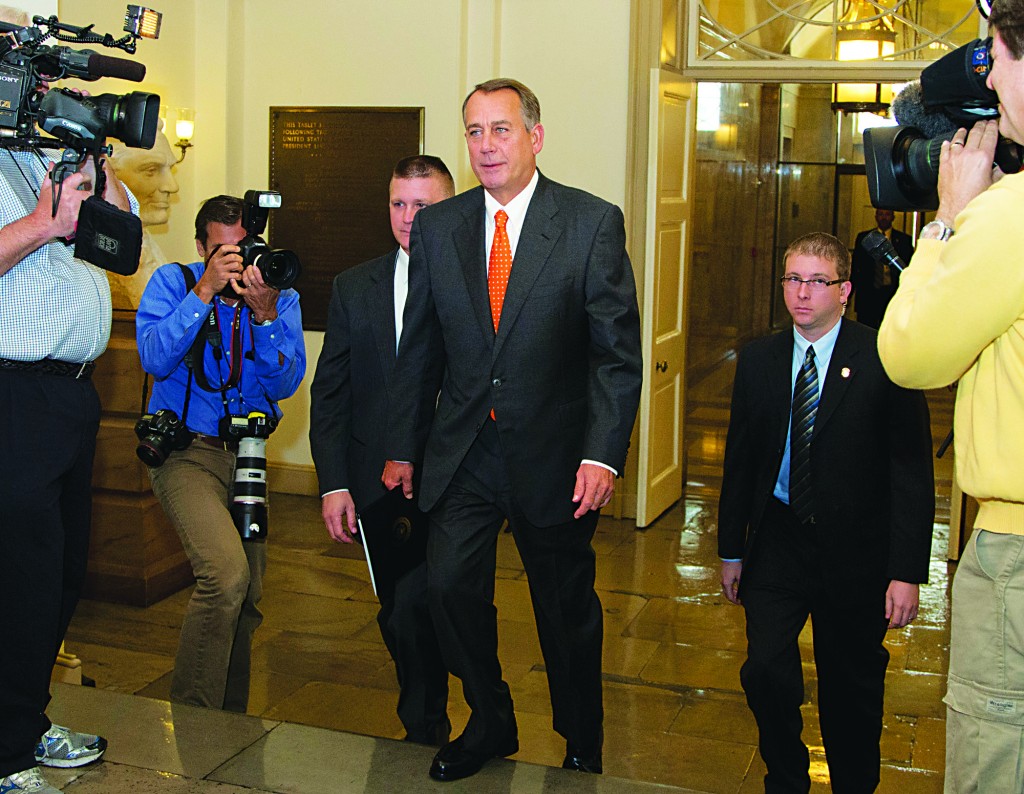 Up against one last deadline, Congress raced to pass legislation Wednesday avoiding a threatened national default and ending a 16-day partial government shutdown along the strict terms set by President Barack Obama when the twin crises began.

“We fought the good fight. We just didn’t win,” conceded House Speaker John Boehner as lawmakers lined up to vote on a bill that fell far short of Republican wishes.

A Senate vote was set first on the legislation, which would permit the Treasury to borrow normally through Feb. 7 or perhaps a few weeks longer, and fund the government through Jan. 15. More than two million federal workers – those who had remained on the job and those who had been furloughed – would be paid under the agreement.

Across the Capitol, members of the House marked time until their turn came to vote.

After weeks of gridlock, the measure had support from the White House, most if not all Democrats in Congress and many Republicans fearful of the economic impact of a default. As a result, there was little or no doubt it would pass both houses and reach the White House in time for Obama’s signature before the administration’s Oct. 17 deadline.

That was the day that Treasury Secretary Jacob Lew said the Treasury would reach the current $16.7 trillion debt limit, and could no longer borrow to meet its obligations.

“The compromise we reached will provide our economy with the stability it desperately needs,” said Senate Majority Leader Harry Reid, declaring that the nation “came to the brink of disaster” before sealing an agreement.

Senate Republican Leader Mitch McConnell, who negotiated the deal with Reid, emphasized that it preserved a round of spending cuts negotiated two years ago with Obama and Democrats. As a result, he said, “government spending (in one major category of programs) has declined for two years in a row” for the first time since the Korean War. “And we’re not going back on this agreement,” he added.

The U.S. Chamber of Commerce came out in favor of the bill.

Simplicity at the end, there was next to nothing in the agreement beyond authorization for the Treasury to resume borrowing and funding for the government to reopen.

House and Senate negotiators are to meet this fall to see if progress is possible on a broad deficit-reduction compromise of the type that has proved elusive in the current era of divided government.

Additionally, Health and Human Services Secretary Kathleen Sebelius is to be required to produce a report stating that her agency is capable of verifying the incomes of individuals who apply for federal subsidies under the health care law known as Obamacare.

Obama had insisted repeatedly he would not pay “ransom” by yielding to Republican demands for significant changes to the health care overhaul in exchange for funding the government and permitting Treasury the borrowing latitude to pay the nation’s bills.

Other issues fell by the wayside in a final deal, including a Republican proposal for the suspension of a medical device tax in Obamacare and a Democratic call to delay a fee on companies for everyone who receives health coverage under an employer-sponsored plan.

The shutdown initially idled about 800,000 workers, but that soon fell to about 350,000 after Congress agreed to let furloughed Pentagon employees return to work. While there was widespread inconvenience, the mail was delivered, Medicare continued to pay doctors who treated seniors and there was no interruption in Social Security benefits.

Still, national parks were closed to the detriment of tourists and local businesses, government research scientists were sent home and Food and Drug Administration inspectors worked only sporadically.

Obama and Boehner both came to the same conclusion – that they would allow the shutdown to persist for two weeks, until it became politically possible to reopen government and address the threat of default at the same time.

As the Oct. 17 debt-limit deadline approached, there were warnings from European officials as well as Cabinet members and bankers in this country that failure to raise the debt limit invited an economic disaster far worse than the near-meltdown of 2008.

On Tuesday, the Fitch credit rating agency said it was reviewing its AAA rating on U.S. government debt for possible downgrade.

By then, the endgame was underway.

Late last week, Obama met with Boehner and House Republicans at the White House. The session resulted in brief follow-up talks in which GOP aides suggested easing the across-the-board spending cuts in exchange for changes in benefit programs such as making Medicare more expensive for better-off beneficiaries.

After that faltered, Reid and McConnell announced over the weekend they were seeking a deal to solve the crises, and expressed hope they could quickly come to an agreement.

That effort was suspended on Tuesday, a day of suspense in which Boehner made one last stab at a conservatives’ solution. When his rank and file refused to coalesce around any proposal, he gave up and McConnell and Reid returned to their labors.