U.S. Stocks Down as Investors Wait on Debt News 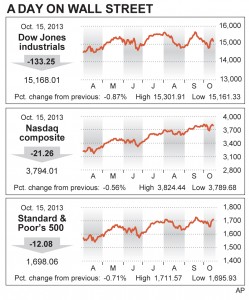 The stock market was whipsawed Tuesday as the on-again, off-again talk of a debt deal in Washington made investors wonder just how pessimistic they should be.

Stocks were flat or down all day, but the size of the losses waxed and waned depending on which politician was giving a press conference. The market closed with its first loss in a week, with the Dow Jones industrials down 133 points. Yields on short-term government debt rose sharply as investors worried about the possibility of a default.

Indexes were down only slightly early Tuesday, when Republican and Democratic leaders in the Senate reported that a deal over increasing the nation’s borrowing limit appeared to be getting closer. But after House Republicans came up with their own competing plan later in the day, and it was rejected by Democrats, stocks fell further.

The stakes are high and the deadline is getting nearer. Unless the borrowing limit is raised, the U.S. will bump up against a Thursday deadline after which it can no longer borrow money to pay its bills, which could lead to a default on government debt. That possibility has rattled markets all month.

After markets closed, Fitch Ratings said it might downgrade the government’s AAA bond rating. The agency said it sees a higher risk for default because of the uncertainty over whether Congress will raise the debt limit. Fitch said it will make a final decision by the end of March at the latest, depending on how long any agreement to raise the debt ceiling lasts.

It was clear that traders were hanging on every word out of Washington. The losses on the Dow shrank by about 40 points during a short press conference by House Speaker John Boehner shortly before noon Eastern.

Another reason for Wall Street’s pessimism is that any deal reached this week might simply set up another showdown a few months down the road.

The losses were broad. All 10 industry groups in the S&P 500 fell and three stocks fell for every one that rose on the New York Stock Exchange.

Uri Landesman, president of Platinum Partners, a New York-based investment management group, said he thinks there will be a deal, but that investors are making a mistake to focus on it so heavily since the economy still has so many risks. Investors aren’t appreciating the risk of poor economic reports, slow profit growth and the possibility of flare-ups in conflicts with Iran and Syria, which could cause a spike in energy prices.

“There’s a lot more risk to the downside,” Landesman said. “I don’t think things are that robust out there.”

This article appeared in print on page 28 of the October 16th, 2013 edition of Hamodia.