Gracie Mansion Could Be a Mayor’s Home Again

New York City’s most famous house is on the verge of becoming a home again.

Gracie Mansion, the 214-year-old building that is the official residence of the city’s mayor, has sat vacant for the last 12 years after Michael Bloomberg instead elected to live in his luxurious Upper East Side town house.

Although he has never spent a night there, Bloomberg poured millions into a sweeping renovation of the graceful Federal-style mansion, which sits in a Manhattan park that overlooks the powerful confluence of the East River and the Long Island Sound.

But with Bloomberg leaving office at year’s end, Gracie Mansion, which has been open to the public as a museum and used to host city receptions, will again become a private residence, a legacy that is etched right in its glass.

Hidden behind a curtain in one of the mansion’s front rooms is a small window that has been the victim of loving graffiti done by children of former mayors. Then-12-year-old Caroline Giuliani, daughter of Rudy, carved “Caroline 2001” into the window before moving out, following the example of John Lindsay’s daughter Margaret, who etched her name in 1965. 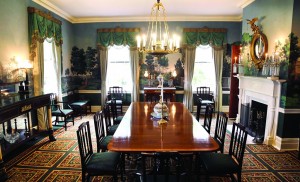 The major mayoral candidates have all indicated they would likely move into the mansion if elected.

Public Advocate Bill de Blasio, the Democratic nominee who has a commanding lead in the polls, will not comment on the mansion these days, saying he does not want to appear overconfident of victory. But at a candidate forum this year, he noted that the Brooklyn home he shares with his wife and two children gets crowded, and “Gracie obviously has a little more space.”

Republican Joe Lhota has said he would live there with his family, but has allowed that he might occasionally spend a weekend night back in his Brooklyn home. 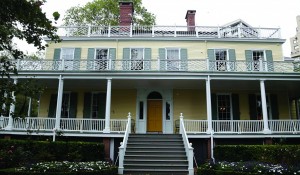 Gracie Mansion has changed considerably since the Giuliani family departed in December 2001. Soon after taking office, Bloomberg, under the guise of being an anonymous donor, gave $7 million to refurbish the home’s porches, stairs and bathrooms.

“The place was falling apart,” said Susan Danilow, executive director of the nonprofit Gracie Mansion Conservancy. “Mayor Bloomberg may not have lived there, but he really loves the home.”

The kitchen was redone last year at a cost of $1.25 million, money that was raised by the conservancy. The nonprofit organization was established in 1981 by Mayor Ed Koch to preserve the mansion.

The four-bedroom home, which Bloomberg uses for weekly meetings, has 12 full-time employees, including kitchen and gardening staff. The bulk of the mansion’s $1.7 million operating budget is picked up by the city, with additional costs paid by the conservancy.

This article appeared in print on page 16 of the October 16th, 2013 edition of Hamodia.