Cory Booker’s path to Wednesday’s U.S. Senate election has been bumpier than anticipated.

Even Republicans had expected Booker, a Democrat in a Democratic-leaning state, to cruise to victory by a wide margin over little-known Republican Steve Lonegan in the special election to replace former Sen. Frank Lautenberg, who died in June. While Booker holds a double-digit lead in most polls, the charismatic Newark mayor has faced sustained Republican criticism that has exposed vulnerabilities.

After weeks of calling himself a uniter and mostly ignoring Lonegan, who would become the first senator who is legally blind, the sustained assault has gotten Booker’s attention. He has aggressively hit back in the past several weeks, castigating Lonegan seemingly at every turn, using the brass-knuckled political skills he learned in the rough-and-tumble world of Newark politics. 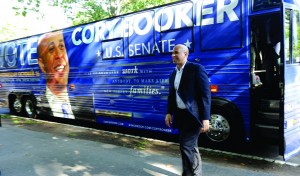 “Sending him to Washington would be like pouring gasoline on a fire,” Booker said, calling Lonegan a member of the “Tea Party fringe” that “hijacked” the government and caused a shutdown. In a debate last week, Booker said the former mayor of Bogota, a small borough in Bergen County, “ran his city into a ditch” and asked for a state bailout.

Before dropping in the polls, Booker had focused more on policy differences while largely avoided local media interviews. Instead, he held regular “run with Cory” events, where a group of supporters jogged a mile with the mayor.

For most of the campaign, Lonegan has gotten little help from Republicans outside the state, save for endorsements from former vice presidential candidate Sarah Palin, Kentucky Sen. Rand Paul and Texas Gov. Rick Perry, all Tea Party favorites. The Senate Republican campaign arm hasn’t sent any staffers into New Jersey — a standard practice in competitive races — and hasn’t spent money on ads.

“Mayor Lonegan is clearly the necessary choice,” Harav Kamenetzky said in the call, which was dialed to Orthodox Jewish homes in the state. “He is a forthright proponent of defending our Torah values — including life, morality, and marriage — as well as fighting for our religious liberty.”

In an 11th hour push for Lonegan, Tea Party leaders have begun coordinating phone banks and a get-out-the-vote effort. Democrats in Washington mostly stayed out of the race until the final week. President Barack Obama released a video Monday urging voters to cast ballots for Booker and DNC Chairwoman Debbie Wasserman Schultz stumped with Booker on Sunday. New York Mayor Michael Bloomberg, a longtime Booker supporter, spent $1 million on an ad for Booker.

Booker campaign officials say they expected all along that the race would tighten, because no New Jersey Democrat running statewide has won with more than 60 percent of the vote in a generation. But they say they’re confident that the double digit lead in the polls will be borne out on Election Day.

“We knew there would be a narrowing,” Booker said, “and so far the election has gone for us exactly according to plan.”

Still, Republicans in Washington say they’re pleased that Booker has had to work harder than anyone imagined. And they suggest that Booker is making mistakes that could come back to haunt him as he eyes his political future. Some Democrats have mused about the possibility that Booker — a gifted public speaker who is young at age 44 — could make an attractive vice presidential candidate in 2016.

There’s little doubt that Booker has national aspirations. He’s spent a chunk of his mayoral tenure traveling the country, meeting with big donors and raising money in places like Hollywood and Silicon Valley.

Lonegan, however, says his campaign is “cresting.”

This article appeared in print on page 1 of the October 16th, 2013 edition of Hamodia.