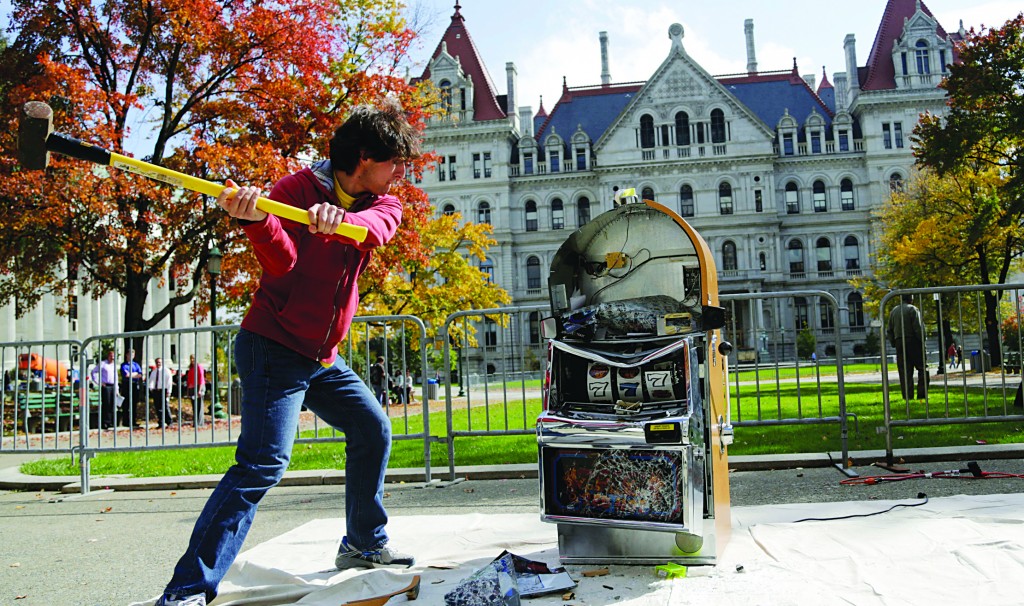 A group lobbying against voter approval of seven more casinos in New York state protested language in the referendum promising jobs and better schools if it were approved without mention of the degraded quality of life and gambling addictions such behavior causes.

Members of the nonprofit think tank Institute for American Values, the Coalition Against Gambling in New York and other anti-gambling activists took turns with a sledgehammer whacking a slot machine in front of the state Capitol. They oppose a Nov. 5 voter referendum that would authorize Gov. Andrew Cuomo’s plan for seven casinos, the first four of which would be located in heavily Jewish Monticello.

“This is not a stunt. This is an effort to try to get our argument out,” said David Blankenhorn, president of the Institute for American Values. “There has not been a single public hearing. Governor Cuomo has not given a single significant speech … so there has been a misleading and a confusing set of arguments coming from the pro-casino side.”

Blankenhorn said most casinos draw from their local communities, hurting their economies by withdrawing cash while contributing to social ills, and he said the state is minimizing the social costs of addiction and crime. Tuesday’s event mimicked the 1934 smashing of slot machines by then-New York City Mayor Fiorello LaGuardia, who called the machines “mechanical pickpockets.”