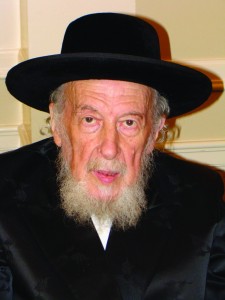 Klal Yisrael lost one of the last remaining links to the pre-war generation with the petirah Monday of Harav Eliezer Ehrenreich, the Mahder Rav, zt”l. Harav Ehrenreich was a son of Harav Chaim Zvi Ehrenreich, zt”l, Rav of Mahd, Hungary, and mechaber of sefarim such as Kav Chaim; Ketzei Hamateh on the classic Mateh Ephraim, on the halachos of Elul and Yamim Nora’im; and Shaarei Chaim on the Shaarei Ephraim.

His grandfather was Harav Yaakov Ehreinreich, zt”l, a prominent askan for Torah causes in the New York Jewish community in the late 1800s and early 1900s. He was great-grandson of Harav Avraham Yehudah Hakohen Schwartz, zt”l, Rav of Beregsazs and Mahd and mechaber of She’eilos U’teshuvos Kol Aryeh (known as the Kol Aryeh after his sefer), one of the gaonim and tzaddikim of Hungarian Jewry in the 1800s.

After the war, he served as Rav in his hometown of Mahd for a short time until the communist takeover. He married Rebbetzin Chana Leah, the daughter of Harav Yoel Zusman Spitzer, in the city of Dezh, Romania. After spending a few years in DP camps in Germany where he had two children, he left with his young family to the United States, settling in New York in 1949.

Rav Ehrenreich was the founder and Nasi of Machon Kol Aryeh, which publishes the works of the Kol Aryeh and his descendants, which he established upon his arrival in America. The machon was in fulfillment of a kabbalah he undertook to publish his forebears’ sefarim if he were to survive the war, when he was in imminent danger of losing his life at the hands of the Nazis in Budapest. Over the next several decades close to 100 sefarim have been published by Rav Ehrenreich through the Machon.

The levayah took place at Beis Medrash Bnei Moshe Mezhibuzh in Boro Park. Harav Avraham Yehoshua Bick, Rav of the shul, where he was a regular mispallel for more than 40 years; Harav Menachem Rokeach, Bertcher Rav, where he davened the last few years; Harav Asher Anshel Katz, a cousin; his sons Rabbi Yoel, Rabbi Chaim Zvi and Rabbi Naftali; and Reb Yanky Ehrenreich, a grandson, were maspid him.

His Rebbetzin was niftar 15 years ago after a brief illness.

A comprehensive article is planned for the weekly Hamodia.

This article appeared in print on page 1 of the October 15th, 2013 edition of Hamodia.