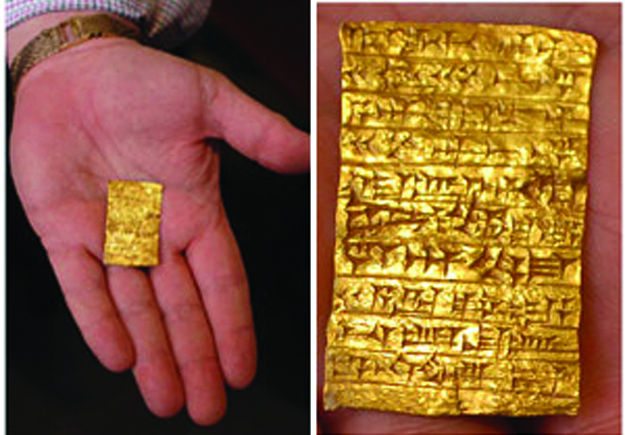 A dispute over an ancient gold tablet pitting a Holocaust survivor’s heirs against the German museum that lost the Assyrian relic in World War II will be argued Tuesday at New York’s highest court.

The 9.5-gram tablet, about the size of a credit card, was excavated a century ago by German archaeologists from the Ishtar Temple in what is now northern Iraq. It went on display in Berlin in 1934, was put in storage as the war began and later disappeared.

Riven Flamenbaum, z”l, who died in 2003, brought it to the U.S. after surviving Auschwitz. Family lore says he had traded two packs of cigarettes to a Russian soldier for the tablet after the war.

“Part of the problem was that since the museum waited until after he died to make a claim, I have not heard testimony in court as to how he got it,” said Steven Schlesinger, representing the estate. “Anything the heirs can say would have been hearsay.”

Flamenbaum, born in either 1910 or 1911 in Poland, spent the war years in Auschwitz where his wife and children, Hy”d, were killed. He remarried and had three children, Yisroel, Chana and Helen. Flamenbaum and his family were members of Great Neck’s Young Israel.

As a result of his trading in the Displaced Persons camp after the war, Flamenbaum also had an extensive coin collection, though nothing remotely approached the value of the gold tablet.

In fact, the tablet, which now sits in a safe deposit box in New York, contained instructions by the Assyrian king — who ruled over the powerful Kingdom of Ashur during the time of the Shoftim — on the upkeep of a temple. One estimate put its value at $10 million, and the family wants to donate it to the Holocaust Museum in Washington.

“There are only four of these things signed by this king — two silver and two gold,” Schlesinger said. “Three went missing at the end of World War II; the [Berlin] museum has the one silver one.”

The Court of Appeals will decide whether the museum waited too long, more than 60 years, before trying to reclaim it. A Long Island judge said it had unreasonably delayed, but a midlevel court last year ruled the other way. The judge erroneously thought the museum knew in 1954 that the tablet was in New York and didn’t pursue it, while the midlevel court concluded it didn’t know until 2006, when its claim was pursued.

The tablet dates to 1243 to 1207 BCE, the reign of King Tukulti-Ninurta I of Assyria. It was excavated by German archaeologists from about 1908 to 1914 in what was then the Ottoman Empire, with Germany giving half the found antiquities to Istanbul, Raymond Dowd, attorney for the Vorderasiatisches Museum, said. The modern state of Iraq has declined to claim it.

In 1945, the Berlin museum was overrun, with many items taken by Russia, others by German troops and some pilfered by people who took shelter in the museum. The museum director could only say that it disappeared.