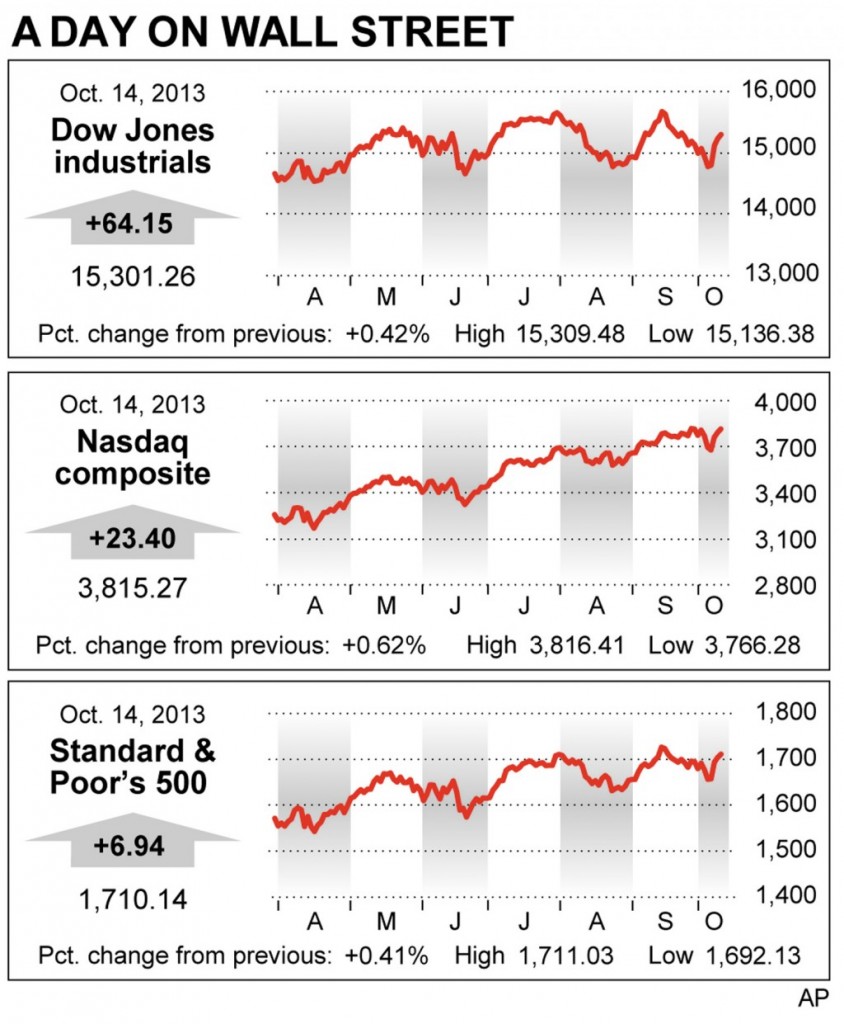 Stocks rose Monday, helped by signs that Washington was moving closer to a deal that would avert a default by the U.S. government.

The stock market started the session broadly lower after negotiations between the White House and House Republicans broke down over the weekend. However, stocks erased those losses in early afternoon trading following news that President Barack Obama would meet with Congressional leaders.

The market extended those gains after Senate leaders in both parties said progress was being made.

Democratic Majority Leader Harry Reid opened the Senate session Monday by saying he was “very optimistic we will reach an agreement this week that’s reasonable in nature.” The Republican Senate leader, Mitch McConnell, seconded Reid’s view, saying there had been “a couple of very useful discussions.”

Monday’s modest gains follow a surge in the market last week on signs of progress between Congressional Republicans and the White House. The Dow jumped 323 points on Thursday, its biggest gain of the year, and rose another 111 points Friday.

Investors continue to express hope that a deal can be reached before the debt crisis causes any lasting damage. In the last few years, political deals over major budget disputes have gone down to the last minute.

“We don’t need some well-crafted, detailed deal,” said Quincy Krosby, market strategist with Prudential Financial. “We just need to buy some time so they can keep negotiating.”

The U.S. government remains partially shut down because House Republicans want to attach conditions to a budget bill that would scale back the country’s new health care law. President Barack Obama is insisting that the government be reopened without strings attached. The partial shutdown is entering its third week.

“We’re basically trading on the news at this point,” Lynch said.

Wall Street also has a busy week of corporate earnings to work through. Coca-Cola, Johnson & Johnson and Citigroup report their results Tuesday.

Bond trading is closed in observance of Columbus Day. Due to the holiday, trading volume was lighter than normal at 2.6 billion shares.