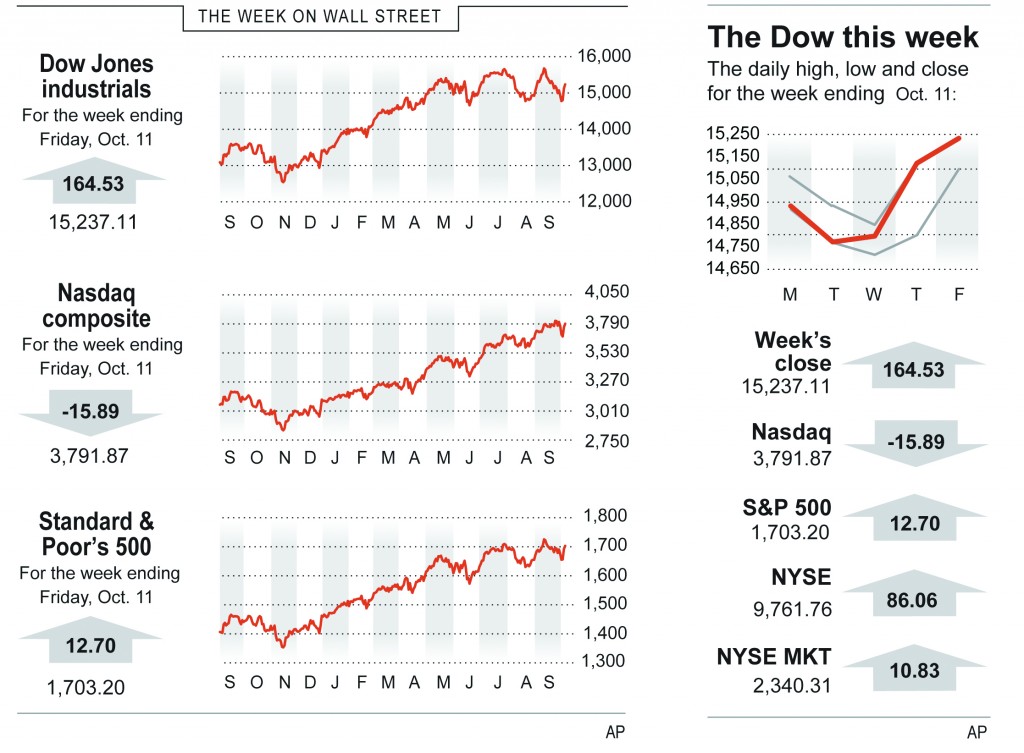 The closer Washington gets to a deal over the debt ceiling, the higher stocks go.

Stock prices rose for a second day in a row on Friday as investors bet against a U.S. debt default. The Dow Jones industrial average rose 111 points Friday, bringing its two-day gain to 434. Its jump on Thursday was the biggest this year.

Call it the Sigh of Relief Rally.

A partial government shutdown pushed the Dow below 15,000 this week before President Barack Obama and House Republicans met on Thursday to talk about the outlines for a possible deal. Obama and Republican senators met on Friday, too.

Stocks set new highs in mid-September but declined steadily since then as the federal government got closer to the partial shutdown that began Oct. 1. That shutdown entered its 11th day on Friday.

“It’s nice when the world does not revolve around politicians making decisions for Wall Street,” said Ralph Fogel, investment strategist and partner at Fogel Neale Partners in New York.

Kim Forrest, an equity research analyst at Fort Pitt Capital Group in Pittsburgh, said it’s too soon to assume that the meetings in Washington will avert a default.

“That’s super that they’re talking to each other, but what on Earth is the agreement going to look like, and is it going to stave off default? I don’t think we know that yet,” Forrest said. “I think the stock market is getting ahead of itself.”

All 10 industry groups in the S&P 500 index rose, led by energy and technology companies.

The price of crude oil fell 99 cents to $102.02 a barrel after a report showed growing supplies of oil outside of OPEC.

The yield on the 10-year Treasury note rose slightly to 2.69 percent from 2.68 percent.

The stock gains were enough to put the big indexes back into positive territory for the week, other than the Nasdaq, which fell almost a half-percent this week.

Among other stocks making notable moves: