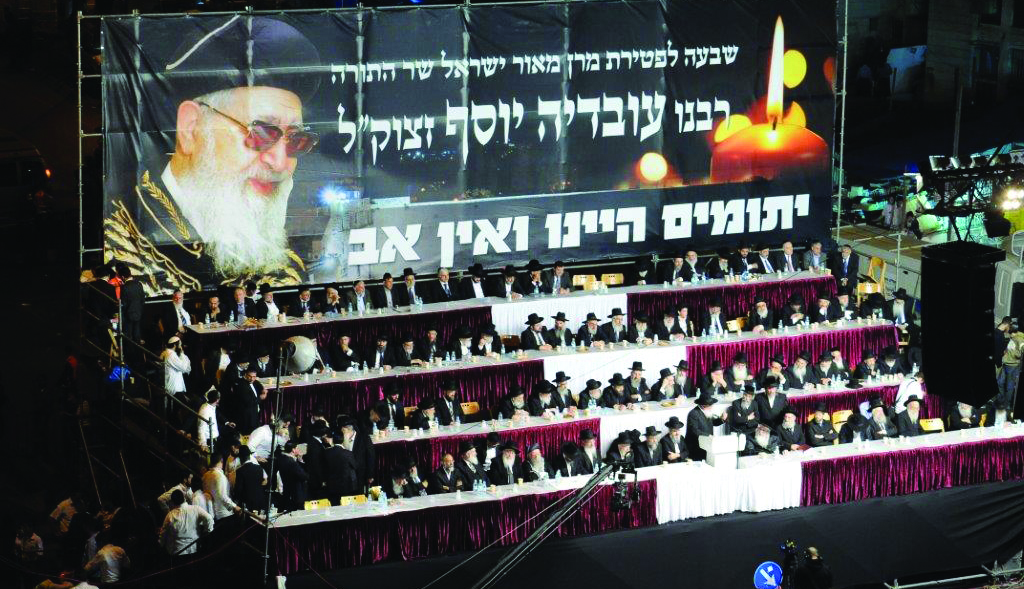 Leading Rabbanim from across the Torah spectrum presided over a gathering of tens of thousands on Sunday to mark the end of the shivah mourning period for Hagaon Harav Ovadia Yosef, zt”l, near his burial place in the Sanhedria section of Yerushalayim.

Police closed Chativat Harel St. Sunday morning to allow the building of a huge, multi-tiered dais to accommodate the many Rabbanim. Other streets leading to the intersection of Bar Ilan and Shmuel Hanavi Streets were closed at about 3:30. The cemetery itself was closed to unauthorized persons from 2:00 p.m.

By the afternoon, throngs of people were already arriving for the event, scheduled for 6 p.m.

By evening, the dais was an unforgettable display of kavod haTorah, as some 200 Rabbanim participated in the historic event. Behind them hung a huge photo of the Rav with the words, “We were orphans and there is no father.”

The evening began with a recitation of Tehillim led by Harav Yaakov Ades, who frequently broke down in tears.

Harav Shalom Cohen spoke at length about Harav Ovadia Yosef’s legacy, saying that Harav Ovadia had ruled that no principal of a Talmud Torah may deviate the derech passed down to us. At the end of his speech he announced that Harav Ovadia had wanted that his son, Harav Dovid, Rav of Har Nof, to join the Moetzet Chachmei HaTorah, the rabbinical council that guides the Shas party.

Addressing the political future of Shas, the party founded and led by Harav Ovadia, Harav Cohen announced that party chairman MK Aryeh Deri was chosen by Harav Ovadia to lead the party, and would continue in that position.

Harav Dovid Yosef, speaking on behalf of the family, stressed once again the great pain his father suffered to his last days from the government’s campaign to draft yeshivah students.

In an emotional hesped, he told of how closely connected his father was with the yeshivah  world, and that he sent his children to yeshivos and Bais Yaakov schools. He indicated which yeshivah each of the sons had attended, Kol Torah and Chevron. He then passionately cried: “The draft decree will be annulled!”

“Abba founded the Shas movement in order to draw Jews closer to the Torah and to support the world of Torah. We are obligated to continue in his path, that all we do should be according to Torah hashkafah,” he said.

“On behalf of my brothers, we must continue in his path, to pasken like he did, according to the Shulchan Aruch, and to be faithful without stint to the Torah outlook.”

Harav David Lau, the current Chief Ashkenazi Rabbi of Israel recalled how, in his youth, he went with his grandfather, Harav Yitzchak Yedidya Frankel, Rav of Tel Aviv, to visit Harav Yitzchak Yaakov Weiss, Gaavad of the Eida Hacharedis, and noticed a copy of the Yabia Omer on a shelf behind Harav Weiss. In response to Harav Frankel’s question whether Harav Weiss used the sefarim, he declared, “Of course! It isn’t possible to rule in halachah without consulting it.”

At the conclusion of the evening, Rabbi Aryeh Deri, chairman of Shas, spoke through his tears of how the Rav, zt”l, “sacrificed so much for Torah education for Jewish children, who represent the future of the Jewish people.”

“After consulting the Moetzet Chachmei HaTorah, and the Rav’s children, it was unanimously decided to rename the Mayan Hachinuch Hatorani educational network ‘Bnei Yosef’ for they are all his children, and he is their father,” he announced.

“We all ask that as he stands before the Throne of Glory, he should cry out for us, and hasten the Geulah Sheleimah, the Ultimate Redemption, speedily in our days, Amen.”

While the huge gathering marking the end of shivah for Hagaon Harav Ovadia Yosef, zt’l, was taking place on Sunday evening in Yerushalayim, the headstone was placed at the kever in the presence of a limited number of people who were very close to Harav Ovadia. The cemetery, in Sanhedria, Yerushalayim, was otherwise closed to visitors by the police.

Shortly before 9 p.m, the eldest surviving son, Harav Avraham Yosef, Rav of the city of Holon, was called to the cemetery. Standing at the kever, were Reb Tzvi Chakak, the faithful assistant to the Rav zt”l, and two others.

A hakamas matzeivah ceremony will take place Monday, and will be attended only by close family. The cemetery will be closed to the public until it is over.